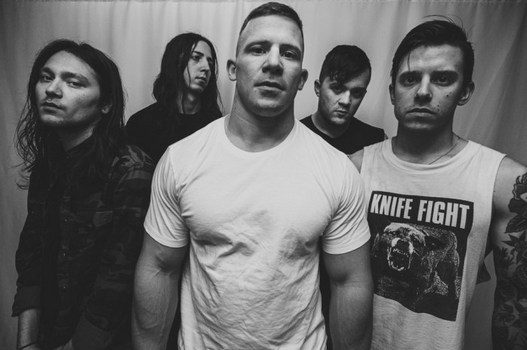 Those with their ears to the ground within the extreme music scene have no doubt already witnessed the heaviness and expansive nature of Harms Way. Hard to truly pigeon-hole, they take a massive piece of aggression with them, but aren’t afraid to lace it with some melancholic atmosphere or industrial/electronic effects. Their last album, Rust, opened a number of doorways for the act, one of which was signing with Metal Blade Records and laying the groundwork for the upcoming Posthuman.

Having more of an assertive force than Rust, Posthuman still sticks to the band’s ethos of evolution and outside the box musicianship. It’s visceral, but it’s also thought-provoking and introspective. We were able to grab drummer Chris Mills for a short Q & A about the details of Posthuman, signing with Metal Blade, and how heaviness can be a form of catharsis.

Dead Rhetoric: Could you elaborate on the title, Posthuman, and what it means in regards to the album?

Chris Mills: Thematically, there’s an innate questioning – looking at human nature, the human condition, and the reality that we live in at the moment. We take a look at that and critique it. Posthumanism or posthumanist concepts in several different places – philosophical, cultural, scientifically – those themes can be found throughout the record.

Dead Rhetoric: There were some line-up changes as well. What would you say were Casey Soyk and Nick Gauthier’s contributions to the album?

Mills: Nick took over on second guitar duties and he was really big into the writing process – working with us in a collaborative nature. Mutually, we were able to take the sound to another level with a fresh set of ears. He’s been a close friend of ours for a while and he did a lot of touring on the Rust cycle with us. Casey took over on bass and he was also instrumental in the writing process as well. He really kind of helped refine some of the electronic/industrial components on the record. They were both huge additions to Harms Way and were very helpful in the writing process.

Dead Rhetoric: How do you feel Posthuman feels in comparison to Rust?

Mills: I think Posthuman is a bit more aggressive when compared to Rust. Rust had some melancholy and a bit of mood all over the place. Posthuman is a bit more focused in that it’s really aggressive and in your face – it’s an angry sounding record. That said, I think there’s a lot of dynamic to it. It’s not as moody as Rust. It’s very focused; not that Rust wasn’t, but given the way that writing approach was with Posthuman made it feel a bit more focused.

Dead Rhetoric: At this point do you feel that people anticipate that you will branch out from the expected pathway?

Mills: Maybe – I feel with all our releases from the inception of the band that there’s a lot of dynamic and experimentation that has taken place with each release. People can expect that we won’t be as conventional as your typical hardcore or metal band. That’s something we pride ourselves on as songwriters and creators. That’s just who we are as people and as musicians. It would be really hard for us to create cookie-cutter records or mold ourselves in one specific way. I think you can always expect us to keep evolving and pushing the boundaries, and to think outside the box as far as songwriting is concerned.

Dead Rhetoric: With that in mind for Posthuman, is there anything you think people will be surprised by, in a general sense?

Mills: I think maybe tracks like “Temptation” and “The Gift,” where there are some different vocal deliveries as far as what James [Pligge] is doing, and what we are trying. People might be surprised with those dynamics and that range. But as a whole, I think for any Harms Way fan, they won’t be too surprised with the steps we are taking. But for those who don’t know much about us, and have kind of pre-conceived ideas on the kind of band we are, they will be pretty surprised with the overall vibe of the record and its overall range and dynamic.

Dead Rhetoric: What do you feel the band gains from the combination of hardcore, metal, and industrial influences?

Mills: For us, it just makes for really interesting music, and an interesting creative process. Like I said earlier, we don’t like to write the same thing over again – that would be kind of soul-crushing for us. For us and the fans, to pull from the influences that permeate from who we are as songwriters it’s just refreshing. We feel like we create the records we want to create. Whether people love it or hate it, it’s for us. When we finish the record or it’s finally out, we are proud of it. It’s timeless to us, so to speak. The short answer, is that we feel like it’s real and true to who we are.

Dead Rhetoric: It opens up doorways too – if you stuck with just the hardcore aesthetic, you would have one thing and that’s it.

Mills: Totally. It also opens up a lot of doorways for us to share music with people and branch out in that way. A lot of the tours that we have been able to do, we can cross-over through the years due to our range in styles and dynamic. It’s given us a place to grow in a number of different music scenes and garner fans in a lot of different worlds.

Dead Rhetoric: The cover art of Posthuman is pretty incredible. Could you go into some of the thoughts for how it came to be?

Mills: The sculpture on the cover was produced and created by a Canadian sculptor named David Altmejd. We are fans of his work, and a lot of his stuff has to do with these human-like sculptures like you see on the cover of Posthuman. The original work is actually called “The Eye,” which was released in 2015. But we were able to get connected to him from a friend of a friend. We messaged him and said we wanted to use some of his stuff and produce the visual representation of Posthuman. Luckily, he was really cool and into the idea and we took it from there. So we started a working relationship with him.

A friend, Aaron Roth, put the visual components of the record together with his [Atlmejd’s] work, at the graphic design level. It all came together in that way. We feel that it really represents the themes of the record. At first glance, it looks like something that had its face blown off, but as you dive into the piece, you can see the intricacies and that it’s actually something beautiful – things like the coloring and the textures. With the idea of Posthuman, pushing beyond what it means to be human, we feel like that piece really displays those emotions and ideas.

Dead Rhetoric: How’d the signing to Metal Blade come about?

Mills: Initially, Andy from Everytime I Die was doing some A&R work for them, and he had reached out to us and started having conversations about it, and that they [Metal Blade] were interested in the band. He kind of opened up the doorways of communication with Metal Blade. This was shortly after Rust came out. Then we started the extensive touring cycle for Rust. We were on tour with The Black Dahlia Murder at the time, and Metal Blade was flying out to a few shows to check out the tour, and check us out, which led to more conversation between us and the label.

Fast-forwarding 6-9 months later, after going through negotiations and contract stuff that comes with signing with a label, we ended up signing with them. We felt like it was a natural progression for us to continue to grow and connect with a wider fanbase. We still feel like we are in the infancy stages of the album, so we’ll see how it goes, but there’s been nothing but positivity and we are just hoping to connect with as many people as possible through the process.

Dead Rhetoric: In more recent years, it’s come up more for you due to expanding from the hardcore background and still talking about the hardcore genre. So what does it mean to be hardcore and have that hardcore aesthetic?

Mills: I think for us, we will always be a hardcore band in the aesthetic sense. In that, ‘no frills, no bullshit, no rock star mentality.’ That’s more hardcore and punk rock than anything. Given our progression with sound, and our no fear attitude with it, we feel that’s more hardcore/punk rock. For us, it’s a world and culture that we are a part of, and fond of, given our background and history. As well as our philosophical approach to running this band. No matter how many big metal tours we may do, the band always operates with that DIY, punk rock mentality. A lot of that comes from the world that we were brought up in, as young kids going to punk and hardcore shows, as well as the world that Harms Way came from.

Dead Rhetoric: As a band that can convey heaviness, do you view that heaviness as a form of catharsis?

Mills: Yes, absolutely. Harms Way has always been a pretty big outlet for most of us. Heavy music is a place for the release of emotions, whether it’s negative or positive. But I can say for all members of this band, heavy music has been a cathartic outlet for all of us.

Dead Rhetoric: If you were to sum up Harms Way from a musical standpoint, what is the band all about?

Mills: The band is really all about creative expressionism. It’s about a release. It’s about self-expression. And it’s about coping and resilience as well. Life is hard. Life isn’t easy or fair – that’s something that we need to accept as a people and as a culture. In many ways, Harms Way has a ‘face it and deal with it’ mentality. It’s having an outlet and release for those day to day things that life presents to you.

Dead Rhetoric: What plans do you have following the release of the album in February?

Mills: Shortly after the record released, we will be embarking on a US tour with Ringworm, Vein, and Queensway. After that we are going to do some shows in Mexico and we are booking a European run to also support the release. After that, we are going to try to do as many support tours as we can, to try and present our stuff to as many people as possible. The hope is also to get back to places like Japan, Australia, and Southeast Asia – places we toured with on the Rust cycle and had a really awesome time and experiences. 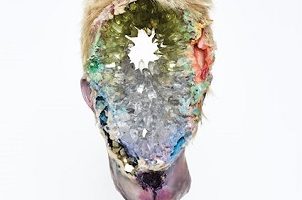