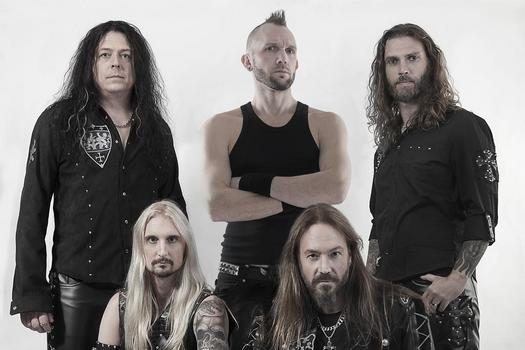 Dead Rhetoric: This is also your first record with your new label Napalm Records after spending your entire Hammerfall career on Nuclear Blast. Was it time for a fresh start, and do you enjoy the challenge of how another strong metal label will handle activities for the band?

Dronjak: The reason we left Nuclear Blast was it’s not like we had any real disagreements with them or anything. It was more a case of us after 18 years wanting to try something new. We wanted to find people that actually believe that Hammerfall can still grow, and not just (be) content with releasing an album in the same way that they have done because if it’s worked in the past, it will work now. We wanted them to help us further our career, and make us feel that we have a chance at doing that. With Nuclear Blast, it’s now a case of them having way too many bigger bands, and we would be lost in the shuffle. With Napalm, they don’t have that- I think Napalm is like Nuclear Blast was 15-20 years ago. That’s the type of feeling I get, they have a young and enthusiastic staff of people. Although smaller, they are on the rise- and that’s what made the difference for us in the end. We were never dissatisfied with Nuclear Blast, we just wanted to move on to keep things fresh.

Dead Rhetoric: Outside of a couple of 70,000 Tons of Metal cruise appearances and the ProgPower USA festival, your last touring run in the United States took place in 2010. Are there any particular reasons or circumstances behind this?

Dronjak: Not really. It wasn’t a conscious decision or anything. It was more a case of taking a break for 18 months of everything Hammerfall between the end of 2012 to the recordings of (r)Evolution. It was more a case of trying to tour there- we have done many tours there. Everybody has told us that if you want to make it successfully in the United States, you have to tour over here 2 to 3 times a year. We never believed in it enough I think because the US has always been one of those countries where it’s so big it would be very expensive to tour there no matter how you do it. It’s also one of those countries from our point of view, they don’t always appreciate the type of vocals we have or the music that we do- it’s not aggressive enough or not angry enough. It’s not screaming enough. Obviously there are heavy metal fans over there as well, it’s more a case of we didn’t believe that you guys would come to the shows, and the amount of people necessary to not lose any money on the tour. We didn’t say this out loud, it just happened. We are going to do another tour of the US in April and May of next year.

Dead Rhetoric: Hector appears again on the cover – your legendary mascot a la Eddie for Iron Maiden. Discuss the particular theme for this record in terms of the artwork – and how important you believe these visual representations are for the heavy metal genre as a whole?

Dronjak: I think they are extremely important. You mention Iron Maiden’s Eddie – that was the inspiration for us. We said to Andreas Marschall, the artist who created Glory to the Brave 20 years ago- we told him we want a mascot or warrior that can be our guy. You look at him on the album cover, and you will know that this is a Hammerfall record. And we mentioned Eddie as an inspiration. He created this guy who we named Hector after a couple of years, and I think that visual thing has always been very important for heavy metal. It may have got lost in the shuffle in the 1990’s and it’s one of the things that we wanted to bring back- the total package of a heavy metal band. If you look back to the 1990’s, people had album covers but the covers were like the music- very aggressive and rhythm based. I would say monotonous in a way- nobody was really doing the big stage shows anymore, not even Iron Maiden was doing the big stage shows.

We always saw Hammerfall as the kind of band that wants to do the stuff that we saw our favorite bands do in the 1980’s. Of course, we know that the 1980’s was a much bigger time for this type of music but we wanted Hammerfall to be the band we always dreamed about. Stage clothes also matter- that was something that if you had an image in the 1990’s, you were a poser. I remember this a lot of times- if you focused on what you were wearing on stage instead of just wearing shorts and a plain shirt, whatever was the fashion of the time- you were labeled a poser because you were thinking about the image more than the music. I always thought that was complete bullshit because you don’t have to be either or. It didn’t take many years to think the way people did in the 1980’s, that we need a look as well as the music. It’s one of the accomplishments that we helped bring back that I think nobody talks about, ever. If you look at any band today, they do these computer-generated backgrounds, and all of them are wearing some sort of leather outfits. They have some kind of theme going on – and that’s the way I think it should be. Our theory is, if you are going on stage, it should be special. It shouldn’t look like you just woke up and got out of bed, it should look like… maybe not like the way Kiss did, but it should be a special occasion witnessing this band on stage, and we have always tried to do that.

Dead Rhetoric: Has it been harder to maintain your success given the way Glory to the Brave re-ignited the traditional/power metal scene in the mid 1990’s, or is your definition different than necessarily physical marks like album and ticket sales?

Dronjak: It’s definitely not been hard. Like I talked about before, we had a vision for Hammerfall. What we wanted this band to be, basically – and the way to follow that vision. And luckily, there were a lot of people who have shared that vision with us. They enjoy what we are doing so we are able to do this on a great level. I don’t know if … ticket sales are great because that always means that you can do again next time. Hammerfall is my life and it’s my livelihood- it’s been that way for over twenty years now. I don’t care, I don’t have to make millions of dollars every year- obviously I don’t. The point now that we are at in the band is everybody has families and responsibilities outside of the band, so we can’t go on tours where we lose money all the time, which has happened in the US. It’s so much more expensive with the visas and the flights alone. I’ve never measured success in a place like that because Hammerfall is a personal success. I’ve got to do exactly what I want for the last twenty years. That for me, is a personal fulfillment. And of course it ties into ticket sales and people liking what we do but I think we’ve been very non-compromising with the direction we’ve gone in- no matter what the people around us have told us. We have always followed our own path- and that’s what I’m going to be the most proud of when all of this is over with.