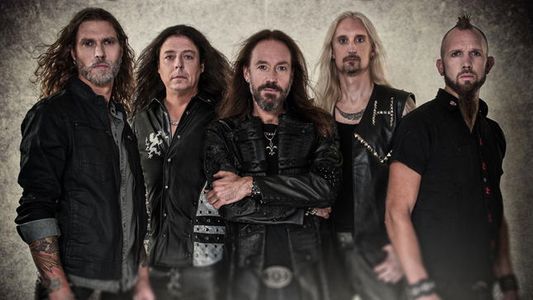 Long-time flagbearers for traditional metal, Hammerfall rose up during a period of time that was not exactly friendly to the genre. More extreme styles had become en vogue and the thought was that heavy metal, in the traditional sense, was old news. But with their first few albums, Hammerfall defied the tide and helped give the genre a fresh perspective and ushered in a new wave of enthusiasm for heavy metal most pure. Twenty years after their debut, Glory to the Brave, they are still standing – proof that the band has tapped into something truly timeless.

The band’s latest release, the aptly-titled Built to Last, continues the Hammerfall traditions of anthemic, hammer-raising songs that the band has long been known for. Embarking on their first North American tour in seven years with co-headliners Delain, the band is at full speed in retaking the territory. With their rousing live persona and the fans ravenous from the wait, it all combines into a spring event no one should miss. We grabbed bassist Fredrik Larsson for a few minutes before the band took to the stage early in the tour at Stage 48 in New York City to get a better feeling about the band’s current journey.

Dead Rhetoric: It’s been seven years – what made you finally say, “Hey, let’s come back and tour the States?”

Fredrik Larsson: There was never any doubt that we should go back, it just happened to take a much longer time than we expected. We always want to try to conquer new territories and of course, America is one of the [places] we want to tour in. We will come back – hopefully it won’t take as long for the next tour [laughs].

Dead Rhetoric: Along with that, you’ve released all these albums in the time between your last stop here. How do you figure out, even for a headlining show, what should make it into the setlist?

Larsson: That’s becoming much harder. We tried to get some new stuff in, and of course there’s a couple of songs that we have to play or the people won’t like it. They demand certain songs…we’ve done our best to pick some personal favorites and some demands. It’s harder but I think we have a good mix right now.

Dead Rhetoric: It’s only a few days into the tour, but have your expectations been met so far?

Larsson: Way better…these first shows have been really great. We hope that we can continue to ride along and keep doing great shows.

Dead Rhetoric: Playing traditional heavy metal and sticking with it for so long – how much of an impact does the passion behind it play into the success of the band?

Dead Rhetoric: The new album is called Built to Last, and there’s that obvious link to the band surviving this long. But what do you feel has made the band stick around over the years?

Larsson: I think passion is definitely one part of it. When we recorded the first record in 1996, people thought that we would never release another album. But we were strong and convinced that this was what we wanted to do. We kind of conquered and won over a lot of people at once. That’s the thing that made us big in the beginning. We just play music that we want to hear ourselves.

Dead Rhetoric: How do you work to keep a sound that’s rooted in tradition from sounding too dated?

Larsson: That’s something we have to work a lot on, keeping it fresh and updated. When I look back, there’s a lot of bands that I didn’t listen to that maybe Oscar [Dronjak] and Joacim [Cans] listened to a lot. They tell me to listen to something, but when I hear it, it’s so dated. I can’t even listen to it. They may have had great songs, but if it’s not up-to-date it’s so hard to get into it. So it’s really important. We listen to a lot of new music ourselves, so we know what we want to sound like and we also have Fredrik Nordström, who produced our last two albums – he did a great job making us sound fresh while staying true and making it sound like old school heavy metal.

Dead Rhetoric: In terms of heavy metal itself, being a part of a band that plays a more traditional sound, what does it mean to you?

Larsson: That’s the style I grew up with. It’s what I loved – when I was a kid, I never believed that I would listen to anything else [laughs]. Of course, you grow up and I listen to a lot of different genres. I still think it’s really fun to play, and express myself in that heavy metal sound. As long as we love it, we’ll keep doing it. We all bring out influences into Hammerfall – that’s what makes it Hammerfall. But at the same time, we have really strong boundaries for what Hammerfall is, and what old school heavy metal is to us. We still can bring in some of our influences though, to keep it fresh.

Dead Rhetoric: A couple years back, the NHL team Minnesota Wild used “Fury of the Wild.” What was it like for you guys, knowing that there was a professional hockey team out there using one of your songs?

Larsson: It was amazing. To see the Minnesota Wild have our music was just fantastic. We actually got footage from a fan who was at a game a few days ago, and they showed us doing that song on the live video on the big screen for everyone to see. That was cool.

Dead Rhetoric: You touched upon this already, but when Glory to the Brave was released, there were a lot of people that said you weren’t going to go anywhere with it. So was it a surprise that the album ended up rejuvenating that style at the time?

Larsson: It was a big surprise. When we made the album, we did it with heart and we went all in with the leather and studs, and the whole approach to it. People were basically laughing in our faces. But we thought that if we were going to do it, we should do it full-on. There’s no meaning in doing it halfway. It’s all the way or nothing. So we did it, and I think people saw that it was full of heart. That was a big thing. Then everything happened real fast. We had a few years before we made the record that we did 1-2 shows a year. There was a rock contest that we usually did in Gothenburg, but never anything big. Then all of a sudden, we had a record deal and we put out a record – it all happened so fast. I think the first show outside of Sweden was at Wacken Open Air, which is a huge festival.

Dead Rhetoric: Being from Gothenburg, at that point in time, it was arguably the peak for the melodic death metal sound. What do you recall about that time?

Larsson: There were many bands, but it was kind of a small scene. Everyone went to the clubs and supported each other. We all knew about each other, so we were supporting each other. That was one thing that made everything so big with the Swedish death metal/Gothenburg sound. It was like a snowball effect. If one band could get on these big support tours, other bands thought they could do it to…it was a great time.

Dead Rhetoric: What do you feel defines the Hammerfall live experience, as opposed to listening to an album at home in your house?

Larsson: I think all the songs are revitalized. We tried to capture that live energy on record, but it’s really hard to get that experience. At the same time, it’s a big show. We go 100% and give it all to entertain. If we get the reaction back from the audience, then they are going to get even more. I think Hammerfall live is Hammerfall at 120%.

Dead Rhetoric: Do you feel that since (r)Evolution, the band has been rejuvenated as well?

Larsson: Yeah, we took 2013 off to think about what we wanted to achieve and if we wanted to continue. The thing is – we all took the year off to come back stronger, but at the same time, it’s hard to know what is going to happen after one year. Everyone got together and came back into the studio and we were like “shit, we’ve got to do this and we’ve got to do it good.” It felt really, really great to be back in the studio and do something together, because it’s what we want to do.

Dead Rhetoric: So you have this tour with Delain, the album [Built to Last] was released last year. Do you have more plans for tours at this point or maybe start the writing process?

Larsson: We have a lot of festivals in the summer and some small tours in the fall. Next year we have no plans but we are going to record a new album. We’ll probably do something more, and maybe some more tours/festivals but we are planning for the next album, absolutely.