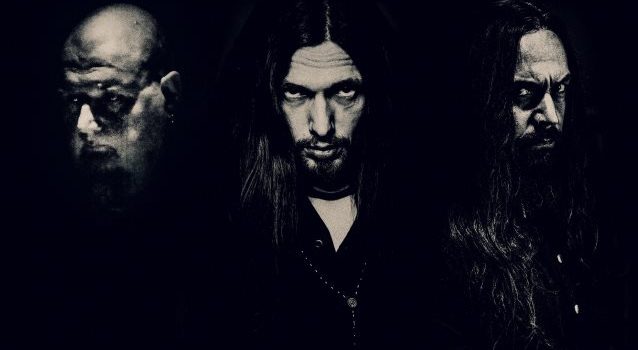 Noticeably absent from Swallow the Sun’s recent run of touring in support of their triple Songs from the North album, guitarist/primary songwriter Juha Raivio has poured his creative heart and soul into Trees of Eternity and Hallatar. Both bands were created to honor the life of his partner, Aleah Stanbridge, who passed away in early 2016. After getting Trees of Eternity out of his system last year, Raivio turned his attention to the funeral doom marches of Hallatar, writing the band’s No Stars Upon This Bridge debut in a short period of time. He’s joined by Amorphis throat Tomi Joutsen and former H.I.M. drummer Gas Lipstick, resulting in a churning, gut-wrenching album that pays further homage to Stanbridge. As he continues to keep her memory alive, we sent over some electronic Q’s for Raivio to answer. Here’s the scoop:

Dead Rhetoric: You’ve written tons of songs, not to mention several albums. But, was No Stars Upon the Bridge the first time you wrote an album in such a short period of time?

Juha Raivio: I have always written albums quite fast when I feel that the music and lyrics come to me naturally. I never push any writing I do and just wait for the certain signals within and to the gates to open between the worlds and then just let it out whatever comes. I don’t write songs or play guitar basically at all on purpose and sometimes I can go months not writing anything as I like things to pile up inside me and then I let everything come out in a huge flood and just go with it without thinking about it and just creating what comes out without any pushing. But I have never written album in only one weeks’ time for sure. And that week this music came out I have no memory of writing it, I never have had this big black out before about writing album. I remember just taking my guitar in my hand and I told myself “Now it is the time,” and I remember the promise to myself that I won’t change absolutely anything of the music that comes out, no matter what it is as it will stay as the most honest painful blueprint of the moment.

Dead Rhetoric: Did, at any point, you stop and go “Hey, these songs are good enough for Swallow the Sun?” (They really are.)

Raivio: Songs from the North triple album was already such a personal and painful trip and process that I didn’t want to put the boys through it again with this music. And I also felt it is not Swallow the Sun album, even of course the music is much alike as I write all the music for both bands. But it didn’t feel right to do this album as a Swallow the Sun album.

Dead Rhetoric: Tomi is easily one of the best vocalists in Finnish metal. You’ve worked with a guy like (Swallow the Sun vocalist) Mikko (Kotamäki) for so long, but what was it like working with Tomi?

Raivio: It was such amazing experience. I only work with the musicians who play or sing straight from their soul and Tomi’s attitude and performance left me speechless to be honest. We didn’t practice at all before going into the studio as I wanted also them to record their parts with absolute emotion in the songs at the moment it comes out. If you rehearse and practice too much it can easily come something that you start to overthink and will lose the soul and the magic of the moment. We recorded everything very very fast and didn’t do many takes at all and just let everything flow naturally into the songs with open heart and soul. Watching Tomi put everything he has in his heart into the words and singing was very powerful experience. Also Tomi and Gas are such a warm and wonderful people, they are both very deep and honest artist and you can really hear it from their work on the album. Tomi was also a good friend of Aleah as Aleah sang on the latest Amorphis album, so it was hard job for him too to sing these songs. Im very proud of Tomi and Gas, this is not easy to anyone.

Dead Rhetoric: His death metal vocals, especially his deep grunts go quite well with the slower, funeral-like music you created. Did his vocal range take you by surprise?

Raivio: No it was not surprise to me as I know what the man can do, but I knew that his deep grunts will be most powerful with this kind of slow and heavy music. And I also wanted him to do higher screams and use all the styles I know he can do and have in him. He really put every bit of him into this album and his singing and same goes with Gas on his drumming, every hit became with such power and heart. Such a blessing to be able to work with these boys.

Dead Rhetoric: Would you say the Hallatar album is more personal and in-depth than last year’s Trees of Eternity album? If so, why?

Raivio: Every album I do is highly personal, I would not do anything else. But I never would want to write this kind of album to be honest. I wish for the rest of my life I would have not have to write this Hallatar album. But honest music always have also a lot of healing powers in it, even it rips your heart apart each time you hear it. But no album in this world will be more important for me for the rest of my life than the Trees of Eternity’s Hour of the Nightingale album. Aleah’s and mine Trees of Eternity album is the album of my lifetime and most precious thing for me for the rest of my life. Me and Aleah crafted that album as the most perfect black jewel with light shining through, and we had a big plans for the future. It breaks my heart every day that I can’t record more music with Aleah ever again or hear her voice next to me, not in this dimension at least. But she writes in and through me for the rest of my life, as you can hear already from this Hallatar album. She was the most honest and pure artist I have ever heard or met in my life, I learned so much from her. She was not from this world, everything about her told about it. I was so lucky to share my life with her for eight years.

Dead Rhetoric: Aleah obviously had a gift both as a vocalist and lyricist. What resonates with you the most with regard to her lyrics?

Raivio: Her absolute honesty of facing and embracing the darkness and light and bleeding it to the music and the paper without any fear, that was the most powerful thing about her words and of her voice. I have never heard a voice more pure and fragile but same time most powerful voice I have ever heard. Even Aleah’s breathing sounds between the words have more power than any growl or opera singer I have ever heard in my life. That is the true magic of her velvety voice that it held the powers of the whole universe in it.

Dead Rhetoric: What kind of potential do you see in Hallatar? Could it evolve into having a full lineup with possible live dates?

Raivio: We do have a full lineup for the band for the coming gigs, if and when we do them. Tomi will be so busy with Amorphis again next year that it won’t leave that much time to do Hallatar gigs, but we hope to do some special gigs at least.

Dead Rhetoric: Aside from working with Gas and Tomi, what was the most rewarding aspect in putting Hallatar together?

Raivio: I promised to Aleah and to myself to bring as much of her music and words to the world as I can, no matter how painful it is to do personally. And to bring her voice and words to the world to hear is more rewarding than anything else. This plastic and hollow world needs a voice and words like hers that really can open your heart if you let it. After the Hallatar album I will go back working on Aleah’s solo album that I hope I can release 2018, or 2019. And I also have some Trees of Eternity demo songs written for the second Trees of Eternity album that we started to write. Maybe in couple of years we will record those demo songs out and use Aleah’s demo vocals in it and release it as a EP or something. There is such a powerful music in there. I really hope I can get them out also in some point.

Dead Rhetoric: You have been noticeably absent from Swallow the Sun’s recent tours, in particular, over here in North America. Do you have any plans of resuming live work full-time anytime soon?

Raivio: I have now slowly started to play some shows again and I hope I can do all the remaining gigs now for this year and couple for next year. All the Swallow the Sun music and songs are so personal that it is very hard to perform them in front of the people at the moment, much more hard than before. But I have to step into the fire now I think, or at least I will try it out and see how it goes.

Raivio: First to release this Hallatar album and do all the possible press out of it and share the album and the music with people. Then I will tour Finland with Swallow the Sun as we will play our Hope album’s 10 year anniversary shows there. Swallow the Sun will also play Doom Over Kiev festival in October and in November, we will play the Metal Gates Festival in Bucharest. Then it’s already end of the year.