Blistering.com: “To Walk Among Them” might be your boldest statement to date. To you, what does this song represent and is it safe to say it’s Hacride’s most “epic” song?

Grousset: I think you can say so yes, even for us it’s “epic” to play on stage. Indeed I told you we wrote the album like a book so “To Walk Among Them” is the introduction of the book. It sets the scene and the character. Many people told us we should put this very long song at the end of the album cause it was risky to put it at the beginning, we tried, but it didn’t work with the rest of the album so we though “fuck it, that’s how we want to do it, that’s how we’re gonna make it” and here it is as the first track.

Blistering.com: To these ears, Lazarus sounds like a more confident and self-aware effort; you can’t really pinpoint one exact sound or band to reference. How do you plan on developing Hacride’s sound?

Grousset: That’s hard to explain cause if I could explain what I want with words I wouldn’t do it in music. Again, we just follow our guts and what we feel is right, we try to find our own way, not just to be original but just to make music the way we feel we have to. With every album we try to go further so it always gets harder but that’s why it’s interesting. We want to give the best of ourselves every time in studio and on stage as well. That’s it, going further, our own way, step by step.

Grousset: As you might know, Saint Lazarus have been raised from the dead by Jesus in the Bible and there is a disease called the “Lazarus Phenomenon” that got its name from that story. The Lazarus phenomenon happens to people after NDE (Near Death Experience), they just die some seconds or some minutes then they come back to life, everything seems back to normal but inside they don’t feel in adequacy with the world anymore, they are more sensible, they feel hurt very easily. The main character of our story has this sensibility, it can be anyone ‘cause I think it happens to everyone at some point to be on the edge, to feel down and apart from the world we have in front of our eyes. The album talks about those emotions, those feelings, and the fact of having a mask to protect from the lies but a mask that is a lie itself.

Blistering.com: How annoying are the Gojira comparisons?

Grousset: That’s a good question! I was wondering why you were not talking about Gojira yet, that was weird, but here we go. It’s nice to have a band like Gojira in our country that is going aboard and now playing with Metallica, that’s just great and if it can draw attention of the crowd on the French metal scene it’s nice and not only for us. But I have to admit it’s a little bit annoying ‘cause we are compared to Gojira everyday, I know it’s because there are not many French bands well known but Gojira. It’s like everything: there are advantages and disadvantages.

Blistering.com: Is there a French metal sound? There are so many unique bands coming out of the country, that it’s hard to pick one sound/style…

Grousset: I think that compared to the others, French bands have something to prove ‘cause our country never had been important in heavy metal history. Of course we have some bands that did good back in the days like Trust which is more known ‘because Anthrax covered their song “Antisocial,” but they never reached the level of American, English or German bands. We had Loudblast as well and Massacra but lot of people never heard of them. So… everything about French metal still have to be done, there is no rule and I think that’s why the bands here have a unique sound cause we can do everything that we want, we have no credibility anyway ha-ha.

Grousset: We just come back from some dates in the UK and from the Progpower Europe Festival in the Netherlands, which was just great. Now we’ll finish the year with a French headlining tour. We don’t really know what 2010 will be but touring. I know there are gigs booked and some summer festivals already but I can’t tell! 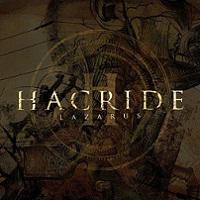