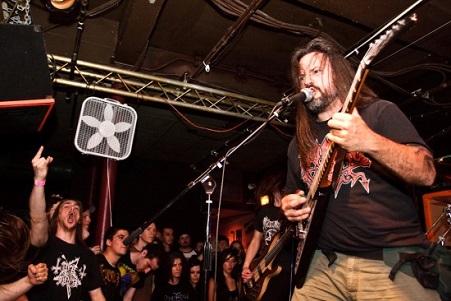 Dead Rhetoric: The textured nature of some of these riffs, like on “Enemies of Compassion” or “Ember’s Voice” is excellent. Did you take on any sort of procession of elimination when compiling riffs for Colored Sands?

Lemay: No – I haven’t more songs then there’s on the record. Kevin and Colin each wrote a song, because at some point, I wanted to write all the music and take their arrangements, but after we had six songs, Colin came up with a song. He emailed me a song one day, and at the beginning, I was like, “I don’t know if I need to dominate the floor here.” It’s my project – not that it’s not their project. It’s like if you’re writer and I go to you, “Hey David, I have this chapter and I really think I should put it in your book.” And you’d be like, “Let me write my story, it’s my book.” That was my position for this. But when I heard the song, I was like, “Holy shit!” And what made me say yes is that it clicked so well and they’re so generous of their talent, very available and that is not to be taken lightly. It was a part of myself saying “I’m so happy to have you and your personality and talent, so this space is for you to express yourself as a composer.” So me, in my place as a composer, I’m going to put myself above or over the music, which they did on my songs, and I did on theirs.

For Colin, I pretty much played what he wrote. I always play my music – I’m not good at playing other people’s music. I did in the past – in Wisdom, Dan [Mongrain] wrote the song “Unearthing the Past.” I can sit down and learn it, but it’s not my nature to work on other people’s music – I can do it. I’m not as gifted as them to write music over other people’s ideas; it’s not my nature. Kevin, you can throw a riff at him and he’ll start messing around it’s awesome. It’s very precious for me to have them in the band. Kevin wrote “Absconders.” It’s a dark song; it’s great. It suits the lyrics really well – Tibetan exile, walking in the snow, very melancholic and dark. It puzzles the record perfectly.

Dead Rhetoric: Moving along, let’s talk about the late 90’s and what it was like to be a death metal band. As a guy who came up through the decade and then had to face an entirely new breed of bands via black metal, what was that like?

Lemay: Not easy [laughs]. Like Obscura, when we wrote that – it was out of the box. Anti-market, anti-everything, and us as artists, we explored all the fast picking and the Suffo-blast-beats; been there and done that. And we’ll leave it to Suffocation because they mastered it, so that’s their thing. So, what do we have to say as artists? When we sat down and said, “Consciously, we’re not going to play any Slayer beats. No fast-picking.” It was anti-death metal guitar playing. We’re either going to have very brutal drumming parts, or slow, open parts. It’s not because the drums are fast, the guitars have to be fast. Consciously, we imposed those limits – grounds that we weren’t allowed to walk in. That forced us to find something different. It brought Obscura to life by rigorously imposing ourselves things to do, and not to do.

By doing this, I remember sending demo tapes and we weren’t getting any response. We were done. I remember in November of 1994 we had finished the record. It came out in 1998. September of ’98, so it tells you what the picture was like back then. Even if we did another Erosion-type record, we would have been stuck in the same type of shoes anyway. Even at that point, this early, the industry was like, “Blah, we went full-circle with death metal.” And even if you came up with a record that doesn’t sound like anything else, they wouldn’t bother because they said they didn’t get it. I don’t like the word “victim,” but we were stuck with the consequences of wanting to experiment.

Dead Rhetoric: And that’s when you ended up on Olympic Records.

Lemay: Yeah! The thing is, every year, we were invited to play shows in Detroit and the Chicago area. Even during the 90’s, we weren’t playing many shows in Quebec. But, we would get phone calls from promoters in Chicago, so we always had fans there. I remember it was in February, very cold and we played The Thirsty Well, super-small club. One of those average shows. After the show, this guy walks in the room and says “Hi, I’m Marty and I work for a record label named Olympic and I’d really like to sign you guys.” We were without a deal for years, so we said yes right away [laughs]. We just wanted to put the music out. We hadn’t wrote a single new song in four years – we just rehearsed Obscura. That’s all we did.

Dead Rhetoric: You must have been so tired of the album by then.

Lemay: We were like “Fuck that thing!” Because it was just obvious shit; it wasn’t even surprising us anymore. But we didn’t want to leave it on the shelf. It wasn’t an easy market at all.

Dead Rhetoric: Wrapping up, what’s the rest of the year looking like?

Lemay: I would like to promote this record as much as we can. We have a couple of shows in September, but John is busy, which is why he couldn’t be a part of that for now. I really want to do official release shows, so maybe later in the year – people could get to know the album really well by then. I would like to – which we never did before – I want to play shows playing the entire record, and this album would be perfect for that. Let’s gather together, and it’s like a storytelling concert. Not that it’s in fashion, but I get stroked by this type of shows, like when Opeth did all of Blackwater Park – it was amazing.