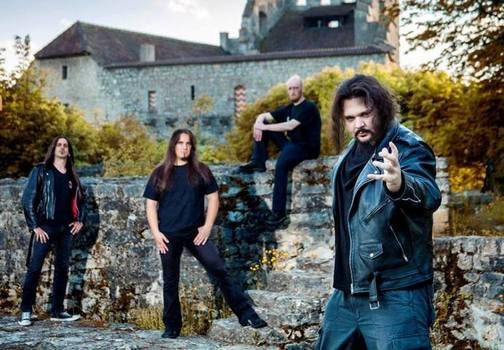 Swiss metal has a specific quality to it in all genres – elevating the impact small and large through the works of Celtic Frost to Coroner to Samael. Although Gonoreas isn’t necessarily cut from that underground cloth, their brand of power metal through the decades has that ‘it’ factor to stand toe to toe with many of their contemporaries. Scooped up recently by Spain’s Art Gates Records, their sixth full-length Minotaur features that rhythmic, electric strike necessary to elevate bodies and encourage excess sweat to leave every pore of your being.

Feeling the need to learn more about the band, we fired off a series of questions to vocalist Lenadro Pacheco – where you will discover everything about the band’s cover art, the outlook of old versus new influences that comes through on their latest album, plus future concerns regarding technology, the media, and world destruction.

Dead Rhetoric: What can you tell me about your musical background in childhood – what were some of your earliest memories surrounding music, how did you discover hard rock/heavy metal, and at what point did you decide you wanted to start performing in bands?

Leandro Pacheco: Well, my first musical memories are of my father playing some Brazilian folk songs in his car and I started to learn the lyrics and sing along with them. We had a stereo with input for a microphone at home, I remember using it as much as I could. My first contact with rock music was through my uncle who showed me the blues classics like B.B King, Muddy Waters and Eric Clapton, the same uncle showed me classical music, and I got passionate with Bach and Carl Orff at only 10 years old. When I was 12 I met a guy named Gabriel at my school, he had a band that played a huge variety of covers from punk to metal, his brother had a huge collection of cassettes, and I started to absorb everything they had, from the Ramones to Napalm Death. I started to follow the bands as much as I could, going to concerts, I was already sure in that moment that music would be the passion of my life.

Dead Rhetoric: You joined Gonoreas around 2012 – were you familiar with the band previously, as they’ve had a long history that dates back to the mid-1990’s? What attracted you to join the outfit?

Pacheco: I met them around 2010, in that time I was the guitarist of a thrash metal band called Battalion.I saw the guitarist Damir Eskic once at a metal bar in Zürich called Ebrietas around September of 2012, he was gluing some posters searching for a new singer. I said to him that I could sing. He just met me as a guitar player, he made some jokes like ‘ha ha ha ha of course you can sing! Ha ha ha come to drink some beers and we will check you out.’ What most attracted me to them at that time was the quality of the band playing live. I didn’t know their discography, I just saw them live a couple of times.

Dead Rhetoric: Minotaur is the sixth album for the band, and first with your latest record label Art Gates Records. How did you gain the interest of this label, and how do you feel the songwriting and recording sessions developed? Did you run into any obstacles, challenges, or surprises along the way?

Pacheco: Our alliance with Art Gates Records is pretty new, so there is not much to say. Until now they have been extremely professional, and we heard from friends that they are honest and do good work. We are glad to work with honest and professional people by our side. This is the third full-length album with me, besides those 2 EP’s, one compilation with remastered songs and voices re-recorded and a live album recorded in Tokyo.

The composition process occurs naturally. We are constantly in phases of creation, when we decide that it’s time to compose, most of the time we show each other our ideas, and from there most of the time comes new things. Everybody from the band has long-term experience so there’s not much difficulty for us for that in terms of obstacles or surprises.

Dead Rhetoric: You chose to work with Osmar Arroyo for the Minotaur cover – he has done a couple of pieces for the band in the past. How does the process work when it comes to conception and completion – is it a case of the band and Osmar working hand in hand, or do you give him the freedom to work on the art and accept his creative vision?

Pacheco: Osmar Arroyo is an old friend of mine, he is a very dedicated artist who lives in Jundiaí-SP, he teaches art for many decades, he has two private schools and now started his online courses. I studied in his school for about 7 years in my teenage years and learned a lot. Damir Eskic also studied arts in Switzerland, that is one of the reasons why we give so much attention on cover artwork as well as the t-shirt designs and all artistic identity for the band. Osmar Arroyo is practically one extra member of the band. We started with the cover for the first EP with me – Serpents and since this moment kept working together. The cover artwork of Minotaur is a collaboration with three different artists. Osmar Arroyo made the sculpture and scenario of the Minotaur, Davi Chaim made the pictures, and Gyula Havanszak made an additional version for the Minotaur.

Dead Rhetoric: You shot a video for “Puzzle” – what can you tell us about the concept behind this – as it seems to intertwine band performance footage with a narrative storyline? How do you feel about the visual medium in the internet age, is it as important to get this across as recordings and live performances?

Pacheco: “Puzzle” is practically a home-made videoclip, we had help with our friends of Mind Patrol, a Swiss thrash metal band. The guys work with video and lights for concerts and musicals, that’s the reason why we got these amazing lights. I wrote the lyrics for “Puzzle” and the video-clip concept. “Puzzle” is about a person being constantly abused by someone. The abused sees the abuser as an evil entity and uses magical rituals for protection. The ritual protections, the abuser and the abused are metaphors for different things. I use a lot of metaphors in my lyrics and I tend to repeat them sometimes with the same meaning.

Dead Rhetoric: Where do you see the major differences in the discography of Minotaur – especially the three albums that you’ve recorded with the band?

Pacheco: The band is in a constant state of development, Minotaur is an album without fear to experiment with new and old influences of ourselves. We get more experience with time and every album we make we get better.

Dead Rhetoric: How would you describe the attitude and outlook of Gonoreas when it comes to live performances? What have been some of your favorite shows or most memorable ones with the band?

Pacheco: Gonoreas is like a hurricane of groove and thundering solos. I am the one who leads the public to madness. Every moment is made for you to never forget a concert of ours, no matter if it’s in a small pub or in a stadium.

Dead Rhetoric: How do you view the state of the heavy metal scene today? What changes (if any) would you want to make to improve things?

Pacheco: We have huge platforms to spread our music in global proportion, there are so many bands, and so many people doing good music. I don’t believe there will ever be again a music industry like in the 70’s or 80’s with millionaire heavy metal musicians touring with their own jets, there are too many bands, everybody trying to pursue this dream. A way to improve things? People should search for bands a little deeper than what the major labels and metal magazines show to them, there are much more and better things behind the big names.

Dead Rhetoric: What would your definition of success be? Do you believe it’s changed from your youth to today?

Pacheco: My definition of success would be to transform into a reference inside of the music style I do. During my childhood I had a dream to record a live album in Japan, and this dream has already been realized.

Dead Rhetoric: What worries you most about the world that we live in today? What do you think the common people need to think about and work on to make the future a better place to live and deal with?

Pacheco: Since the beginning of human history there were always turbulent times, the difference of that time and nowadays is that the technology available to destroy the world. If everyone started to ask themselves about the news they see on tv and every kind of media, questioning if it’s really the truth, we can maybe have a chance to exist for some more centuries.

Dead Rhetoric: What types of hobbies or interests do the band members of Gonoreas have away from music that they like to pursue when they have the free time to do so?

Pacheco: I work as caregiver in a hospital in Zürich, and I give singing lessons, I have many different hobbies for example, collecting music albums, I started a small music label with my girlfriend called Grom & Lord Records, I like to go watch concerts of unconventional music, drink and enjoy life. Davis Eskic works as a guitar teacher, he collects rare guitars and he’s also a ship captain. Stefan Hösli is a professional cook and plays in another bands, Patrick Rafaniello plays football and recently became a father.

Dead Rhetoric: How do you see the rest of 2018 looking for Gonoreas in terms of promotion, live performances, etc. to support the new record? Has work begun on songwriting for the follow-up – and if so, do you think it will be similar in direction to Minotaur or will the band switch things up a bit?

Pacheco: We are gonna keep playing hard and spreading our music like a disease. We have a tour in Spain planned and for the second time a Balkan Tour. We are very happy to see our fans around the globe and enjoy great moments. I hope to play in the U.S.A soon, many American bands are a huge influence for us!!! Bang your Heads! 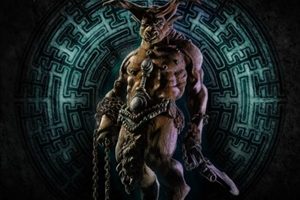