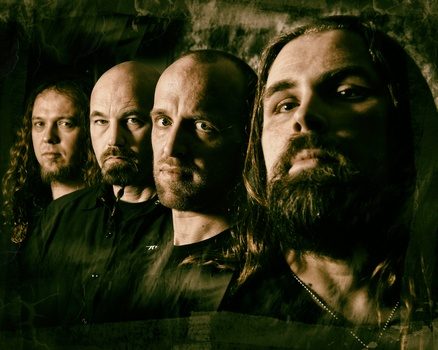 Dead Rhetoric: I know you’ve looked at having session members for a while now. Do you see Jeroen Pomper and Mike Ferguson becoming full-fledged members of the band at this point?

Sattler: Yes, they are now. We talked about it when we recorded the album. We wanted them to be steady members in the band, but in the past, when we have done recording/touring cycles, it was hard to keep the band together. We were away from home so many times, that certain people couldn’t deal with it anymore. They had a family life as well. When someone decides to quit, and you have a full touring schedule, you are forced to take someone new, without knowing if that person will be the right person in the band, with the right chemistry. It’s not about playing, it’s about being in a tour bus all the time together. Sometimes it didn’t work out that well. They were nice people, but the chemistry in the band wasn’t good. So in order to avoid that problem, we decided to work with them as session musicians to begin with. There was no need to have a fixed line-up. When I’m there, God Dethroned is there. It sounds a bit ego-centric maybe, but since I’m the main songwriter, it’s important that I’m there.

For me, it’s important that we have a band that feels like a band. So I told the guys that they were session members, and we’d see what we would do later on. I thought the new album was the right moment to ask them to be steady band members. You want to present a full, complete band on an album. It didn’t feel right to put session member next to their name in the booklet. Luckily, they also wanted to stay in the band. Our lead guitar player [Ferguson] plays in some different bands as well. I wasn’t even sure if he preferred to be a fixed member or a session member. But they said they wanted to be fixed members and that they have a great time on the road with us, and that it would feel better to be steady members in the band.

Dead Rhetoric: What do you feel that Dan Swano added to the mix on this album – do you feel he added his signature touch to it?

Sattler: Maybe not his signature…maybe he did; every producer/mixer has his own way of working. In doing so, they put their signature on the album. But we managed to keep our own identity. He didn’t change the sound of the band or anything. He just did what he does naturally, and it fit our sound very well. So yes, it sounds like a Swano production, but it sounds very much like God Dethroned at the same time. I think that’s a win-win situation. When we worked together, it was really easy because he felt the same way about the music as I did. I didn’t have to tell him anything – he just did what he felt was right, and it was right. It was exactly how I would have done it. It was a perfect cooperation.

Sattler: First of all, don’t listen too much to other bands. When I was younger….I’m still a death metal fan, don’t get me wrong, but there was a time when I got up I put on a death metal album or a black metal album, and when I went to bed I shut it off. I listened to that type of music all day long. It influences you, and it influences the way you write your songs. As you grow older, you widen your horizons a little bit, musically. I’m a big fan of David Gilmour, for example. It brings new influences and a new view on how to play melodies, for instance. Not listening to other metal or death metal bands for a while gives you a fresh look on your own riffing and songs. I feel that I can write better songs when I’m not influenced by other metal bands than when I am listening to other metal bands, for some kind of reason.

Dead Rhetoric: On the same angle, what has given God Dethroned such a lasting legacy in the metal world?

Sattler: We’ve always been different than the majority of the bands I think. We always combined death metal with some black and thrash metal influences. We also managed to stay somewhat modern. To keep it new enough to keep attracting a young audience. Some bands in the Netherlands, like Gorefest, for example. A huge band in the past, they quit for a while then they came back and they had all the fans from back in the day at the venues – still packed but with older death metal fans. When I compare that to us, every album there were new fans in the venues. There were the old fans, which is great…it’s the people you need. But it’s also good to have a new audience. For some reason, we have been appealing to a younger crowd. We don’t sound dated or something – we sound old school, without sounding old. That’s one of the things.

We also have a very loyal fanbase. We were not a band to put in a certain corner, like being an old school Stockholm sound death metal band. We’ve always been a little bit more broad. It took a little bit longer to build a bigger fanbase – we toured with bands like Marduk, Cannibal Corpse, and Immortal. Those bands were very specific and got a big fanbase quickly. For us it took longer, but Metal Blade always said it would take longer with us, but the fans would stay more loyal to us. That was true…the fans are still loyal to us, and that’s a great feeling. It means when we go out to play, there will always be people to see us.

Dead Rhetoric: Switching gears, what inspired you to go into the guitar business with Serpent King guitars?

Sattler: I wanted to do something for myself again. I had a record company back in the day, from 1998 to 2006. Then I quit because it was harder and harder to sell albums due to downloading. When I quit the band, I felt like I wanted to do something for myself. I didn’t feel like looking for a regular day job so I decided to build my own guitars. I’ve been working on it for a while…it’s not something you learn overnight. So I started doing that and developing it. I’ve been doing it since 2011 now, and we’ve built up a decent name. We build mostly custom-shop guitars. It felt like the right thing to do – stay busy with music, or a musical instrument. The ‘be my own boss’ instead of having a regular job. I tasted freedom, so it’s difficult to give that up again. I have a business partner, and we try to build guitars on the industrial level. Meaning that we work with a CNC machine so we don’t have to do everything by hand. We can work with modern equipment so to speak.

Dead Rhetoric: Do you find it rewarding in a different sense than just being a musician?

Sattler: It is rewarding – building up a company is very nice but it’s also very difficult. When we started, we were still suffering from an economic crisis so it wasn’t the best time to start a business. But I didn’t feel like waiting – if you want to wait until things are better, economically, then how long do you have to wait? So I just went for it. It was pretty hard in the early years, because there was hardly any money for me, but I managed. When you become more well-known, you get more orders and stuff like that…you can do more things to add value to the guitars. Then you see you are going in the right direction, and that is rewarding in and of itself.

Dead Rhetoric: What’s next for God Dethroned once The World Ablaze is released?

Sattler: First of all we have some album release shows. Normally we would do one in our hometown, but we are playing two shows in Germany, one in Belgium, and then two in our own country of Holland. So that will be two weekends – I’m really excited about that. We have some summer festivals lined up in Europe. After that we are looking for a good tour. There are talks about Japan now, and we want to do a European tour and maybe a US tour as well. But we need a good package – there are so many tours going on right now. If you don’t have a strong package, no one will show up on Mondays, Tuesdays, and Wednesdays. Then it’s better to just play the weekends, because they are the strongest days of the week. But if we can find a strong package, we may do some touring. It would be great, but it’s too early to tell right now. We’ve talked to our US booking agent and he wants to have us over there again, so I’m pretty confident it will work out. We’ve done 4 US tours so far and I really liked touring over there. It’s really beautiful.