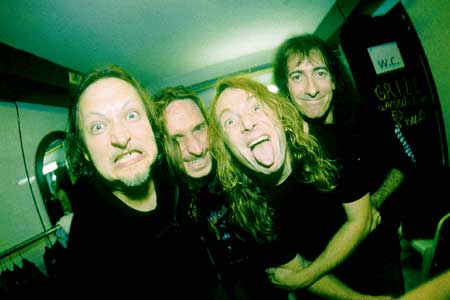 Power metal as we know it would not be the same heroic, adrenaline-pumping, fist-banging entity without the man in question, Kai Hansen. Rewind back to the mid-80’s and there was Hansen, along with guitarist Piet Sielck (now of Iron Savior, Savage Circus), bassist Markus Grosskopf and drummer Ingo Switchenburg forming the very first incarnation of Helloween under the Iron Fist banner. After replacing Sielck with guitarist Michael Weikath, Helloween solidified its lineup and record its eponymous EP, Helloween. Bristling with energy and songwriting savvy, the EP would produce cult hits such as “Victim of Fate” and Cry For Freedom.”

Indeed this was the early template for power metal: big, double-bass driven drums, fantasy-inspired lyrics, melodies galore and songs that were as catchy as fuck with Hansen’s helium-induced screams shaking the rafters to the core. Hansen abdicated the vocal spot to Michael Kiske, who took over for the now legendary Keeper of the Seven Keys saga and Helloween soon became one of the biggest names in German heavy metal, right behind The Scorpions and Accept. Perhaps the most talented lineup in power metal history, the Kiske-Hansen-Weikath-Grosskopf-Switchenburg combo would last only two albums before the wheels fell off…

Hansen’s departure from Helloween in late 1988 is still a cause for debate, but legend has it that Hansen, tired of Noise Records (Helloween’s label at the time) poor business acumen and fellow guitarist Michael Weikath’s need to control, was yearning for a change, as evidenced by Helloween’s biggest song, “I Want Out.” Thus, Hansen bolted and formed Gamma Ray with future Primal Fear singer and Judas Priest runner-up Rolf Scheepers.

Subsequent albums such as Heading For Tomorrow and Sigh No More were mildly successful, but it wasn’t until 1995 when Hansen decided to assume the vocal duties for the Land of the Free album did Gamma Ray truly gain form. Under Hansen’s guidance, Gamma Ray’s output the last ten years has been flawless, with renowned gems like Powerplant and the excellent No World Ordercarrying the band to the top of the Euro metal threshold, right alongside their peers Helloween.

The new year brings the sequel to Land of the Free, the not-so obviously titled Land of the Free Pt II. The band once again fails to disappoint, brimming with the confidence of a veteran power metal band and with the songs to boot – the intense “Into the Storm,” the anthemic “Rising Again,” the Euro pop cadence of “Empress” and the closing salvo of “Insurrection” all portray a Gamma Ray unit still firing on all cylinders, ready and willing to take on all comers to the power metal throne.

As a longtime fan of both Gamma Ray and Helloween, yours truly was clearly ecstatic to be speaking with Hansen, who proved to be both affable and forthcoming with his assertions on his place in the metal pantheon and his relationship with Helloween, which has finally been patched up.

Blistering.com: Gamma Ray usually takes 2-3 years to come out with a new album, why such the quick turnaround after Majestic?

Kai Hansen: It just came about, actually. After the Majestic tour cycle was over, we agreed that we should get to work on the next album. One of the keys was that we had to have a red line to follow – we needed songs that weren’t so diverse and far away from each other. We got to thinking, “What should these new songs be like and what do we do best?” And we all agreed that they should be positive, have cheerful melodies, a bit of naivety to them.Land of the Free was mentioned as an example and we felt that we should go and do it for fun and see where we end up.

Blistering.com: So you’ve been thinking about doing Land of the Free – II for quite some time?

Kai: Not really, it just came up more and more when we were talking about the direction for the next album. We’re at the point where we don’t need any new challenges – we are better at who we are than trying to be someone else.

Blistering.com: The first installment wasn’t a total concept album and neither is this one. Are there any parallels?

Kai: I think the most important thing with both albums was that they had this “let’s go for it!” attitude; not too thoughtful, just rock with positive power.

Blistering.com: In my estimation, there’s not a dud on the album and there’s some surprisingly strong songs from the other members, namely Dan’s “Empress” track.

Kai: True. We enjoy doing that song – it’s fun and it fit the album. There’s a lot of variety on this album, but you can tell it’s still one band and one thing, not a combination of four songwriters with different ideas.