Tuesday, 1st May 2018 By Katarina McGinn 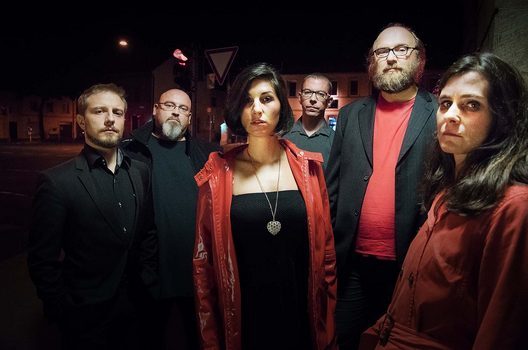 In modern times, saying that one’s music has a cinematic feel often ends up simply meaning that they use some over the top keyboard and/or orchestrations. But some bands have been setting out to change that notion. Germany’s Frequency Drift has been at this game for quite some time, often employing different sounds and vibes to create something that feels unique and apart from their progressive peers.

Such a feeling is easily absorbed from their most recent album, Letters to Maro. While traditional heaviness is something that’s been eschewed, it’s certainly just as dark as any metal fan could hope for. The use of electronic soundscapes (cleverly designed through different guitar and harp effects) lay the groundwork for an album that oozes with atmosphere, and flows like a soundtrack in nature. Something that truly feels cinematic. We reached out to multi-instrumentalist Andreas Hack and electronic harp/mellotron/synth player Nerissa Schwarz to catch us up to speed about said album – from concepts to storytelling, the use of atmosphere, and even some cinematic discussion.

Dead Rhetoric: What do you think has changed since your previous album, Last?

Nerissa Schwarz: I think Last was a very different sounding record. It was quite heavy, and quite dark in its atmosphere. It was very intense. For this record, we tried to keep that intensity but use different types of sounds. Less heavy sounds, less guitar-based sounds, and a more electronic/transparent approach. It’s quite as intense as Last, but it’s very different in its sound.

Vocally it is very different because we are very lucky to have a new singer, Irini Alexa, and I think she is a great talent when it comes to storytelling. I think we have always worked with great singers, with beautiful voices and arrangements – Irini has that too, but she is also has a very expressive voice. It’s a diverse voice where she can really tell a story and you can hear the different emotions in her vocals.

Dead Rhetoric: What do you feel that a more electronic element allows you to do?

Andreas Hack: I think the whole ‘heavy’ thing we worked very hard on Last, so we didn’t want to do the same thing on this album, and we tried something else. I do have to say that there is quite a bit of electric guitar and harp on the album, but it sounds different. It sounds more electronic because we used different effects on it. You can’t hear it as guitar or harp. It might be the same amount of guitar as before, but we used different sound processing techniques.

Nerissa Schwarz: By electronic, we don’t mean that we used synthesizers. For example, I used my electronic harp with a guitar synthesizer and different effects pedals to make it sound that way.

Andreas Hack: We tried many different guitar amplifiers this time on the harp. We have a range of sounds that were created through the guitar amplifiers that do not immediately sound like harp or guitar but we used a lot of Bit Crushing and different electronic distortions – not the usual ones. The things that sound electronic are real instruments, and this was the challenge for us this time.

Dead Rhetoric: You mentioned the harp – how do you know what you should add it in to a particular song?

Andreas Hack: I think the harp is very important and it gives a lot of opportunities and possibilities. You can use it for the bass because it’s very deep but on the other hand you can do some very keyboard-y things on it. The high, bell-like sounds on the album are very often harp. I think we take the idea of the song and then we take the harp, then we wrap the rest around it, because the harp is very, very important.

Dead Rhetoric: Could you talk to the concept behind Letters to Maro?

Nerissa Schwarz: My original idea for the album was a strange story of a commuter who sees ghost-like strangers on his way to work. The strangers look a bit familiar and instill all kinds of memories. When I thought about it visually, it reminded me of a lot of Japanese movies I’ve seen, and novels by Haruki Murakami. That was the basic idea. When Irini joined us, we didn’t have any lyrics for most of the songs, so I told her about the original idea and showed her the artwork/visuals we already had. She took the original idea and really expanded it. She read Japanese novels and watched Japanese films, she even did some research on Japanese myths and ghost stories. She ended up writing very clever and poetic lyrics that really suited the music very well. There’s all kinds of emotions and characters, and they go through all kinds of different states of emotions, which is what the music does as well.

Andreas Hack: We were very lucky to find someone in Japan who did all of the artwork for us. The pictures are actually from Tokyo. There are two videos, “Escalator” and “Electricity,” which were both done in Tokyo as well, so everything fits quite nicely.

Dead Rhetoric: Is there any significance to the red theme on the cover and the band’s promo shots?

Dead Rhetoric: Could you also discuss the videos for “Escalator” and “Electricity?”

Nerissa Schwarz: “Escalator” was one of the first lyrics that were written. They are about seeing a strange figure in the crowd that you sort of recognize but it’s a stranger. It’s a surreal kind of experience. When the videos were shot in Tokyo, I told the director some scenes that I had shot in my head – a figure that you see only from behind, standing on an escalator and surrounded by a crowd of people. He did these little clips based on those ideas and added some of his own, which were quite stunning. I think Tokyo also provided a nice backdrop for these type of visuals. It’s such a big city and you can easily film scenes in a subway station or escalator, so it fit the topic of the song very beautifully I think.

Andreas Hack: “Electricity” is interesting. It was originally the poppiest song on the album, and Irini came and wrote these lyrics about madness, which I like quite a bit. I think it’s such a happy tune, and with such dark topics, it’s nice to have them together. We gave the song to the director in Tokyo and told him what it was about, and he came up with these pictures. Some of the clues from the song, like the woman watching at her cell phone, were in the video.

Dead Rhetoric: Does the nature of the music lend itself to a visual of how you would like to see the music represented?

Nerissa Schwarz: Absolutely. We always say that our music is sort of cinematic in a way. It’s like a film plot. You have all of those different atmospheres, mood shifts, and twists and turns, along with the storytelling I mentioned earlier. If you think of a song like “Escalator,” it starts very slowly in a mellow kind of way, becomes more melancholic at the chorus, and then it becomes more and more intense and faster in the mid-section. So there are all those parts connecting like a film plot – where it changes from one setting to the next.

Dead Rhetoric: Do you feel that the band is just as influenced by soundtracks as it is any other type of music?

Nerissa Schwarz: There are a few composers of soundtracks that we really admire because they do amazing things with sound design. People like Hans Zimmer and Bear McCreary. I don’t know if you could call them direct influences but we really do admire these guys, and their attitude towards creating soundtracks that fit the pictures perfectly and use outside the box sounds.

Dead Rhetoric: With the cinematic influence, what type of film do you feel that Frequency Drift would line up with?

Dead Rhetoric: Frequency Drift has more of a unique sound to it. What do you think is the future of progressive music?

Andreas Hack: Most of the so-called progressive music is, to my ears, not very progressive, because they rehash Genesis or Yes, and most of them fail miserably because the originals are all better. I think that if you want to make music that is actually progressive, you have to try new things. I think otherwise, it’s just something that has been done before. That’s okay, but it’s not what we want to do. We want to try to create something new, something that hasn’t been done before. We change the style with each album. We don’t do the same kind of thing twice. Maybe it makes it more difficult for us, because people who know our music listen to the next album are usually like, “What have they done now? It sounds completely different.” But it’s the way we work.

Nerissa Schwarz: I actually quite like the word progressive because it means being innovative and expressive. So I don’t mind our music being called progressive, but the problem to me is when progressive becomes a genre, and people expect you to use all of those stereotypes, which happens in a lot of rock music these days.

Andreas Hack: So it might very well be that if we do another album, it might be very happy. But we don’t know yet, because we just finished this one [laughs].

Dead Rhetoric: At this point, do you feel that fans are pulled towards wondering what you will do with each new album? Do they expect a certain level of experimentation?

Andreas Hack: Given the fact that I don’t think that we have recorded two albums with the same line-up [laughs], people know what they are getting into when they listen to something [we’ve done]. Though I have to say that Irini will be the last singer that we will have. I really love her voice, and I think that when she goes, I won’t want to continue. I really think she is the perfect fit. She can do all of these different things with her voice.

Dead Rhetoric: What’s next for Frequency Drift, outside of the album release?

Nerissa Schwarz: We are doing a release gig in our hometown, which we haven’t had before. I think we’ve played more in other European countries than in Germany. But there will be some more gigs in Germany, and we are also doing a festival in the UK.

Andreas Hack: And maybe in the Netherlands. We will see what happens next. But we want to play live. We work very hard on a nice show with lots of theatrics and background projections to make it actually feel cinematic, and we want to show these to people as much as possible.