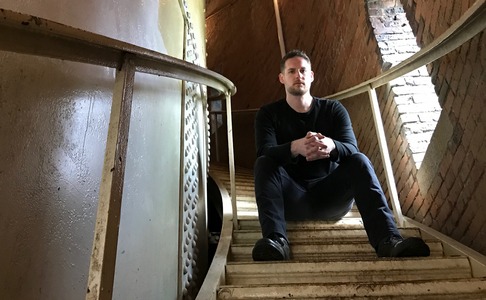 With the current musical structure at a constant change, and the marketplace allowing for bands to simply record, dump, and repeat, there’s a bounty of music available. Hence, some of it can wildly vary in quality. Keeping this mindset at hand makes a band like Fortis Amor seem all the more special. A one-man act of Ryan Duke, he has sat on ideas for songs for nearly two decades – taking care of the translation from their acoustic beginnings to their metallic finish.

Putting out two EPS prior to the release of the current self-titled full length, Duke honed his skills and confidence in order to release the album to its full potential. The album has just been released, giving us a perfect chance to ask Duke a few questions regarding the ins-and-outs of recording solo (and sitting on material for so long) and where he intends to go from here.

Dead Rhetoric: All of the songs written for this full-length were put aside while you were doing EPs. Why write more new material when you have some material already written?

Ryan Duke: That’s a great question. I did this because I wanted to have a few test runs of recording. I knew the first run of attempts wouldn’t be amazing by any means. I made a lot of mistakes and learned a lot. The first EP, Passage, was essentially a test run for recording. The songs were all experimental things I had written, but didn’t want to put on the full length. Same goes for the Seismic EP.

Dead Rhetoric: It was noted that most of the songs were originally written between 1998 and 2005. What’s it feel like to know that some tracks, almost 20 years old, are finally going to see a release?

Duke: It feels really weird and exciting. I’m so well acquainted with these songs that I feel very confident putting them out. I’m not looking at them and thinking “maybe I shouldn’t have put this one out.”

Dead Rhetoric: With these tracks specifically, how much tweaking and changing needed to be done when the album was finally recorded? It was stated that they were done originally on an acoustic guitar.

Duke: Yes, I wrote them on an acoustic so a lot had to be done to make them what they are now. The “skeleton” of the songs is there, but so much had to change to make it metal. But they are still the same songs in essence. If it’s a good song it will be a good song no matter how it’s done. This helped me to not rely on distortion or chugging riffs, but to make something that could stand without the electric guitars and all the complex drums.

Dead Rhetoric: Were there any songs that you had saved that you felt differently about now in one way or another?

Duke: Kind of, but I pretty much had the vision a long time ago as to what the album would be and I stuck with that vision.

Dead Rhetoric: There’s no easy way to classify Fortis Amor – do you attribute some of this to having the ideas for songs formulating over nearly two decades?

Duke: Not really. I aim to just make music I want to hear that I would love. I’ve never tried to copy another band or fit in anywhere. Influences will be apparent, but that’s just a natural occurrence of expose to things. You absorb them and then make your own thing out of the ideas. I do wish there was an easy way to classify it. Haha!

Dead Rhetoric: Did you ever consider turning Fortis Amor into a full-blown band, or is it the type of thing that you prefer to keep to yourself?

Duke: Yes, this is always an option. If I did, I would keep the songwriting to myself.

Dead Rhetoric: Upon an initial listen with no knowledge of Fortis Amor, you’d never guess it was a one-man show. Where there any difficulties in crafting a sound that feels big and massive when it’s coming from one source of inspiration?

Duke: None that come to mind. It’s the vision I had for the sound and when the vision is clear, getting there is just hard work. I knew what needed to be done I just had to do it.

Dead Rhetoric: What are the biggest advantages and disadvantages of doing everything yourself with music like this?

Duke: The advantage is there are no compromises needed to be made and no other people to manage. Keeping bandmates on the same page and motivated is tough and I appreciate all the bands who do it the traditional way and make it work. The disadvantage is that I only have the time I have and no one else is there to take on any of the responsibilities.

Dead Rhetoric: There’s some really impressive artwork that adorns the album and extends to the back cover – could you explain some of the nuances in it?

Duke: For sure. This was hand painted by a good friend of mine, Chris Fullam, who also did a lot of my tattoos. Since we’ve worked together on tattoos a lot we know how we each work. He understands my love for colorful and surreal art and I knew he can pull it off with the level of detail I want. He’s also done cover art for two Mouth Of The Architect (Translation Loss Records) albums; Dawning and The Violence Beneath. Both are great albums.

Getting back to the nuances. There are many and they come from the songs. Essentially the man being torn apart on the front is letting go of himself and accepting the loss that is necessary for rebirth to happen. On the back he is being pieced back together and being made new. There are lots of little things that people might not pick up on at first in the art and I’ll leave that up for speculation. Go to keep a little mystery about it, but I’m sure I will reveal more details in the future.

Dead Rhetoric: The ideas of peace and hope are conveyed with the music – why is it that we start out angry and then “grow up” so to speak?

Duke: Life can bring about a massive amount of frustrating and painful experiences and will ultimately end in death for everyone. Growing is difficult and exciting at the same time depending on how you choose to look at it. The phrase “grow up” has a negative connotation to it, but it’s what we look forward to for years and we should never stop. Growing up should be a constant in life. If we are not growing up you could say we are growing down. I’m fascinated by learning and just cannot accept that I have reached my full potential in life. Getting older should be celebrated and looked forward to, not feared or dreaded.

Dead Rhetoric: How do these ideas coincide with the band’s name?

Duke: Fortis Amor is Latin for “strong love”. Trials in life make you stronger if you let them. Love is what gives purpose to life. People “love” and are passionate about different things, but it’s there. Love that is strong is what we all want deep down inside. Without love there is apathy, meaninglessness, and death.

Dead Rhetoric: Do you feel this is the type of album that’s best enjoyed in one sitting?

Duke: Definitely. That’s how I listen to albums. I do think the songs work very well on their own, which was important to me when writing it. Some albums work as an album but the songs don’t so much on their own.

Dead Rhetoric: Is there any thought to play these songs live, or is it more of studio-only thing, as you’d have to find other members to play live?

Duke: Yes and yes. Right now I can’t confirm anything. If I do play live, I will find people of course. I’m not too worried about that at this point.

Dead Rhetoric: What plans do you have moving forward, once the album is released?

Duke: Start forming the next album immediately. I have tons of material in the bullpen waiting. I think about it almost every day and I am constantly writing more stuff. I want to get as much music out as possible, but only if it’s better than what I’ve done before and is in line with my vision for Fortis Amor. 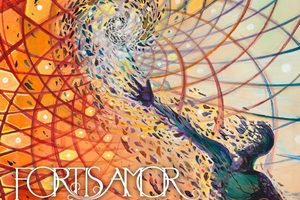