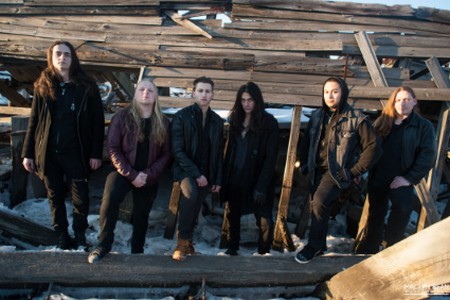 Dead Rhetoric: You touched on this already but, the element of hope. Or just that little tiny piece. Is that really the most important part, even though there’s all of the downtrodden piece?

Meyerson: Personally, just for the lyrics – I can’t speak for the emotions of other people or translate the meaning of the words or feeling itself. I don’t want to take that away from anyone, if they have a different interpretation I believe the viewer of art – their opinion and perspective is as important as the creator. Usually their interpretation of things lasts longer than the original intended message. But I think in terms of everything in the world, even just a small amount of hope can generate such much more goodness than being drown or frozen with despair. There has to be hope in order for us to continue to exist. To live and continue to do what you love, you have to have some amount of hope, regardless, otherwise there’s just non-existence if you don’t keep trying.

Dead Rhetoric: As an independent band, doing some planning and touring, how much energy does it take – knowing that there’s no one going out to get these dates set up for you?

Khutortsov: We slept in our cars last night!

Meyerson: A lot of this is like a learning experience. The more we keep doing this, the more we keep going, the better we’ll be prepared for everything. Really, it’s more about the experience about what we are doing than it being us going out and making a million fans. We are achieving a dream even on the smallest level. That’s so much about the idea of hope and the idea of the album – it can be achieved. You can achieve the dreams you set out for. We are playing in another city, it’s six hours away – it’s a small thing. Playing at the Grammercy Theater, didn’t make us famous but it was a dream for some of us. It’s living the dream and learning how to make the dream a reality that we are trying to accomplish here.

Pinkster: I book tours for bands and I’m familiar with promoters around the country. When I book a tour, and I see the feedback from the fans either before, when the tour is announced and they are super excited to see a certain band or even afterwards, a band develops new bands. Being in a band, I want to do that for Fin’Amor. We were supposed to play a two-week tour and unfortunately we had to cancel it. But we wanted to get out of New York [City] and play markets. So we played Syracuse last night, and had great feedback. It was amazing. I booked us some shows down south and I’m super excited. All the bands and the promoters I’ve booked with down south have had really good experiences and expanded their fan bases. I’m looking forward to getting down there and making new fans that will follow us for who knows how long.

Chuzhik: Really, at the end of the day, it’s about trying to get our music out there to as many people as possible. The creative process that we put into the album, and the songs that we do, and the performances, and sharing that experience with people who may not have heard/seen us before and engage with the crowd and share the times with them. We don’t want to sit in the studio and make albums. We want to experience the real live environment of what it is to be a band. I think that has a lot to do with it. If it was up to us, we would be touring all over the world. We would be touring everywhere and visit all the places and engage with our fans as much as we could and try to share our music with as many people as we can.

Pinkster: To touch on that, with the Internet and social media, we have gotten messages from someone in the Middle East or Eastern Europe, and it’s just crazy that they’ve heard of us.

Meyerson: I think a big wake up call for us – we got this message from a kid in Germany. He had heard one of our songs [“Natura”] and he was like, I have a really rough life and things really suck right now but I play your song all the time and it makes me feel better and it gives me hope. There is an element of hope in “Natura” even though a lot of it is surrounded by fear and disappointment. It was definitely a wake up call that a couple of dudes sitting in Brooklyn that come from different places and different backgrounds affected someone all the way across the world, and that’s something that want to continue to do. It’s not one scene, it’s a worldwide audience. It’s about spreading a message of hope across the ocean if we can.

Dead Rhetoric: You are going through Bandcamp for selling right?

Pinkster: Yeah. We discovered that our music is actually available via Youtube by people that decided to upload it.

Chuzhik: Which is standard practice [laughs].

Pinkster: We found it on torrent sites too. We do actually plan on getting on Spotify and iTunes.

Meyerson: That’s the thing about it being leaked. It’s not about making money off this. It’s doing exactly what we want it to do – we want people to hear it and experience it.

Pinkster: I think we are all in shock that people care enough to go out of their way to upload the music on their own time. They uploaded the entire album, which had to take for forever.

Khutortsov: Then they chopped up the tracks and individually uploaded them.

Meyerson: We were honored…

Meyerson: There was definitely a group text about that, “we made it guys!” [laughter]

Pinkster: You can actually download the album for free off our Bandcamp, but people upload it on Youtube. But people found it on Youtube and reached out to us and discovered the band, which is really cool. That’s the beauty of the Internet – it’s a double-edged sword. For a band like us, we need the exposure, but for a bigger band people would rather listen to it on Youtube. For us, we’d just rather be heard.