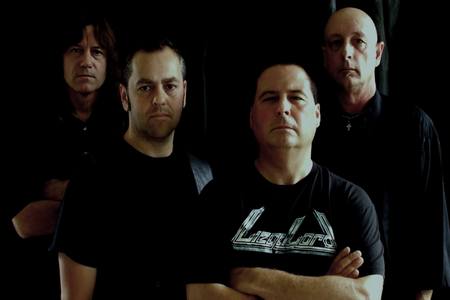 When the right factors of time, environment, and energy align, good things usually develop. Take the case of North Carolina’s Final Sign. The four-piece are all seasoned musicians who have played together through the years in a variety of bands – although never together as one until this act. Guitarist Brian Williams is best known for his blistering shred and riff skills with October 31 while vocalist Shawn Pelata at one point did some live shows with the band while King Fowley was dealing with a series of health issues. The rhythm section of bassist Howard Scott and drummer Kevin Haverlah round out the lineup – and what a potent blend of power, thrash and traditional elements you’ll hear on their debut album Hold High the Flame.

Growing up through the 1980’s scene, it’s not shocking to hear a lot of similarities from Helstar and Metal Church/Reverend to Accept, Dio, and their offspring when taking in tracks like “Burn the Temple Down”, “Madness Eternal” or the very catchy “Scaling Lies”. After taking in copious playbacks, the next logical step at Dead Rhetoric is to pry open the minds behind the music and engage a little bit more into the thought processes and feelings of two members of Final Sign. Fielding my questions recently are vocalist Shawn Pelata and guitarist Brian ‘Hellfire’ Williams – where we talk about riffs that go back to 1985, metal artwork and its appeal to overall culture, and the devotion of metal’s fan base even here in the USA.

Dead Rhetoric: Tell us what finally put the wheels into motion to start Final Sign – as all four of you have deep ties to other bands that often intersected at various points in your careers?

Shawn Pelata: Brian and I have a long history going back to 1999. He contacted me then to be a part of a new band he was putting together, which became K-Octave. We recorded one album for Hellion Records in Germany, played a few shows, then had I had to bow out. I was also part of Brian’s main band October 31 for a very brief period, playing two shows. They were mega road-dogs and I frankly could not keep up. Brian and I remained friends and always said we’d do something else. So, in 2013 Brian had some songs he had recorded with a new line-up apart from October 31 and he called me. I loved the music, wrote the lyrics, tracked the vocals, and here we are. Kevin and I played together in a band called Trampled Underfoot, so I knew Kevin was a monster drummer. Brian and Kevin go back even further, to when they played in a band called Obey Bizar together. So, we’ve all intersected at one point or another.

Brian Williams: I think the songs are just great! Then, when Shawn joined up the vocals came into place I knew it had to be heard! I am very excited about this record!

Dead Rhetoric: Hold High the Flame is the debut album – an outstanding 8-song recording that intertwines a lot of 80’s old school elements within a power, traditional, and semi-thrash template. Did you have a game plan of where you wanted to go stylistically or did things just develop naturally as the songwriting and performances flowed?

Williams: Well, some of the songs were written in different stages in time. I wrote the main riffs for “Madness Eternal” in 1985 (Crazy, right?), but never did anything with it until now. “Daring the Sun” was written during the K-Octave days around 2001. “Possessor” was written recently as a song from my solo band Hellstorm’s Hell On Earth, but I felt like it worked much better for Final Sign. “Scaling Lies” was 2008, I believe and the rest was fresh for this album. There is no game plan. Riffs are just ready when they’re ready and the right chemistry just has to be there.

Pelata: Brian just writes. He writes loads and loads of riffs and puts the music together as he feels it. As he stated, some of the riffs on this album go back many years while some were brand new just for this album. We don’t really set out to write a specific style, the music just comes out the way it comes out. If we like it, we use it…whether it’s faster, slower, heavier, not as heavy, etc. I feel like that gives us a broad spectrum of sounds as opposed to having all the songs with similar tempos, vibes, etc. There was no game plan to write specific kinds of Metal songs…just to write Metal we all like.

Dead Rhetoric: The cover art from Steven Cobb is killer – how did the collaboration work between the artist and band, and how do you feel about the final product? Do you still place a lot of stock in the visual elements when it comes to making a great first impression in heavy metal?

Pelata: First off, I want to say Steven Cobb did an amazing job! I gave him the concept and he turned it around so quickly and in such high quality, I was blown away! The dude is truly gifted and we could not be happier with our visual presentation thus far. The visual side of Metal’s presence in the world is very important in terms of the culture. Metal fans LOVE the artwork associated with their favorite bands. They put it on their walls, on their clothing, on their skin…anywhere they put it, they show off their love for the bands and show the world who they are. It truly is part of the Metal culture…anywhere you go in the world, Metal music and art and culture is a universal language. So, yeah…first impressions are important, and having visuals that represent the sound and vibe of the band are very important. Steven truly helped us achieve that.

Williams: First impressions are very important to me. Steven did a great job. The minute I saw it I loved it…end of story!

Dead Rhetoric: How does it feel to sign with a label from the same state that you reside in with Divebomb Records? What do you enjoy most about Matthew’s outlook and approach?

Pelata: First and foremost, Matt is a fan. That is so important when dealing with a label, in my opinion. If who you’re working for is a fan of the style of music they are representing, and a fan of the individual bands they are choosing to work with, it really makes all the difference. It usually ends up translating into them wanting as much for your band as you do! That is certainly the case with Matt and Divebomb Records. He takes a very caring approach to every aspect of his releases. He really cares about the sound and look of his releases. I could not be happier with Divebomb. It is nice having him be local to us we well, because it makes it easier to show up at his house and drink all his beer.

Williams: This is my first dealing with any label from my area and he has been awesome! I would absolutely do more albums with Matt!

Dead Rhetoric: The lyrics focus on a personal perspective regarding world views, but done more on an allegoric level. Tell us about some of your favorite topics you tackle on this record – and is this an easy or difficult process for you to find the right words and phrasing to go with the music smoothly?

Pelata: Yes, the lyrics are from my perspective on certain ideas or ideals and I like to blend them into allegorical scenarios. Finding the melodies and phrasing is usually fairly painless, as Brian and I have what I feel to be very strong musical chemistry. Finding words that I’m happy with is a little more difficult. Some songs come quickly, and some come very slowly and only after great effort. Haha! Opening track “Daring the Sun” deals with the subject of intense anger. Not anger at any one specific thing, but anger and rage itself. It was written in a state of intense anger several years ago, and fell right into the music Brian had written with very little tweaking. “Madness Eternal” is about getting what you wanted, only to find out it’s not what you needed. Sort of a “be careful what you wish for” idea wrapped in the story of a power-hungry king who got more than he bargained for when he went to some witches and asked for unending power. The title track, ‘Hold High the Flame’, is essentially a sort of “never let the bastards wear ya down” anthem. No matter what happens, no matter what surrounds you, hold high the flame of what you believe, what you stand for, what you love, etc. It can be applied to many different aspects of human life…never backing down. I’ll let the audience dig into the rest of the album.

Williams: Shawn is a mastermind. Anything he sings about is awesome. I would not change anything he did!

Dead Rhetoric: Given the busy touring schedule October 31 has, are there any plans for Final Sign shows, even if it’s on a local or selective basis? Where do you place the importance of live shows versus studio work in building Final Sign’s audience?

Pelata: We are absolutely going to play live! No doubt about it. We’re definitely getting out locally and regionally and hope to get onto some festival bills as well. I think live shows are very important in terms of connecting with the audience. They buy your record, and if they like it, that’s always the first question, “When are you playing live??”. The music on the album connects on one level, and when the fans can put faces and personalities to that music with a live show, it deepens the connection. So, it’s something we feel strongly about and are making plans now to get out into the world as a living, breathing band in early 2016, after the holidays. We want to be there with the other bands and the fans all in unison showing our unwavering love of and support for Heavy Metal music!

Williams: I believe in promotion! We will do local shows and I would like to do big city shows as well. WE NEED TO BE HEARD!! 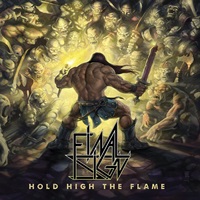