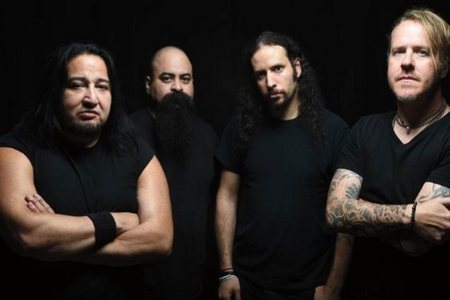 Few bands can leave a lasting mark upon the extreme metal scene the way that Fear Factory has. The band’s futurist sound that combines metal and industrial music, Burton C. Bell’s trademark clean/harsh vocal patterns, and the band’s machine gun riffing/drumwork. Setting the stage with Demanufacture, an album held in high regard by many (this scribe included), Fear Factory have continued to make a lasting impression though a solid career that has had its fair share of rollercoaster ups and downs.

The band’s latest album, Genexus, plays to the band’s strengths as well as sees them looking into the future. One of the strongest and most consistent records that they have done in a number of years, the band still has plenty to offer the heavy metal community. We were able to discuss a number of topics with frontman Burton C. Bell (the only Fear Factory member to be on every album at this point), ranging from Genexus, to older albums such as Demanufacture and Transgression, his upcoming graphic novel (based upon The Industrialist album), as well as his thoughts on The Singularity and religion.

Dead Rhetoric: You will be going to Europe to play a tour in which you are doing Demanufacture in its entirety. Any chance of the US getting one of these Demanufacture anniversary tours?

Burton C. Bell: So far promoters haven’t been interested. But we shall see.

Dead Rhetoric: Demanufacture was admittedly ahead of its time, both musically and lyrically. Are you surprised at how people still respond to the album?

Bell: It seems like it’s getting a breath of fresh air, with a new audience. New fans are discovering it and going “wow this was done in 1995 and it still sounds like an album that is being today.” I think that is what is really impressing people. The record has become timeless and it’s a fan-favorite. So yeah, I guess it does surprise me.

Dead Rhetoric: The lyrics that you written always talk about the dangers of technology. But it seems that Genexus has a bit more sympathy in this manner. Or am I reading too far into it?

Bell: Well what it is, it’s the story of man and machine becoming one – Ray Kurzweil’s theory of The Singularity. So when man and machine become one, the name for this generation will become the Genexus generation. It’s the next step of the evolutionary process of humanity. Will this generation be considered human? Will it be considered machine? Will it be oppressed? Will it be devalued as a human? These are the stories and it’s from the perspective of this generation. It’s also based upon the character Roy Batty from Blade Runner. There’s a test called the Voight-Kampff test and it is the test to see if the androids have empathy. The great thing about the story is that Ridley Scott really made shine is that the only characters that were feeling empathy for each other were the androids. The humans in the whole story could care less about each other. So empathy, yeah, it’s empathy from the perspective of the Genexus generation.

Dead Rhetoric: Obviously there are some older Fear Factory influences in Genexus. But a couple of songs, like “Expiration Date” and the bonus track, “Enhanced Reality” almost seem like there is a little bit of Ascension of the Watchers in it. Would you agree with that?

Bell: No, I wouldn’t agree with that but it’s an experiment in sound that we tried on a couple of songs and it seemed to work really well. Those two songs are actually impressing a lot of people and they are saying that “wow, these songs are great too.” So they were experiments, and that’s the thing – when you experiment, you want the experiment to enhance your sound and enhance your identity. Not to change your identity. If you change your identity, your fans are not going to recognize you. But if you do unmistakably Fear Factory songs, but there is something new and fresh about it, people will say, “Wow, that’s pretty cool.”

Dead Rhetoric: I believe I read somewhere that you really pushed your clean vocals in terms of getting a better recording out of it. Was that the case?

Bell: Well, we pushed but I feel we have clean vocals where I feel it’s necessary. That’s what I feel in these parts is a clean vocal. But we definitely worked on the clean vocals, for all the songs we came up with very different chorus lines and very different melodies and tried to come up with the best ones. To try to save my voice, I was taking vocal coaching. We brought in Drew Fulk, who is a vocal producer just to help us out. Nothing like a fresh and outside mind to come up with new ideas.

Dead Rhetoric: As you were saying, Genexus’ theme is about going towards The Singularity. At what point do you think we become too dependent on machines?

Bell: I think we already have become dependent on machines, don’t you? It’s already started and people have become accustomed to it and it’s not going to stop.

Dead Rhetoric: Again, shifting back to Demanufacture, what you were writing about then; do you feel that we have made it to some of those points as a society?

Bell: Absolutely. And that’s the thing about science fiction writers – they write about what they see at that time and they push it forward. What I was saying – it was inevitable, I could see it – it was going to happen. Now we are all of a sudden we are living in those times. Some of those things are here already or are coming into fruition.

Dead Rhetoric: A number of the Fear Factory albums have been conceptual in nature. Do you find it easier to write lyrics in that sense or does it depend upon the album?

Bell: Depends upon the album. I like to challenge myself by doing this [a concept]. It adds more to the album. Not every fan is into concepts, but there are fans that do and they find it interesting. They really engage in it and it makes them think. Some fans really dig that.

Dead Rhetoric: Another concept that has moved through the years with Fear Factory, along with the sci-fi element, is the dogma of religion. What brings you back to that topic?

Bell: There’s always some bullshit with religion going on in the world [laughs]. Wars being caused, oppression happening in the name of religion, death happening. “Church of Execution” is just a statement about every religion killing in the name of their savior and doing it in the name of religion. The complete hypocrisy of it all. I’m definitely anti-organized religion completely. Whenever I have a chance to speak about it or whenever I have a song or topic that I am thinking about it, I’ll write about it.

Dead Rhetoric: At this point, Fear Factory has been around for a long time. What would you say are some of the high points of the band’s history at this point?

Bell: I’d say the high point is that we are still around and still relevant. Twenty-five years, there’s just too much to think about [laughs]!

Dead Rhetoric: Along those same lines, what would you still like to see the band accomplish?

Bell: I think that the fact that we are still being relevant and still being able to tour and record is an accomplishment in itself. Whatever comes, I’m going to accept it [laughs].

Dead Rhetoric: In terms of your live set, the past few years there hasn’t been much from Archetype and Transgression. Do you see that changing over time?

Bell: We’ve played songs from Archetype, we play “Archetype” and “Cyberwaste.” But nothing from Transgression. Transgression is an album that people haven’t really asked about actually, ever.

Dead Rhetoric: Wow. As a long-time fan, I can say that I don’t listen to it as much as your other albums, but I still think that some of the album has a few great songs on it.

Bell: There’s a couple good tracks on it. “540,000 Degrees Fahrenheit” is a good song. “Moment of Impact” is a good song too. There’s a few others too, “New Promise” is a good song. What it is, that was an experiment right there. I was talking about experiments earlier, and it [Transgression] changed the band identity. The fans didn’t recognize it, therefore they didn’t support the album. They thought, “Who is this? We don’t recognize this.” But the name, the title of the album itself, says it all. It was a transgression. A transgression of our sound.

Dead Rhetoric: This just popped into my mind – a couple reviews and comments that I saw online had some references to Transgression in their thoughts about Genexus.

Dead Rhetoric: What can you say about the graphic novel that is going to be coming out for The Industrialist soon?

Bell: The Industrialist graphic novel is a completely independent project that I did on my own. It took a while to get it off the ground but it’s finally done. The images were created by Noel Guard, and colored and laid out by Vachel Shannon, and they a great job. They followed the story of the album and it was great. It’s only available through my website. The presale is still going on. The collector’s edition sold out, but you can still buy the graphic novel on its own. There are only 500 books made, so it’s a very limited edition. They are both going to be collector’s items. If you are a fan of graphic novels or a fan of this band, this is something special for the fans. If you want to check it out please do, at burtoncbell.com.

Dead Rhetoric: If it goes well, would you consider doing something like that again?

Bell: Absolutely. And it is going well. Like I said, the collector’s edition is sold out, and we are still selling 1-3 copies online a day. So yeah, get it while you can!

Dead Rhetoric: What else is going on once you finish up the Coal Chamber tour?

Bell: We are going to continue touring. The Coal Chamber tour ends the 22nd, and our headlining tour starts August 23. We are just going to continue touring through mid-September. In October we are going to go to Japan, and maybe a few other places. November and December we go to Europe, and then we’ll see what the next year holds. We are definitely planning to tour though the rest of this year, and hopefully through all of 2016 as well.