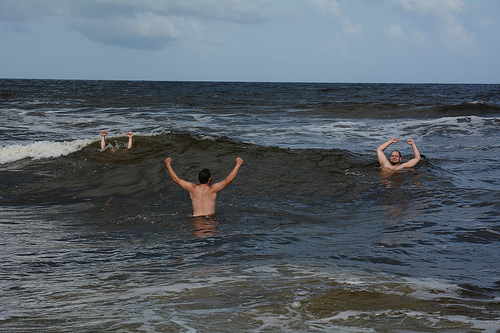 I put my hand on the doorknob, took a deep breath and opened the door. There were five people in there, a few of them curled up and visibly ill. Sweaty-towel-ketchup-man was pacing around the room and a woman was sitting on the end of the bed awkwardly awaiting relief from the after affects of drug use. When they saw me enter the room, I can only describe the look on their collective faces as sheer terror as I whizzed by to take a super loud early morning endurance piss with the door locked. I made my way back to the floor and got an hour of pained half-sleep before the alarm went off and we needed to trek back to the van by foot.

We were all annoyed, overtired and cranky as we made our way through the downtown core clinging to our personal belongings like a walk of shame after one of the most uncomfortable evenings in recent memory. However, our style while traveling is to make the best out of any situation and do our best to become positive and energized. We made our way to the ocean and gleefully splashed around in the waves, then headed to Wilmington, North Carolina, part of a region known as Cape Fear, and arrived nice and early to have a no-holds-barred BBQ in the parking lot and got our energy back up to full and got ready for our gig at Reggies. It was the promoter’s birthday party and everyone was in good spirits. We played first and spent the rest of the night playing pool, sitting at the bar enjoying dollar beers while watching Happy Gilmore muted with subtitles and checking out the local bands. We stayed with Carlos from Salvacion and his girlfriend Erin and listened to great albums, drank beer and of course slept until 2 in the afternoon. Apparently they had just put up our friends in Cauldron when they played through there a few weeks ago. Carlos and Erin were gracious enough to let us stay the following night as well and we made them a nice healthy vegetarian stir fry and went to a party in town on our day off. So nice to make new friends and have a clean place to rest after such a wild and restless week.

Time for another swim,