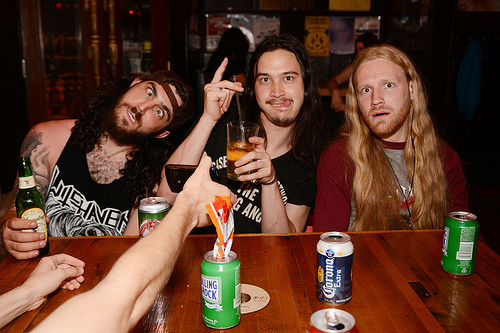 New York is a magical place. You don’t ever need to look for a wild time; it just finds you as long as you go with the flow. When the show finished and we were standing on the corner preparing to head back to Brooklyn, where we were staying, a woman named Tracy from the comedy show approached us and invited us to the bar next door to play beer pong. When we got to the door of the next bar guess what happened? The bouncer didn’t want to let us in.

This time it wasn’t my obvious and palpable one-eye-open intoxication, but rather mine and Eytan’s slovenly tour attire of cutoff sleeveless shirts. Tracy ran in and grabbed some Corona promotional T-shirts from the bar and we headed in to our own little section of the bar with a beer pong table. Tracy bought us a bunch of pitchers and seemingly endless rounds of shots. We spent the night drinking, dancing and laughing our dicks off until last call and finally we made our journey to Brooklyn to stay with our friend Nick from a band called Bröhammer.

The next morning we all awoke in a haze all at the same time. Mason had crashed on one of those really tall air mattresses that was supplied by Nick and set up for our arrival. To my complete delight I noticed that there must have been a giant hole in the side of it and mason ended up on the hard floor. We watched him wake up and realize his unfortunate predicament. He stood up immediately in his undies and mumbled angrily “Fuck this. This sucks!” and we all had an over-tired giggling fit that lasted about 15 minutes. After such a wild and magical night, the next morning it all almost seems like a dream, doesn’t it? Where did this Tracy girl come from, and why did she treat us like royalty? Did she even exist? Or is she just a ghost of New York parties past?

The next day we were playing a venue in Brooklyn called Saint Vitus bar. This is the place to be in New York. It really is a killer metal bar. When we got there the first thing we did was order our favourite drink: the Pickleback. It’s a shot of whiskey followed by a shot of Brooklyn pickle brine. Sounds nasty, but I assure you the 2 flavours complement each other beautifully and leave you with a joyous taste like you just had a nice warm Ruben sandwich covered with booze. And I haven’t been able to find them anywhere except Brooklyn.

The show was fun as stink, and it was great to see Bröhammer perform. The singer Joe has an amazingly powerful falsetto that he wields with such aggression that it’s almost like watching someone walking a tight rope, you know that it can all go wrong at any moment. But it never does. We spent a lot of time with the bass player Nick. He is such a savage, and also one of the funniest dudes I know. We spent most of today driving the streets of Brooklyn while he made us laugh till or faces hurt by saying the most ridiculous shit to pedestrians. Every time we past a gorgeous woman he would lean out of the window and bellow “Yo gurl, how’s that smell?  Yo, what dat smell like?” in the voice of Tracy Morgan.

Not even 2 weeks into this tour and I am already having the most incredible time of my life. I absolutely fell in love with New York this weekend. Now, take me to Baltimore…

Spencer “too ugly to drink, too drunk to laugh” LeVon”

Be sure to check out the remaining tour dates (here) and don’t miss the thrash party quartet in a city near you! Find the latest podcasts from Fatality streaming exclusively below!