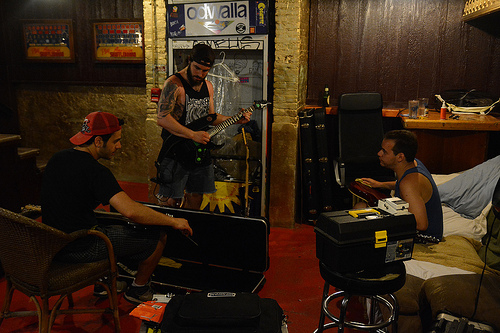 Our first gig in the states was in Portland. We played with one of my favorite bands Hessian and our new metal amigos Black Mass. We had an absolute blast and ended up staying and partying late with a dude we befriended last time we were in town named Kevin. He is an absolute lifer. A guy in his late 40’s with more energy and passion for heavy metal than anyone I have ever met. He thrilled us all night with his amazing music collection, notably a super rare tape of Van Halen from before they made their first album. A collection of demos as well as audio from Pasadena High School dances and sound checks when the VH boys were in their late teens. We loved those recordings so much that Kev gave us a copy.

The following day was Canada Day. We drove to our friend Matt Tomasz from Seax’s hideaway in a cabin on a river in a rural area of Maine. Apparently this was the river that the first priest was executed in during the Salem witch trials. When we got there it was raining, and no one was home. We let ourselves in and were greeted by 2 enormous dogs and some serenity. We spent the entire day resting, playing chess and listening to Zappa records while all of our friends back home were undoubtedly vomiting on each other in the name of the great nation of Canada. I slept for 16 hours.

The following night we performed in Worcester at a bar called Hotel Vernon. What a divine shithole that place is. It was a dive bar, but for all the right reasons. Free peanuts, a piano, pool table and $1 draft beers. The venue section of the bar looked as if it were the bowels of an old wooden sailing ship. It was a fitting, because after overzealously consuming $1 beers, everyone in the bar developed a severe case of wobbly sea legs. Also, after a full week of malnutrition, I think I may have the scurvy. I was very impressed by the great and many talents of Seax, Black Mass and Skull Hammer. AYE MATIES!