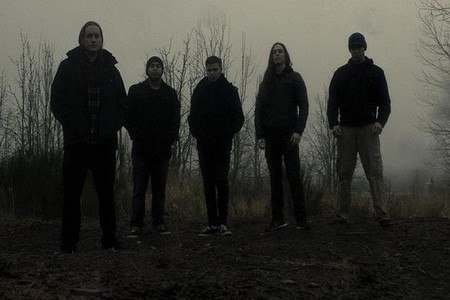 Dead Rhetoric: As a graphic designer and being involved with the artwork of the band, how important is the cohesion between the music and the artwork that is displayed?

Hofmann: I think it’s an advantage – the more stuff you can have creative control over as a band, the easier it will be for everyone. If we have an album cover or a packaging element or t-shirt, and people want it to look a certain way, it’s advantageous because we can just do that. I think the two are directly correlated. For so long, we spent time looking through covers and looking through artists and figuring out if we would license something or commission something. In most cases, if we were going to commission something, it was either insanely expensive, or the artist wasn’t feeling what we were feeling. So when we landed on the artwork [for Dreamless] we all knew relatively quickly that it would be the right fit. But as always, it needed some work to take it from the basic, organic roots to have that digital polish. When you are prepping things to be in print media, whether it’s posters or album booklets, there’s a certain level of things in the modern age that it needs, to remind kids that it is a modern album. Otherwise things look a bit too raw and doesn’t have the polish to it.

This album cover has a lot of good dynamics to it, but it took way more work than The Flesh Prevails to get it to where it was. There were a number of difficult resizing things I had to do. The perspective of the image so that it would look good on a poster, but not feel like it was squashed or shrunk to fit the album cover. That was a difficult part – making sure that no matter what I throw this on, whether it is a t-shirt, a poster, or an advertisement, it needed to look good, both artistically and from color contrast. With The Flesh Prevails, most of the work was spent on making sure that the three different art pieces looked cohesive and as one package. For Dreamless, we didn’t have all of the content. We had one cover that we needed to milk for what it was worth for the whole ad campaign for the album. We had to nail it with the cover to make sure it was dynamic enough for all these things and I think we did. We are all super stoked with how the cover came out.

The only difficult part was actually the packaging. We didn’t have all this content to work with. We needed something to fill up the lyric pages and rest of the booklet. So we developed seven or eight of these emblems that are behind the lyrics for each song, which look geometric and floral almost. They have a symmetrical, art-deco vibe. Then you have close-up shots of the artwork and the individual band promos. You have to think outside of the box – are you going to have the lyrics on a blank page or the same artwork repeated? You don’t want either of those, so you brainstorm and figure out how to make the whole packaging out of one piece of artwork.

Dead Rhetoric: I think that one of the things that Fallujah does well is have artwork that makes you kind of step back and say “wow!”

Hofmann: You want it to have the same emotional impact that the album has. People said the same thing about The Flesh Prevails. People saw the cover and they said, “Whoa, that’s saying something.” I feel like when you look at the Dreamless cover, it’s the same thing. It’s not just visually pleasing, or a sick design. It looks like it as a narrative to it.

Dead Rhetoric: There are a number of guest positions on Dreamless. Where there certain people you really wanted to work with, or how did those come about?

Hofmann: There’s always the people that we want to work with, and the people that we will end up working with. The reality is when you are a band like Fallujah, you want those super-amazing people that you have always looked up to for your entire musical career to be on your album, but the reality of making it happen are pretty slim. So you look at other contemporaries, other young people who are just killing it. We got introduced to Tori Letzler from a friend of ours and she absolutely blew us away. We flew her out here from LA – she has a lot of background in singing for film scores and she used to tour with Cirque du Soleil as a singer when she was younger. Not only did she give a good performance on the album, she has genuinely become one of our friends. When it came to harmonies and the deviations from the regular vocal lines we had for her, she was super creative and knew exactly how to execute what she needed.

Katie Thompson we found online – we actually made a post on our Facebook asking if people knew talented female vocalists to send them our way. Our inbox absolutely exploded and Katie was one of the most talented people we had. She was super proficient at using technology to record remotely from her own place and sending us auditions and stuff like that. She had a different voice than Tori had. Tori has the operatic, hazy, almost-Middle Eastern influenced vocal style, whereas Katie is more pure and direct. We used them for different purposes on the album. Lastly, on the song “Wind for Wings,” we hit up our friend Mike Semesky, who we actually met a year ago on tour. It was the first time we’ve used male clean vocals. He’s been a friend of ours for a long time, and he was super on-board to contribute – the part came out really, really great.

Dead Rhetoric: In the making-of clips online, it was mentioned that you jumped back into the studio instead of really supporting The Flesh Prevails on the road. Do you see yourselves staying on the road for a bit now that Dreamless is recorded?

Hofmann: We already have our touring planned out for the next year, at least vaguely. This is going to be an album that we hit the road hard with. There’s a certain element of realism that had to come with signing to Nuclear Blast after we put out an album. It wasn’t logical to sit out on the road and milk an album when you know you could accelerate your career and give more content to the listener by taking time off and doing another album. So for this one, we are sort of making up for lost time, but it gives us so much more content to push. It’s also great that now that we are with Nuclear Blast, we have a team of professionals who can attend to all the different dynamics that are required to make an album successful.

Dead Rhetoric: You are touring alongside The Black Dahlia Murder as they play Unhallowed from start to finish. Did that album have any impact on you?

Hofmann: 100%! It’s funny, Fallujah actually covered “Elder Misanthropy” on our second show ever. We were all huge Unhallowed fans, I think that for a lot of us it was one of the main doorways into death metal. So it should be an exciting tour.

Hofmann: It’s hard to know exactly right now. I know we are going to Europe two weeks after we get home from The Black Dahlia Murder tour. We are doing Hellfest in France, which will be sick. Then we are doing some routing shows with a few bands in between a few festivals, such as With Full Force in Germany and Tech-Fest in the UK. Right now, there’s talks about what we are doing in the US in the summer along with offers for Mexico and Australia that will happen this year. We are trying to fit a little bit of Asia in there too. We’ll do a lot of international stuff this year but we would like to do something big in the States in the summer as well.