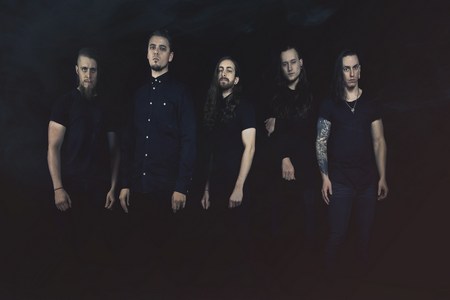 If you think of bands in the death metal genre that have been gaining more and more traction over the past few years, Fallujah has to come to mind pretty quickly. Their initial offering, The Harvest Wombs, hinted at what was to come, and then Nomadic saw them pulling towards an idea that was uniquely their own. Death metal with real feeling and atmosphere. Then came The Flesh Prevails, easily one of the most talked-about albums of 2014, which took the ideas from Nomadic and brought them to an entirely new level.

With plenty of deserved Internet buzz behind them, it wasn’t too long after The Flesh Prevails release that the band announced that they had signed with Nuclear Blast. Deciding to design the follow-up to their breakout release, 2016 brings us to Dreamless. The hotly anticipated album destined to bring Fallujah even further into the spotlight. Not resting on their laurels, the band dives further into their mixture of emotive landscapes and sonic abrasion to deliver yet another landmark release. DR was able to have a chat with vocalist Alex Hofmann, who talks about the band’s progression over time, thought that goes into the layout and pre-order bundles, how they arrived at the guest vocalists for the album, and more.

Dead Rhetoric: Was there a sense of intimidation with following up The Flesh Prevails, as well as signing to Nuclear Blast for this album?

Alex Hofmann: Yeah, I think so, naturally. You can’t have a sweet-ass breakout record and then sluff off on your follow-up. The follow-up has more to do for your career than your breakout album will in a lot of ways, because it sets the ceiling for how far things can go. I think there was pressure, but the end of the day, we still wrote the album we wanted to write, we went with the artwork we wanted, and used the people we wanted to use. So it’s not like the decisions were taken out of our hands. Whether it was a follow-up or not, it was still the album that we wanted to make. Nothing was compromised in that regard.

Dead Rhetoric: There were some people that were vocal about the sound/production of The Flesh Prevails. Did you feel you wanted to address this with Dreamless?

Hofmann: We just wanted the album to sound better [laughs]. We weren’t specifically thinking about ‘oh we can’t have it sound like The Flesh Prevails’ but we had more of a means to put the album into different hands. We still worked with Zack [Ohren] for a large portion of the record, but we sent it to a new guy to get a fresh set of ears and I think it sounds great.

Dead Rhetoric: There’s been a clear jump and progression between each of your releases. What do you feel characterizes what you wanted to try with Dreamless?

Hofmann: I think the fact that is not necessarily meant to be as fast and intense of a record. The way that I keep coming back to describing it is that it has a lot more room to breathe. I feel like the album is easy on the ears and has a spacial, cinematic quality. I don’t think Fallujah is the type of band that is going to do the same album twice. I think it would honestly be harder to write The Flesh Prevails Part II than to write something new. When we put it in front of the listener, they can make that decision for themselves. The band can talk all they want about how the next album is going to be different in this way, or how it’s characterized to them, but at the end of the day, it’s the listeners themselves that put it on and say “wow that sounds different from the last one,” so we are more interested in their opinions.

Dead Rhetoric: So does the longer length of Dreamless [compared to The Flesh Prevails] help in what you said was “having more room to breathe?”

Hofmann: Yes and no. I think the songs are perfectly timed and the album is paced properly. It doesn’t dwell too long on one thing. Naturally, you could achieve that with a longer album but you don’t want to give the listener too much to bite off. For example, 10 years ago when Red Hot Chili Peppers put out Stadium Arcadium, it was a 2CD album with 26 songs. That’s a lot of music for someone to process. You want them to feel like they have gotten a lot, but you don’t necessarily want them to have so much content that they don’t know what to do with it.

Dead Rhetoric: So important, overall, is the flow from one song to the next?

Hofmann: It’s huge. The flow and pace of everything is massive.

Dead Rhetoric: Could you go into the process of how you blend the feelings from the end of one track into the beginning of the next? Is there a way that you go about doing that?

Hofmann: The tempos and the keys are something that we consider a lot. On The Flesh Prevails, for example, where we had a couple two-part songs, the tempo and how the songs are sequenced in the album, based on the keys, in how they harmonically complement each other. You realize that you can change time signatures if you just place the sections properly. You can switch from a part that’s 180 bpm to a part that’s 120 bpm if you just rhythmically place it correctly. Or you can have two keys that mix well with one another, as long as you sequence them or maybe you have abrupt changes. It’s all how you use tempo and the keys. And attaching music theory to say “okay, these modes can be transferred or developed into other ones, or these feelings or thoughts/emotions can be developed into other ones,” if you just sequence them properly. The actual mechanics of doing it are on a song to song basis because each song presents its own type of challenge.

Dead Rhetoric: If I remember correctly, the lyrics of most of the songs on Dreamless are based upon different movies. Any chance you’ll spill the beans on one or two of them?

Hofmann: I can’t tell anyone, it’s kind of a secret. I’m intrigued to see if any of the fans can figure it out for themselves. I want to keep the mystery of it to see if kids will come up to me at shows and be like, “is this song about this one?” It’s definitely easier for some songs than others. The song “Wind for Wings,” I think is pretty obvious, as well as “Lacuna.” The reader should be able to pick those up and say, “Yeah, I think I get it.” But “Star Queen” and “Abandon” are both abstract and vague. I don’t think that people will be able to pick those two up because of the way the lyrics and phrasing happened. Sometimes giving people too literal of a cue is not necessarily artistically plausible. There’s an element of mystery with the lyrics. With The Flesh Prevails I was pretty open about what the songs were about, but this time I wanted to leave a sense of mystery to see if people can figure it out.

Dead Rhetoric: Songs like “Fidelio” and “Les Silences” continue to push the boundaries of atmosphere in regards to your music. Do you take any different approaches in songwriting terms to songs like these?

Hofmann: Those songs are almost 100% electronic. They are written on a computer. All of our songs are written with technology, but those ones come together over time. “Fidelio” is a track I started in 2013 that had been this other track – just lingering around for a while. I had been chipping away at it over time, and I didn’t really know where it would fit, in the terms of if it would be a Fallujah song or an independently released track. When it came to [Dreamless], we found a place for it to fit. The band has wanted to do something with pianos for a while, whether it was to have a live piano player or do something electronic. So it came together on its own. It wasn’t part of the regular writing process. It was this other track, similar to the way “Alone With You” was with The Flesh Prevails. We wanted to have an atmospheric track that was in a different context than a literal band (singer/drummer/guitarist/bassist) would play.

Dead Rhetoric: There’s a lot of different and creative approaches to pre-ordering the album in regards to the bundles. How do you come up with the ideas for those?

Hofmann: Mainly, it’s me and our merch representative, Karim, over at IndieMerchStore. He does this for a living. We did the same thing with all of our other albums. We wanted to have something that’s more than a simple shirt and cd combo. When I was a kid, bundles were pretty basic. You expected to get a shirt and cd for 20 bucks. That business model kind of faded out, so now you need to have more novelty items to entice people to buy your shit. We were thinking about common themes among Fallujah fans. People were always asking for tab books, so we thought we’d do something with guitar playing where they get that and guitar picks too. Then we have a lot of drinkers and borderline alcoholics who like metal, so we did a drinking package – a pint glass, a bottle opener, and we thought up some coasters. We also talked about doing a smokers package for all the stoners, but it turns out that there are a lot of legal grey areas, especially with international orders, when it comes to those. At least through a major outlet like IndieMerchStore. We thought of some other ones but didn’t want to over-complicate the whole thing.