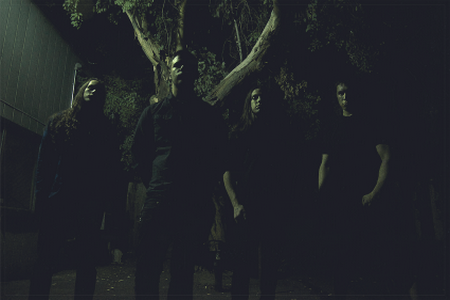 Some say that innovation in heavy metal music is dead. We feel that every possibility has been explored and that we are left with a sea of sound-alike copycats (we’re looking at you “Old School Swedish Death Metal Band #8990”). But just when you begin to feel that hope is lost, comes a new up-and-comer like Fallujah. Slowly shifting their sound from their debut, The Harvest Wombs, to the loaded-with-potential Nomadic EP, their recently released sophomore album, The Flesh Prevails is a breath of fresh air.

Taking the death metal mechanic and infusing it with lush and euphoric atmosphere may not seem like that big of a deal on paper, but Fallujah have pulled death metal into new and exciting directions with The Flesh Prevails. So impressed with the bands latest effort were we at DR that we sent frontman Alex Hofmann some questions before the band departed on their Summer Slaughter tour. Read on to find out your fill of The Flesh Prevails as well as some small glimpses into the band’s possible future.

Dead Rhetoric: After Nomadic, many were curious as to where you would head with a new album. Did you feel any pressure to deliver something that would match public expectations?

Alex Hofmann: To a certain extent yes, but in the grand scheme of things it didn’t really effect the outcome. We had the confidence in ourselves to make a crushing album and didn’t really compromise anything for time or expectations.

Dead Rhetoric: Death metal (and its fans) present as pretty fickle. No one wants something that sounds the same, yet are resistant to change when it does appear. How do you evolve as a band without abandoning your roots?

Hofmann: A truer statement was never said. You don’t really have to worry about abandoning your roots as much as abandoning the style that your fanbase expects. You have to build a foundation with the earlier releases in order to have more freedom later on. Some bands do this well, which allows them to get away with it while others would fall victim to ridicule.

Dead Rhetoric: The cover art seems to portray a struggle between beauty and beast (or even light and dark). Going along with the title, The Flesh Prevails, do you feel this concept comes across in the album?

Hofmann: The artwork perfectly exemplifies the themes of the album, with a promising and hopeful elegant woman being torn down by a dark decaying old man that is ultimately still fused to her in one way. By that I don’t mean a literal woman or literal man, but moreso the contrast between dark/light, hope/failure, progress/devolution.

Dead Rhetoric: Is there a track on The Flesh Prevails that you are particularly proud of?

Hofmann: This will depend on whom you ask in the band. “Levitation” is my personal favorite as it’s the most emotional and powerful track on the record. I also really enjoy “Alone With You,” which I produced.

Dead Rhetoric: With Nomadic, you were quite open about leaving the “stereotypical” metal lyrics behind. What are some of the themes of The Flesh Prevails?

Hofmann: The themes of The Flesh Prevails build on what Nomadic laid out for sure. Topics of addiction, sexual empowerment, suicide, abandonment. The title of the album though implies an overcoming of these kinds of strife; like facing death and not allowing it to claim you.

Dead Rhetoric: How did you get Christian Muenzner to appear on the album?

Hofmann: Scott [Carstairs] has known Christian for years and is a former student of Christian. He wanted to be a part of the album and his solo came out great.

Dead Rhetoric: There are so many diverse influences apparent on The Flesh Prevails. How do you take two songs like “Levitation” and “Alone With You” and place them side-by-side without creating a jarring transition?

Hofmann: This is hard to explain, as the flow of the album and our transitions are an extensive process. We try to keep the moods and vibes the same from the ending of the previous track and into the beginning of the next, especially in live settings.

Dead Rhetoric: The later half of The Flesh Prevails sees the vocals becoming more scarce. Was it a goal to have the vocals work more as a piece of the framework rather than steering the entire ship, so to speak?

Hofmann: The vocals provide the context and themes for the music to operate in. If vocals are not necessary I don’t feel the need to assert myself. The idea for two completely different instrumentals on The Harvest Wombs was actually my idea. I don’t look at vocals in a front man or commanding sense, unless we are talking about a live setting where obviously I do take that commanding role.

Dead Rhetoric: Do you see the band heading further into this direction [less vocals] in the future?

Hofmann: It depends, I know we want to include more female clean vocals in the future, and take things in a more melodic direction. How it will be executed is hard to know at this point.

Dead Rhetoric: The Flesh Prevails seems to be a culmination of what you have been striving towards since the beginning. Where do you go from here, musically speaking?

Hofmann: At this point we aren’t really thinking about the next album quite yet, but we all know that things will continue to harness elegance and emotion or brutality and technicality.

Dead Rhetoric: You’ll be heading out on the Summer Slaughter soon. What are you looking forward to the most about this tour?

Hofmann: Mainly making new fans and promoting the new album. Many of these kids coming out are there with totally open minds and SS is a perfect platform to promote a new album while giving your current fanbase their fix.

Dead Rhetoric: Do you have any touring plans after Summer Slaughter ends? What’s next for the band in 2014?

Hofmann: We’re going to Europe in winter with Dying Fetus and Goatwhore, as well as a little west coast headliner in between. The beginning of next year is looking pretty good, but I can’t say much haha.