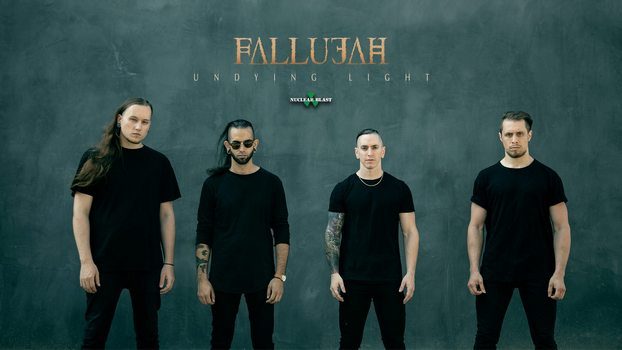 Dead Rhetoric: One thing I’ve always liked about the band, and you can hear it on this album too, is that there is a flow to an album. When you were talking about picking certain songs to make the music go a certain way, it always feels like there are individual songs, but there is also an order to it in the way that it is moving from one way to the next.

Carstairs: For sure. For us, each song should have its own unique vibe to it. There’s a soul to each song. But there should also be an overarching theme to the whole album. I think, with this album especially, we were going a little more dark, depressive, and sad yet hopeful in a sense. We just wanted to explore that in different ways. The songs we put out – I think we were being risky with the singles, but if you have heard the album, they all have this sadness to them, or continuing forward even if it means death.

There’s a number of concepts on there but they explore it in different ways. “Hollow” is a heavy and open-sounding track. “Dopamine” would be similar to that. If you listen to songs like “Glass House” or “Sanctuary,” they are more of that traditional, riff-y, fast and intense – but they all have that dark, melancholic feel. The vocals just wrap it up perfectly for me. Before, it would be Alex’s vocals and then take an element from a different singer to do something else. Antonio is incredibly talented – he does the singing, pitch screams, and his scream voice. What I love so much about it, is that if he’s doing the tonal screams, the singing, or his own thing – he is his own character.

I know some people hear it and they immediately want to compare it to some other thing that they’ve heard, but to me, I want someone who is unique to themselves and brought something to the band. Especially when you are trying things like tonal screaming – you are seeing bands that are really brutal but are dying for some melody. They try it out, like Cattle Decapitation. He did some really sick stuff when he puts melody in his screams. Then you’ve got stuff like Gojira and Devin Townsend. Devin has lots of singing but he does those pitch screams, and when he does it, it doesn’t sound like any of those bands. If I did it, I would probably sound like those bands.

Every part of him sounded perfect for the album for me. The fact that this isn’t some kid from the middle of California who made an amazing audition video, Antonio lives and breathes music. He has lived and breathed it with less rewards than most people. He already has two albums, and another one coming out. These are albums that he has written and recorded himself. Some of them were actually with our bassist Rob [Morey].

Dead Rhetoric: Is there a new Underling album coming out then?

Carstairs: Yeah, there will be. It’s been done for a minute actually. So we wanted someone who was as passionate as us. With Rob, Andrew, and I, this is what we want. The band is really important to us. I knew that when Antonio joined the band, I wouldn’t have to worry about losing him in a year or two. This guy is going to do it with us until the end. He’s always had that. It was confirmed with this tour, and helping write this album.

Everyone is going to gripe or be positive about his vocals, but I don’t think I’d be as happy if I didn’t find a guy like him to be on it. He really gave it his all. You can’t expect that from a lot of people. Especially when you are getting older. People have girlfriends, jobs, kids – you are getting to an age when you can’t give everything you have to a band. It’s cool – with members leaving, we really put everything we had into this. Whatever positive or negative I get from the album, I don’t have any regrets. This is exactly how I wanted it to sound. It’s easy to be confident in that – whatever people say, they are going to have to deal with it. It’s funny to hear people freaking out and saying, “Whatever Alex and Brian wrote, they took with them,” and not understanding that I wrote all the albums. It’s the same unit that has been writing, we just decided to really go for it.

Dead Rhetoric: Is it strange for you to be considered a reference point for much of the atmospheric death metal that is popping up nowadays?

Carstairs: I guess – that was brought up a lot in the interviews on the Obscura tour. I guess you just get caught up in working in your own band and making sure you are unique to yourself. You are more meta – what is Fallujah and where is the path you should go? People have been bringing that up, and bringing up other bands – some of which are clearly taking influence, like straight-up taking elements that we use. I don’t know how I feel about it. It’s cool, but I think I said to someone else – if you are really taking influence from us, you would be your own thing. I know what it’s like – with our first album, you are young so you can’t help but be influenced.

It’s flattering and inspiring that these people felt so connected to the sound and it came out in their sound. I’ve been teaching guitar for about 10 years now, and I don’t keep anything from my students. A lot of my students are now in bands. I will show them exactly how I write and my methods. Some of them will write and put it into their music and do something unique with it, and I love to see it. Sometimes people literally just take my formula and write music with it. That’s fine I guess, but it’s always cool to hear someone make something new – you can hear where they were inspired by but did something new. But for those bands that are less artistically taking the elements, I think that if they were truly influenced by us, they wouldn’t do that [laughs].

It’s all about being true to yourself: who you are and the skills you have at that time. We don’t want to shoot past what we are. You don’t want to put out an image of yourself that isn’t real. That is pretty common now with social media. You can spend months in the studio playing at half-speed, or one measure at a time, and when you see them live, they sound like shit or don’t know what they are doing. Or doesn’t sound good because it was just put together on Guitar Pro or something. I would hope that the real honest stuff you can hear. Sometimes the not so honest stuff gets big and popular but that’s the way it goes. But it is interesting – there’s a few magazines talking [about Fallujah’s influence]. It’s like chill out – we aren’t influencing that many bands, but it’s cool to hear. I think that just happens when bands be themselves. It’s inspiring, and it makes me want to keep making music.

Dead Rhetoric: Given Fallujah’s sound, do you feel that emotions other than anger are just as important for death metal bands to tap into?

Carstairs: Most definitely. Depends how death metal you want to talk? Are we talking Dying Fetus, Death, or Decrepit Birth? Decrepit Birth to me is about magical wizard shit, like stoner – a lot of tech death bands tapped into that YouTube conspiracy feeling you get, when you are trying to work out how the world works. Or a band like Cynic – their lyrical content is some next level shit. Clearly those dudes took some DMT or acid and are trying to put it down on paper. So yeah, I definitely think metal is just a platform for expression. We’ve seen so many amazing bands come out of metal. It reminds me of jazz or fusion. It reminds me of a platform, but within that platform you see so many unique sounds. It’s like a spectrum.

Going from Obscura to Decapitated to Cynic or Deeds of Flesh – I’m trying to keep it real [death] metal, I could go into prog. They are all delving into something that is aggressive, loud, and fast, but some are more emotional or apocalyptic. There’s a huge range of vibes you can put out. We understand that we are a metal band and it has to suck you in with that intensity, but we want to explore vibes that may have been explored but we are hoping they are more new to explore. More of that Tool/Smashing Pumpkins/Deftones – those bands have melancholic feels but explore them in unique ways that are true to themselves. Gojira – that shit is amazing.

Dead Rhetoric: You are right – especially with the melancholic stuff. You can stay aggressive but still add that piece that brings in sorrow as well.

Carstairs: As far as mainstream music goes, it kind of lacks that masculine anger that you hear a lot in metal. No doubt it is happening in music – there’s plenty of aggressive stuff even in mainstream music, but it’s not as big as it used to be. That raw emotion that, I don’t want to say masculine, but that ignorant raw power that you got with Nirvana or Soundgarden. I’m thinking of a lot of grunge bands right now for some reason. But that coolness and heaviness – these days it’s more self-deprecating.

Dead Rhetoric: What plans do you have once Undying Light is released?

Carstairs: We definitely want to take the album and tour the world with it. Go where we have before but also new places. We want to go back to Australia, hit Europe again now that we can play Undying Light more fully, hit US and Canada, and get to Asia and Japan. Hopefully South America too. Our main goal is to get this out and tour as far as we can. We put everything we could into writing and hitting this new era, so we really want to hit the ground running and do it has hard as we can. That’s all you can do I guess.