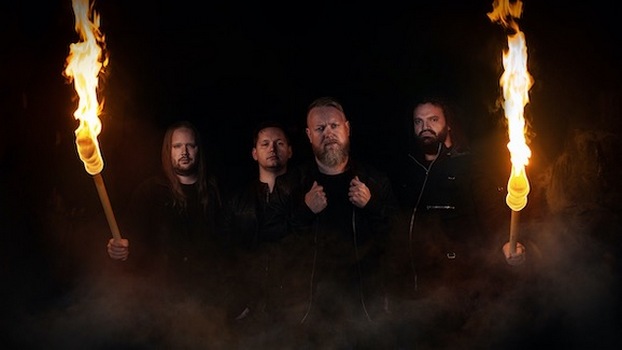 Eyes Wide Open have been playing energetic and emotional Swedish metal (melodic death/metalcore/take your pick) for over 10 years to date.  Their latest release, Through Life and Death, sees them poised to take the next steps towards making a bigger splash in the modern metal community, courtesy of some proper label backing with Arising Empire.  We chatted with vocalist Erik Engstrand and guitarist Kristofer Strandberg to get all of the info surrounding their latest effort, their continued evolution, the importance of independent bands and providing the ‘whole package,’ and more!

Dead Rhetoric: What stands out the most about Through Life and Death to you?

Erik Engstrand: I think it’s really the personal connection to the songs.  We have been diving really deeply into the lyrics.  Some of these songs have a really close connection to reality, with the loss of a friend for example.  Also, I think we are really proud of this album because we did everything ourselves.  It was recorded in our own studio.  We recorded it, mixed it, and mastered it.  We even did our music videos ourselves.  We are kind of independent that way.

Dead Rhetoric: You have put out 4 videos at this point leading up to the album.  What’s the feedback been like?

Engstrand: I think it’s been great!  Arising Empire has helped us a lot with the release, and I think we have a decent amount of great reviews.  People are liking what they are seeing and hearing.  I’m pleased.

Dead Rhetoric: Is there a particular video that you shot that you like the most?

Kristofer Strandberg: I think every song is a bit special, but personally, I think “Burn ‘Em” is the one that sticks out the most because of how we made the video, and how it came out story-wise.

Engstrand: For me, I really enjoyed “End of Days.”  I think “Devastation” was the most fun in the shooting because of the fire and all that.  It was really cool.  We were at a fire department where they have containers that are used for firemen to test out putting fires out on a roof.  It was really intense and cool that way.  But story-wise, “End of Days” is a very cool video.

Strandberg: The funny thing about “End of Days” is that that we poured a lot of sand and water over Erik [laughter].

Engstrand: It was a struggle but it was worth it [laughs].

Dead Rhetoric: As you were saying before, there’s some personal touches to the lyrics.  How do you wrap them up so that they are relatable to a wide audience?

Engstrand: We usually try to write in metaphors, to help broaden the perspective a bit.  I think it gives more to the song to write it that way.  You can interpret in the way that you feel about it.  But I think the subjects were are touching on with this album is something that people can really relate to: the life and death of others – those spots hit for everyone.  Everyone has to go through life in some way – meaning that they will be touched by death, and have their own struggles and demons.

Dead Rhetoric: There’s a distinct Swedish melodeath inspiration to your sound.  Are there any bands that are near and dear to you in the scene?

Engstrand: I think In Flames was the band that brought us together.

Strandberg: That was the connection point that brought us together ten years ago.

Engstrand: But I think that since then, we have so many other inspirational bands around us.  We keep getting new influences from all over the spectrum.  The Swedish melodic death metal scene, with In Flames, At the Gates, Soilwork, and Dark Tranquillity, all of those are big influences for Eyes Wide Open.

Dead Rhetoric: Given the inspiration, what’s important to you about what Eyes Wide Open does differently to avoid being labeled as ‘another Swedish melodic metal band?’  That’s one thing that I have enjoyed with the sound.  It’s hard to really label it unless you want to be generic and just say ‘metal’ or ‘melodic.’

Strandberg: We have had that problem for ten years now.  But I think as Erik said, we have so many different influences from all the metal spectrums and other genres.  I guess this is the combined sound of what we love doing.

Engstrand: It’s kind of hard to put us in a subgenre.  Most people say Swedish melodic death metal or metalcore.  It’s really hard when people ask what we play, and we can’t really define one genre so that people understand how we sound.  It’s the personal touches – we want to do all of this, and don’t want to be really generic in one genre.  We want to be diverse and not have every single track be the same.  We try to mix it up a bit.

Dead Rhetoric: Is there a particular moment that stands out to you as a great accomplishment you have achieved in the band?

Engstrand: I think this was the first time that we actually wanted to go with a label.  It feels like a new beginning for us.  We have been independent for so long and didn’t take the step to give our songs to a label.

Strandberg: We tried with a single before, but that wasn’t really our thing.

Engstrand: We went back to being independent and rejected a lot of offers.  It finally feels like we found the right label.  We have found ourselves to fit with their roster and we have a great team working with us.  This is a new stepping stone for us.

Dead Rhetoric: Working independently for so long, do you feel that there was a bit of a glass ceiling, without anyone else to help push things forward?

Engstrand: I think so, yeah.  We have been doing this for 10 years so of course there is a glass ceiling.  Much of this is done by networking.  Without the right connections, you don’t get anywhere.  So many doors are opening for us now.  I think it was the right time for us to take the step into a label and get a team working with us to break the glass ceiling.

Dead Rhetoric: How do you feel that Eyes Wide Open has evolved over time?

Strandberg: I think if you listen to all of the albums and the first EP, that we have evolved a lot with each release.  I think our last album, The Upside Down, really was a stepping stone and it cemented our sound.  Through Life and Death feels like an extension of that album.

Engstrand: I think so too.  I think we had to have an evolution when our former vocalist Patrick left the band.  I stepped up and did the vocals instead of doing rhythm guitar.  It really changed everything for us: writing music in the studio, touring, it has all been easier for us.  Songwriting has been way easier in the last five years.

Strandberg: Since we got our studio in 2017, it also changed the music and how we could evolve our sound.  It’s a lot easier than before.  You keep learning all the time.  Hopefully it gets better and better.

Engstrand: Hopefully we continue to evolve from here [laughs].

Dead Rhetoric: You mentioned learning.  What is a big takeaway that you have gotten from being in a band?

Engstrand: All the way from releasing stuff to touring, there is a lot to learn.  When I speak with younger bands and people who want to hear what I have to say about that stuff, I tell them to invest in your product.  Don’t just record it at home and just release it on the fly.  There are demos with lousy artwork, bad audio, and bad videos.  People don’t get that.  If the artwork is really bad, people aren’t going to listen to the album.  Try to invest and package your product to be high end, it will make things fly much easier.

Dead Rhetoric: I spend a lot of time on Bandcamp, and haven’t checked out some bands because the art is so horrible.  When I see that, I think that if they didn’t invest on the artwork they probably didn’t invest in the album.

Engstrand: I have seen that a lot, where local bands here in Sweden have asked for my ideas and I think that is the best time I can give them.  Invest the time and money into the stuff.  The music is still fresh a year from now.  But if it is packaged better, you will succeed easier.

Strandberg: It’s fine if you just want to release music and are just doing it for fun.  But if you are expecting something more, and want to go somewhere in the music industry, take the time and tour as well.

Dead Rhetoric: Who would be your ideal tour partners, given the option, since things are beginning to open up?

Engstrand: We would love to do a US tour with Killswitch Engage or Trivium.  That would be insanely good!  Killswitch, Trivium, and Eyes Wide Open – sounds like a plan!

Dead Rhetoric: What do you guys do for fun outside of the band?

Engstrand: I do a lot of film-making and Kristofer has been producing since we opened up the studio.

Strandberg: Also video games for you and Jesper.  A lot of lyrics are inspired by video games.  It’s pretty cool that we started back in 2010 and now it has become a day job.  It’s nice that it is possible to do that.

Engstrand: There are a bunch of tours.  Nothing that we have announced yet, but we are going to play a few shows with Imminence.  There are some other ones being planned right now.  Hopefully it will be a good touring year going around the world. But there is a lot more to be planned. 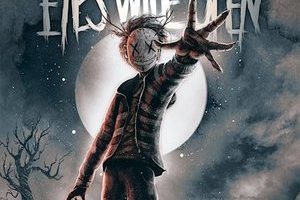