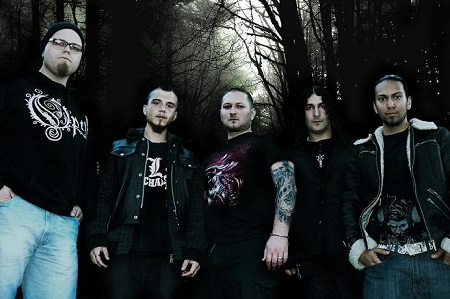 Workaholics and masters of misery, Eye of Solitude are pummeling the world with their fantastic new release Sui Caedere. Well received across the metal world, its oppressive aesthetics leave little to the imagination that isn’t crushed beyond dust or strangled outright. But life is not all heartache and misanthropic popsicles as it turns out, as band members Tristan and Indee took the time to engage us with some very warm conversation.

Blistering.com: What has the response to Sui Caedere been like across the world? Are you happy with the response?

Tristan: We weren’t sure what to expect from the reviews because the album is so different to our debut full-length, The Ghost. But when we saw that Scream gave us 5/6, Destructive Music 9.5/10 and Metal Kaoz gave us 9/10, it was more than we could have hoped for. We felt so proud that something we worked on for so long, had be met with such a great reception.
Indee: First of all thank you! Well we weren’t quite sure what to expect, I knew that it would definitely solidify our sound to our listeners so they would understand what to expect. It’s certainly has a larger world reach than I expected, going out to people all across this world for that I am greatly appreciative.

Blistering.com: “Sui Caedere” is unquestionably a doom record, but with a fair number of up tempo or even hyper speed moments. What drives that variability?

Tristan: The music is based on emotion and emotion is dynamic and fluid. Therefore, the music should represent that. Misery isn’t always slow and droning, sometimes you can have a sense of anger or panic at the same time. They are at the other, more manic, end of the scale and the sound emulates that.
Indee: Well being labeled was not something we have not really done ourselves. We know there is certainly doom and death metal within the origin, but anything else usually an outside comment. Of course we each gather our initial concepts on how to approach writing this music, but the main contribution is our experiences and emotions. These factors can take the movements in any direction and this is an amazing thing that it shows within the music.

Blistering.com: That being said, it’s certainly not a happy sounding record. What kind of toll does it take on a person to produce this kind of music? What are the predominant influences?

Tristan: It’s exhausting and cathartic in equal measure. Both Daniel and I use our own personal thoughts and experiences when creating music. “Awoken By Crows” was part of a dream I had and the sound was what I would hear in my head when my mind was in that type of state. Both he and I were going through particularly difficult periods when creating the album and tried to use that to our advantage.
Indee: Personally my approach for Eye of Solitude is not to think of particular chords or progression, instead I concentrate on an emotive concept and how I can represent that with my note choices and lead lines. With the orchestral elements I choose to stray away from a typical symphonic sound but rather to opt for a grander sound, somewhat closer to a film score. I have never really listened to much doom music myself and I feel this helped me to keep our sound quite original with enough scope for new areas explore.

Blistering.com: Of particular note is the absolutely world shaking vocals of Daniel Neagoe, so we have to ask, is there some kind of gnarly secret behind them?

Indee: Yes there is indeed, when I record him I lock him up in a hyperbaric chamber feeding him only pure oxygen, corn flakes and honey and glycerin throat medicine!

Blistering.com: Diving into some background on the band, you’re still relatively new given the listed foundation date. How’d the band come together and how did you decide this was the kind of music you wanted to make?

Pedro: As a band, we’ve been more then members/colleagues, we treat each other as family, each one of us besides the hard work towards the band, we keep a good relation, we’ve met in different circumstances which to our surprise, “clicked” with different influences. Regarding the type of music we wanted to make, we all have some chemistry that bind us with this project, expressing our deepest feelings and materializing those emotions into music.
Indee: I was asked to join the band after The Ghost album was released and at that time there were certain changes happening within the group, so when I arrived the writing team was just myself and Daniel. At the time the band was only about a year old, people knew that it was in existence and what the initial sound was. It was just by pure chance that after one week that we wrote what became “Suffocating Silence” (one of three exclusive tracks off theAwoken By Crows digital EP) and that shaped the approach of the EP that was born of those sessions. We then decided to continue in that vein but to progress into our next movement. We always knew that we would like to concept based and to provide a journey for the listener.

Blistering.com: This is your second album (and third release) in two years. This is not common with most bands, but it’s almost unheard of in doom circles. Care to elaborate on the explosive production?

Indee: Well the unreleased promo EP (which is now part of the Awoken By Crows digital EP) was really an introduction to a new band in essence as the lineup and sound had changed. As we had written more material over the promo EP sessions we knew that the next logical offering was to produce an album. By the time of the second album, Sui Caedere the band had an entirely new line up to The Ghost and in some ways we regard that as our first full band album. So those matters contribute to the bursts of releases. It also doesn’t help that we are always writing more new material, inspiration is a cruel mistress!

Blistering.com: The artwork in particular stood out (for me) due to its vibrant use of colour, something also unusual for bands in this style. Is it tied to a concept that runs across the album or was it spur of the moment? How did you decide on it?

Indee: Original concepts were discussed between Daniel and I, but Remedy Art really added a fresh new spin to the ideas in our heads. There certainly is a tie into the album and concepts within, but we’ll leave you to have a listen and gather your thoughts on that!

Blistering.com: Future plans? Working on new songs or preparing for a series of tours? Any chancwe on catching you here in the states?

Indee: At the moment we are in the process of perfecting our live show for a few festival dates we are playing and establishing possible tour dates with some of our peers. There are always new songs and material floating in the Eye of Solitude ether and maybe even chances of collaborations and a cover! At the moment there are no plans to play the states, but we would love the opportunity to do so.

Blistering.com: That about wraps it up, do you have any words of wisdom for our readers? Thanks!

Tristan: It’s easier said than done, but don’t let fear stand in the way of your opportunities. Whatever you’re afraid of losing won’t be worth keeping if you don’t live your life. On a more serious note, a wise man once said to me, “Ra-ra-ree, kick ’em in the knee. Ra-ra-runt… Kick ’em in the other knee.”
Indee: A massive thank you to anyone who has shown support for Eye of Solitude in which ever form, I can say that we all really appreciate it. Come and talk to us online and share your thoughts and opinions. If you have not yet listened to the EP or albums, they are streaming in their entirety at our label’sBandCamp, so sit down and turn up the volume and enjoy the journey!