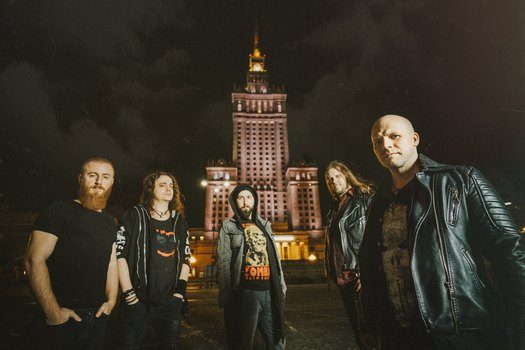 Dead Rhetoric: Discuss the newest members Riku and Grzegorz and what they bring to the table? How is it working with a Finnish singer being that the rest of the members reside in Poland?

Sikora: I’ve known Grzegorz since before we started Exlibris. He was actually the first real drummer I ever played with. He’s an extremely talented musician, not just great with drums but also with guitar and the piano. I’ve always hoped to do some kind of project with him but the timing was never right until now. I guess having a drummer that skilled let us fully unleash our creativity in the songwriting. It also let us use a more organic drum sound on the album, compared to the previous ones.

The story with Riku started with an opportunity to play a big festival when we didn’t have a lead singer. We’ve been trying to find a suitable in Poland for a while already but without much luck, so a friend of ours who knew about the festival thing decided to take matters in his own hands and contacted a singer he saw on YouTube. He seemed to like the band a lot so we began talking about doing a couple festival dates with him as a guest singer. We didn’t think it could become anything more than that because of the distance. Sure, we all know bands that make the long-distance thing work but we weren’t really making any money off the music so we didn’t really consider that. What we did consider was recording a single new song before the festivals to let the world know we were far from over. That went so well that we decided to ask Riku to become a full-time member even before we actually met in person. The distance proved not to be a big deal and we’re actually touring more and get more work done than we used to.

Dead Rhetoric: Where do you see the role of keyboards and orchestration in the sound of Exlibris? Are you conscious of the importance of balance with guitars for the overall final output?

Sikora: The thing about keyboards is that there’s all kinds of ways to use them – and I like to utilize as many as I can. They add different textures to the sound and they make the use of more interesting harmonies possible. Working with orchestral arrangements is a special kind of challenge because it means writing for the band and all the orchestra sections at the same time, making them work together – and although it’s only a virtual orchestra on my computer, I always make sure that the parts they play are playable by real instruments and sound as natural as possible.

But while we there’s a lot happening in Exlibris’ keyboard and orchestration department, we’re still primarily a heavy metal band and I always make sure that’s very clear.

Dead Rhetoric: How would you describe Exlibris when it comes to your live performances in comparison to the studio work? What have been some of your favorite shows in your career to date?

That being said – I gotta admit it’s significantly more fun playing for a big crowd that can get loud and go crazy. Both our performances at Woodstock Poland definitely deserve a mention, especially the 2017 one. Some other memorable moments would be us opening for bigger bands like Def Leppard, W.A.S.P. or the sold-out show with Steel Panther. The thing about those is that usually most of the people who came to the show had never heard of us before – and if we can see them clearly having a lot of fun during our set we know we’re doing something right!

Dead Rhetoric: Considering the wider underground love for extreme metal and doom/stoner bands in Poland, does this make it more of a challenge to gain proper respect and appeal from the metalheads in your country – or do you consider this a unique advantage? What do you think of your domestic scene overall?

Sikora: Unfortunately it’s definitely more of a challenge than an advantage. It’s not like there aren’t any traditional metal fans in Poland – there’s actually quite a lot of those but most of them aren’t really interested in the domestic melodic metal scene and there’s probably one reason for that…. There really isn’t one. I mean – the population of Poland is four times that of Sweden or seven times that of Finland… and there’s currently maybe a dozen bands who know what they’re doing. That’s still probably more than ever before. I suppose after years of not finding anything interesting in the domestic scene, metal fans – consciously or not – just assume any band coming from Poland is inferior to bands they already know. Instead they’ll just focus their interest on a few bands they’ve known for years. It’s going to take more than just a few good bands to change that.

On the other hand – we have a very interesting black metal scene – bands that aren’t afraid to explore the genre in their own way. And the stoner/doom bands, while not necessarily all very original, are easily on par with their European counterparts. Those scenes have followings that are not necessarily very big, but genuinely interested and involved. And that’s what counts.

Dead Rhetoric: What do you see as the biggest challenges the band currently face – and where would you like to see the band develop over the course of the next couple of years?

Sikora: We’d definitely like to tour outside of Poland more. We’re doing just a few dates this year but hopefully many more will come in 2019. We’ll probably start writing new songs soon as well. We’re not gonna rush anything but I don’t suppose it’ll take another 4 years to release the next album. The most immediate future for us involves shooting our first professional music video. I’m really looking forward to that.

Dead Rhetoric: Do you have any favorite hobbies, activities, or interests outside of music that you like to engage and participate in when you have the free time to do so?

Sikora: None of us do music for a living so I suppose that’s really ‘the’ hobby we like to do in our free time. In my case it really takes up most of it – when I’m not writing, recording, rehearsing or performing I like to see other bands. In Warsaw there’s something going on pretty much all the time so sometimes I go out to concerts as much as five nights a week. I’ll basically go see any artist that at least seems like they could be interesting, if I have the time.

Dead Rhetoric: Has your view on the music business changed from when you first started playing music to this latest effort with Exlibris? How do you feel about the social media/ instant technology tools at your disposal that can help you promote your efforts almost on a level playing field to bands that possess major label support?

Sikora: Most of all we’ve learned it from the inside and realized how wrong most people’s impression of it is! I mean… I meet people all the time whose idea of how a band works is probably based on some old movie they’ve seen and a couple episodes of Cribs. They’re genuinely surprised that members of a band who released an album still need a day job. I guess they don’t really think about it and don’t even try to do the math. Anyway – the business has changed a lot since the 90s, that’s for sure. Obviously most of those who had a career back then will tell you it changed for the worse and from their point of view I guess it has. Records don’t sell like they used to. But I don’t really see it that way. The main difference is that nowadays basically anyone can make an album and release it. You don’t need thousands of dollars to make a decent sounding record anymore. What it really means is that it’s no longer up to some guys with fat wallets to decide what people get to hear. Of course a big marketing budget still helps and most people will still settle for what they’re exposed to on the radio and television but actual talent will reach those who can appreciate it anyway – and I think that’s awesome. It might be the best time yet for music outside the mainstream – even if it’s not necessarily the best time for musicians.

Dead Rhetoric: What worries you most about the world that we live in today? If you had the power to change things, what do you think needs to be taken into consideration or worked upon first for a better society as a whole?

Sikora: I never followed politics very closely but now it’s kind of hard not to if you live in a place like Poland. Racism and nationalism are on the rise and when the government actually supports it – that’s just messed up. In general, I believe the world would benefit greatly if everyone stopped being so concerned about other people living their lives differently. The world changes, societies change. The constant in all of that is that guy yelling that it should go back to the way it was back in his day. I get it – you knew that world, you don’t get today’s world. That doesn’t make your world better. Move on already.

Dead Rhetoric: What activities are on the horizon for Exlibris over the next twelve months? Has work already begun on the next album, and if so what do you foresee taking place?

Sikora: Actually we barely started working on the live performance of the new songs so we haven’t really given the next album any real thought yet. We have some leftover material from when we wrote songs for Innertia that is not bad at all – some of it might make it to the next one but it’s really too soon to tell. As far as I know we could do a jazz fusion album with dubstep influences next. I’m not saying that’s very likely to happen but you never know! 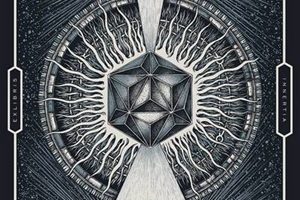