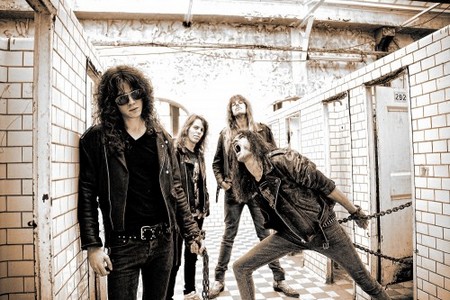 Dead Rhetoric: Describe a typical Evil Invaders live show in your eyes? Do you see major differences at this point between club shows and festival audiences? And what have some of your favorite places to play or tours been at this point?

Joe: That’s a hard question because it’s always different. It also depends on what time you play too. If you are playing and it’s already dark outside I wouldn’t say there’s much of a difference apart from the contact you have with the fans. At festivals you are obviously a little further away from the crowd. I would say that we play with a lot of energy and we want to feel the adrenaline pumping. We have a lot of head banging and running around going on, and if you are playing in a club it’s easier to play with the lights. It’s always dark in a club, you are close to the audience so I guess clubs are better for us right now. It suits the music better, we are closer to the fans and we have more contact, some stage divers going on. With the festivals you can’t deny that playing for such a big crowd, that’s a total blast. We’ve played at Keep it True, Graspop Metal Meeting, Devilstone in Lithuania, those were great gigs. We like both. I like to be in contact with the fans, so for me, maybe club shows are better.

Dead Rhetoric: There seems to be a special bond between a lot of the newer traditional/power/speed oriented acts from Europe and Canada, as I notice a lot of touring situations with Stallion, Alpha Tiger, Striker, and Skull Fist (who you’ll be touring Europe with again soon). Do you think this has helped elevate the style to a new generation of metal fans and spurred on healthy competition?

Joe: Yes, definitely. We get along really well with all those bands, they are friends. I have known the guys from Skull Fist for years, the first time they came to Belgium they stayed at my place and we partied like hell. It’s going to be really cool to tour with them because there’s going to be like no rivalry going on. Just dudes having a ball and I can’t wait to hit the road. It was the same with the guys from Stallion. You are all around the same age, the vibe is there, the fans like both bands, so it’s good for both bands. The fans of Stallion will check out Evil Invaders’ music, and our fans will check out Stallion, same for Skull Fist. And Skull Fist is really popular here in Europe so I think it’s a really good thing for us to be able to tour with them.

Dead Rhetoric: What level of importance does Evil Invaders place on their interaction and relationships with the fans? Do you feel it’s easier to keep active because of instant message and social media technology versus the older tape trading, snail mail days of the 80’s and early 90’s scene?

Joe: Your audience is way bigger on the internet, that’s for sure. I think you get real access to a lot of people with social media, but I’m not a big fan of social media. If you have a band, it’s a gift. Me personally, I don’t like to be behind a computer all day chatting with people – I like chatting with people but I’d rather do it face to face than writing messages on Facebook for example. Of course I have to because I am in this band and I want to have contact with people outside of Belgium, but I enjoy talking to people in the venues on the road. Being close with your fans is really important – they are the ones keeping your band going and if they are not there, why the fuck would you do it?

Dead Rhetoric: When not touring and performing with Evil Invaders, your day job is building and repairing guitars – as I understand it, the guitars you use with the band you made yourself, correct? What special qualities do you put into your own work?

Joe: I try to keep things really simple. I like to have one volume knob, one switch because on so many guitars you have so many buttons and I could do it too but I don’t see the use in it. We are playing so fast and I don’t have time to use all these buttons. I really like to make the guitars play really easy for me and to make them lighter so it’s easier to run around with on stage. They have to be strong but look cool too. I like special shapes in guitars and I think it’s really cool to have something that nobody else has. Effects though are something different. You always see these pedals and you know it’s going to sound better too, so for solos I do have some pedals. It’s not always easy to tap all these buttons, it’s such a good feeling when you feel the amplifier blasting all this noise out.

Dead Rhetoric: One of the funny things I saw on your Facebook page was when you were performing fog machine surgery, I take this is an important part of your stage show?

Joe: Yes, that’s for sure. We like to have this vibe, the fog gives you an obscure, 80’s vibe. If you watch a lot of the old videos, the bands are all covered in smoke and we really like to revive that. That’s what we do with our music so it needs to look cool on stage. Although things do break down sometimes.

Dead Rhetoric: Do you pay careful attention to the merchandise the band offers – taking into account not just t-shirts but also buttons, back patches, and so forth?

Joe: We recently released our first VHS tape, we recorded a live show and I think that’s pretty cool. Merchandise – I think it is important to have cool shirts, because it’s promotion for the band. If your shirt looks cool, people will want to buy it. I wouldn’t sell a shirt that I wouldn’t want to wear myself – it’s important with the artwork to have a cool vibe and represent the band. That’s what keeps you out on the road, if you have to pay a lot of money to get on tour the only way to get it back is trying to sell some merch. We can’t complain. In the summer I like to wear white t-shirts because it’s too hot. I like color in artwork. We even have baseball shirts because they look cool too. Everyone has their own option and not everybody has to buy the same shirt. We like to have a lot of variation.

Dead Rhetoric: What would you personally consider some of the best speed metal albums of all time? And what is the best concert that you took in purely from a fan perspective?

Joe: That’s a hard one man. Best speed metal record- I would say Exciter- Heavy Metal Maniac. The best show I’ve ever seen…whew! That’s hard. Recently I saw Exodus with Zetro on vocals and that was a total blast. Every time I see Overkill I’m blown away too. I saw King Diamond last year a few times – that was just awesome too. It’s hard to pick just one, oh man- Heaven and Hell on Graspop Metal Meeting with Ronnie James Dio on vocals. That was one of the best too.

Dead Rhetoric: Are there hopes for Evil Invaders to come to North America for some shows in the next year – even if it’s on a limited basis hitting the major cities?

Joe: For now we haven’t had anything planned, but we will consider it and I hope to come over. It all depends on the money I guess, because it’s pretty expensive to come over there. We need plenty of shows to see if we can get the money back, maybe 2016. For now we are really focusing on Europe.

Dead Rhetoric: How do you view the heavy metal scene in 2015 – do you think things are steady within your home country of Belgium and mainland Europe, or do you believe there are some areas that people need to improve upon?

Joe: There are always areas that people need to improve on. We are in a good area though, Belgium is not the biggest country but it’s really central in Europe – so it’s easy for us to access shows all across Europe. The scene itself in Belgium is pretty good- a lot of cool metal festivals, plenty of fans, cool clubs to play in. I can’t say that we are doing bad at all, things are going great. We did a few shows in Germany a few weeks ago and it’s always great there, we went to Spain- awesome. Everywhere we go is cool, even in the UK where we had heard a lot of bad things about it, but personally I didn’t notice anything different, they were all maniacs thrashing their heads off. Japan is a completely different world, we played two shows there with Possessed and At War. They were sold out two days in a row, and it was heavy metal mayhem. A lot of pictures of course, too bad we didn’t have time to do some proper sightseeing.