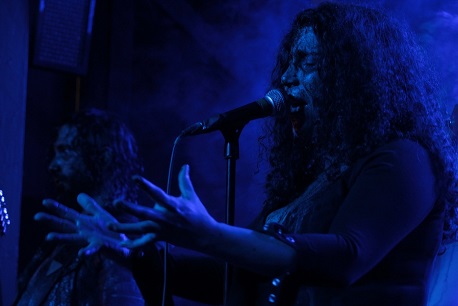 The tail-end of 2011 going into 2012 brought unprecedented publicity for the band. A stateside deal with Metal Blade figured to broaden the band’s reach, and it did – the band was one of the main support acts on Behemoth’s wildly-successful spring tour of that year. As Selim Lemouchi told this site’s previous Blistering.com incarnation, “One of the unique things about The Devil’s Blood as an organization is that by doing everything wrong according to the rules of the business, we have more or less, gained everything we have at the moment.” With so much already gained, the year of 2012 inevitably broke up the band…

The Thousandfold Epicenter (2011, Metal Blade)
Gehlke: The culmination of the band’s sound, The Thousandfold Epicenter is everything its predecessors were…and more. Blessed with some of the most harmonious vocal layering in recent memory, the cuts on Thousandfold were varied and staunchly immediate. Even the disco-boogie of “Cruel Lover” was a wild trip; sounding like the band could gave a flying-F what anyone thought. It’s this type of no-holds-barred songwriting that makes Thousandfold immensely captivating, from the mysterious “Within the Charnel House of Love” to “She,” which in another generation would be an FM radio hit. In all, this is the band’s apex, an ungodly, utterly mandatory body of work that would fly in just about any era.

Rice: The anticipation for me, personally, waiting to hear this record was intense. I remember begging Vince and Kelli from Metal Blade to let me hear the record and them telling me to wait and be patient. As a Rice, there’s no such thing as patience, but that’s an entirely different discussion altogether. On the cover and skin of it, you see longer songs, a longer record and extremely textured artwork. Rarely does that lead to a record where it follows suit, however in this case it does. Lush production reigns supreme and while it’s incredibly hard and driven, it highlights the playing of all involved.

Clever drumming (even though it’s almost all 2 and 4 rock stuff) keeps you hooked as it consistently pushes the songs through and through and through. Song writing that would make even the best producer in the world jealous and great riffing and textural layering. A record that doesn’t immediately drive its way into your mind and stay there for days, but after a few listens you realize the maturity and risks taken pay off in the best way possible. The best sophomore record you could ask for.

Bowling: Oh man, despite the buzz that began to swarm about this album in late 2011, I came into hearing it completely by chance, thanks in large part to a Sabbathy doom band called Orchid. Once the album began and slowly unfurled its countless and tightly packed layers, I was irrevocably in love. The bassline that runs throughout “Cruel Lover,” the scathing melodicism of “She”, and the hilariously titled (well, for my archaeology studies at the time) “Within the Charnel House Of Love.” Most lasting for me has been the title track, a sprawling yet tightly wound foray across the myriad of sounds and textures that make the band so obscenely endearing. Normally an album as long as this one (~74 minutes) tends to wear thin in one place or another, but here the pieces just came together in all the right ways. Even with the length, this is a breezy listen, now as much as the first time I heard it.

III: Tabula Rasa or the Seven Pillars (2013, Metal Blade)
Bowling: The grand tragedy – the album that never was. I jumped at the chance to inhale this release as soon as it came available, still reeling even five months removed, from the blunt announcement in January that the band had dissolved. I knew going in, however, that this wasn’t an album proper, but rather a collection of unrefined, un-honed, but mostly working demos. To its detriment, it shows in the over-sprawling nature of some of the tracks (ahem, “I Was Promised A Hunt,” I’m looking at you) and the sometimes annoyingly dingy drum machine that pulses throughout.

To its glory, however, the magic that ran so readily through the band’s previous work is still very much here, just in a more unshaped form. The same vibes run rampant, the same musical tricks and indulgences, even the greater shift toward the ritualistic in some of the songs. “In The Loving Arms of Lunacy’s Secret Demons” would, in its final form, had a chance at becoming one of the band’s most iconic songs. All the more the tragedy, then, that it will never find itself manifest in the world in that way. Bittersweet, relief in finding release of at least one more thing from the band, but terror in that it’s something equivocal to sketches.

Rice: This release was labeled as a full length by both Van Records and Metal Blade. It isn’t. While they said it’s a full length of demos, it should never be labeled as a full-length. It’s just that. Demos. Having never been fully realized by a full band, they are incredibly shiny demos but it’s unfair to the people paying 60 Euros (plus shipping!) for a triple gatefold special vinyl release. They’re demos, not a completed full length record. It’s a bruise on an otherwise perfect discography and while my morality may be standing in the way a bit, it still stings to see a band of this caliber going out on such a hasty note. Honestly, the second I heard the programmed drums, it was ruined. The ideas throughout are marvelous and had they been recorded with a full band, with the right amount of time put into this, it could’ve been the most appropriate swansong ever. Alas, it’s not.

Gehlke: I knew this one was in trouble when the mechanized clank of programmed drums opened up on “I Was Promised A Hunt,” which is a three-part mega-sprawler that is alarmingly lax in most of the facets that were so prevalent before, specifically those spellbound vocal craws from Farida. The album feels so neutered and half-baked, like, the band knew they were done, wanted to get out of their contract, so here, take this and we’ll bow out for the time being. The songs are largely shapeless, save for perhaps ““In The Loving Arms of Lunacy’s Secret Demons,” but in the end, Tabula Rasa is a gross miscalculation…and a totally underwhelming way to drift into the sunset.

I’m going to miss this band more than most bands who disband. Maybe because of the timing, maybe because of the wasted potential. Either way, they came and altered the way I looked and searched and felt about music in a way that is quite unusual for a musician. They made you look at other aspects of what’s important in music aside from the technicality, the chorus and the production. The overall aura of what was presented and feel was paramount to their creation, and for that they will be celebrated by many for years to come. – Jon Rice (Jon’s jacket is pictured at left, with a The Devil’s Blood patch adorned rather boldly)