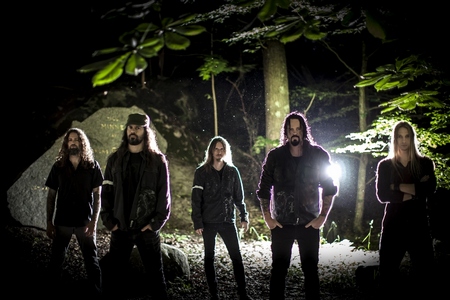 Fortunate to take in The Dark Discovery from my early co-editor years at Snakepit magazine, immediately the sound of Sweden’s Evergrey captured my headspace. There was a sense of heaviness and darkness both musically and lyrically amidst the traditional, melodic vocals of guitarist Tom Englund that other acts didn’t take into consideration. As the band’s profile grew, so did their popularity within the power/progressive metal community – gaining prime slots on festivals like ProgPower (USA and Europe), Sweden Rock, and Bang Your Head as well as touring escapades with In Flames, Nevermore, Sabaton, Kamelot, and Amaranthe among others.

As you will discover through this interview conducted on the phone while the band were at this year’s ProgPower festival in Atlanta, Georgia – the band almost died last year. Thankfully Tom summoned the strength and inspiration within to create a new record, the mighty Hymns for the Broken, an album that should please all who’ve been indoctrinated to the group at any point in their career. Gaining the chance to speak to Tom as well as returning drummer Jonas Ekdahl, you’ll learn more about the recent lineup changes, their favorite albums of the past few decades, and supermodels of all things.

Dead Rhetoric: How does it feel to have longtime guitarist Henrik Danhage and drummer Jonas Ekdahl back in the band, and did you understand Hannes Van Dahl’s departure to Sabaton?

Tom Englund: Yes, absolutely we understood that. Hannes is one of my best friends and he asked me what I thought we should do. At the time I didn’t know if Evergrey was something that I wanted to pursue for another real album, or at all. It wouldn’t have been fair for him to stay with me, so I said of course he should do that and off he went. We had two shows booked and we knew that Marcus (Jidell-guitarist) couldn’t make one of them, so I had to call the only two guys I knew that would know Evergrey songs basically. (We) played an older set, and it feels great. We are super happy to be back together. Doing these two shows we found out that we had missed each other and certainly missed playing together.

Dead Rhetoric: The new album Hymns for the Broken has been considered by many people a return to form record for Evergrey. I realize it’s still fresh from the songwriting and recording process, but where do you consider this in terms of your catalog of records?

Jonas Ekdahl: It’s the latest Evergrey album. It’s tough to compare every album. Every album consists of a certain period of time in our lives. All people change and the album that (just) came out we are so damn proud of.

Englund: It’s hard to get that question. They always want to ask you if an album is more like this one or that one. It’s like choosing your kids. We are super happy, the main thing is this album is a total band effort, everyone was involved in all the aspects every step of the way.

Dead Rhetoric: Some of my favorite songs on the new record include “Archaic Rage”, “Barricades”, and the moving “The Grand Collapse”. Are you conscious of song sequencing and its importance, especially on an hour long record like this, and what are some of your favorite moments on this album?

Englund: Absolutely, especially in the case of this record being a concept album. The song order, the dynamics, (and) the beats per minute song to song, that was very well thought out well in advance. That’s the thing we hate with Spotify and iTunes, that people don’t listen to the songs in the right order, but you can’t focus on those things either.

Ekdahl: On the other hand a lot of our fans are so dedicated they want to listen to it as it is. They don’t want to do the Spotify thing or YouTube thing with separate songs. They want to have the whole album, that’s why we just went for it. Everything is happening so fast in the media, one day you are there, the next you aren’t around. You have to be out there every day. We felt we wanted to do this concept album, a journey with 12 songs. If people don’t get it and listen to it as it should be, that’s cool – but for those fans that really know us, they are going to have a hell of a ride.

Dead Rhetoric: You are currently at ProgPower USA for a special listening session for the new album. Can you let the readers know the special affinity you’ve had for this festival through the years – considering the numerous appearances and unique setlists you’ve put together?

Englund: Glenn (Harveston) the promoter is one of my oldest friends. He was the guy with two other guys in the US to help make our first trip here, the Powermad festival in 1999. Larry D, Glenn, they all paid for that trip. Now he is this great promoter here, running all around like a crazy man. We love him dearly and we would do anything for him. We come here as often as we can, when he calls. This time the timing is great considering a lot of journalists are here, the fans are here, we had the listening session the other day and it was a really cool experience to stand out there in the main hall to blast the album out, fans buying t-shirts, and applauding each song.

Dead Rhetoric: Looking back at the development of your style, it seemed right from the start on The Dark Discovery that Evergrey was going to be a special progressive/power metal band, incorporating a host of heavier/darker/atmospheric influences than most bands. Were you conscious during the early days to create something unique/special, and did this take a while to develop?

Englund: The first review I read said that we don’t know what to call Evergrey in terms of a sound. I felt right from that day, that I have already done it. The only thing is we came from a very dark, blasting death metal band so we brought the darkness into the more melodic, ordinary singing hard rock band. That was the only conscious thought we had.

Dead Rhetoric: Solitude Dominance Tragedy is one of my all-time favorite metal records in history – are you surprised by the reaction you’ve received through the years to that record and its follow up In Search of Truth? Did you feel like you were hitting your creative stride as a band back then?

Englund: I remember we had a first small pressing to sell at that Powermad show, and I think it sold out that day. For the first album we were just recording the songs that we had, on the next album we brought in the harp, the violins, the choirs, and that is when I realized what I wanted (Evergrey) to sound like. I also think it is a great album and stands the test of time.

Dead Rhetoric: Were you disappointed in the reaction to the Monday Morning Apocalypse album?

Englund: No, definitely not. We actually sold more records on that album than on any other album at that point. The sad thing was… we didn’t understand the fans reaction. We packaged those songs in a new sound.

Ekdahl: The producer had worked with more commercial artists, and people panicked. It was the album we wanted to make at the time. I really love that album. But I can understand some fans got scared. By the time we released the album, some people thought it was a mainstream album. Every album is different and captures a certain period in time.

Englund: We still created those songs, no one told us what to do in terms of the writing or creation. If you want to blame someone, blame us!

Ekdahl: All of those songs on that record are so cool to play live, they get a great response live.

Dead Rhetoric: At that point, were you ready for more straightforward music?

Englund: Yes and no. People change and we got inspired by different things. We made sure we did what we wanted to do, and not what fans expect us to do. Because it’s about us, and we are going to be there in 85 years.

Englund: We have to live with that album for the rest of our lives.

Dead Rhetoric: Any fond memories in particular during your time with InsideOut?

Englund: Hmm… record label connection memories. I don’t want to bash anyone, so I won’t talk about the German side of the label and I’ll concentrate on the American side of the label. Jim Pitulski signed us on the second ProgPower festival where we sucked ass (laughs). I think he was drunk, but he’s a great sport.

Ekdahl: I remember my first time in the United States was 11 years ago, we played at the festival and Kevin Moore was there. Inside Out had this merchandise stand, I met Jim and I asked him if I could have some CD’s. He said, ‘sure’, and I grabbed 12-15 CD’s. This guy’s face was priceless, there were piles of music, I carried them all, his face turned white. He looked at Tom and said, ‘your drummer is going to ruin me.’