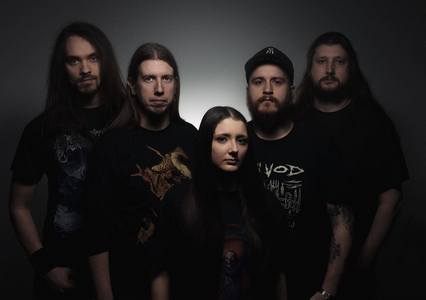 Dead Rhetoric: How would you describe the Slovenian metal scene in general? Do you believe you have great opportunities for shows locally, in addition to the awesome Metal Days festival? Who are some bands that we need to be looking out for in the various genres?

Ivan: There is Noctiferia, one of the oldest and still running Slovenian extreme metal bands, the guys who paved the way for the others with international record deals, European tours etc. Talkin’ about worldwide recognition, one should not forget Within Destruction, slamming death metal sensation who are travelling all over Europe, getting high praises, crushing all obstacles with their album Void and being hard workers and over-achievers by handling everything themselves. Extreme metal is also played by Dethrone The Corrupted, Carnifliate, death metal is done right by Morbid Creation, Dickless Tracy, Armaroth. Goregrind is well represented by Vulvathrone and let me not forget the cult grinders, Extreme Smoke 57. Progressive death metalers must hear Cordura, Meshuggah/Gojira fans will love Morywa. Black metal? Ater Era, Somrak, Samomor, Cvinger.

But Slovenia also delivers awesome thrashing maniacs Panikk, who will be loved by fans of Vio-Lence, Testament and Exodus, youngsters Moshead, who are more Metallica-ish, fans of Vektor and Voivod and even Gorguts and Death should check the awesomeness that is Teleport, while diabolical speed metal maniacs will also hail Vigilance, one of the bands who also play all over Europe and release awesome albums. Let me not forget the worshippers of Hellhammer, Hellsword, an awesome diabolical trio; Europe wide recognized all female (except their bearded guitarist) doom act, Mist; metal warriors Metalsteel, who are also known throughout Europe and have been cooperating with legendary James Rivera in a live project Sabbath Judas Sabbath; old school speed fans should check out Sarcasm, who’ve been around since the late eighties. I must not forget the leaders of thrash revival in Slovenia, Negligence, who were also a part of Metal Blade family for a while, and the young and crazy guys in Classified.

And that’s just a part of it, haha.

We also have a metal radio show, Metal Detektor (http://www.radiostudent.si/glasba/metal-detektor) – I’m hostin’ it every Tuesday. It is aired by the oldest European alternative radio station, Radio Student, situated in our capital Ljubljana and been spreadin’ the music since 1969!

Dead Rhetoric: What have been some of the best Eruption shows through the years – and how would you describe the band when it comes to live performances? What do you hope the audiences get out of the band on stage?

Nika: Well, I’ve only been with these guys for about a year. I’ve had a blast every time, but if l must choose one, I guess it’d be our gig in Vienna in October 2016. It’s one of the first shows I played outside the borders of our country, and the people were absolutely insane! Thrashin’, moshin’, screamin’ the lyrics, you name it! It’s probably the first show where I finally felt like I really belong in this band, all thanks to the insane energy on and off stage.

Ivan: Whoo, to many of them, (laughs)! I must say that when we step on stage, it’s our time to shine. We are a live band – we give 110% and we demand as much from the crowd. Our show luckily does not consist of our vocalist begging the crowd to participate – people usually do that by themselves when they hear the opening track, (laughs)! We are crazy on stage – there’s lots of movin’, thrashin’, skankin’! We don’t just stand there – even me, I sit (being a drummer and obviously a master of pretty bad jokes) – Eruption lives up to its name: we are a goddamn metal volcano on the stage. We hope the audience enjoys our show as much as we do. Believe me – every time you see us live, you’ll get your ass kicked by the sheer ferocity of our music and our performance!

Andrej: Exactly. Some of the best shows are the ones where the audience really picks up on the energy Ivan mentioned and just gives it their all. Doesn’t matter if it’s singing along or moshing, as long as they’re into it, so are we!

Dead Rhetoric: What is your definition of success for the band? Where would you like to see yourselves in terms of a career over the next 12 to 18 months?

Andrej: We are definitely not driven by any kind of material gains. We do feel very strongly about our music though and we enjoy people sharing their love for the songs with us immensely, so we are definitely hitting the road in Europe this fall. We’ve got things confirmed already but we’re still waiting for everything to come together in order to make it public. We’ve already got a selection of gigs confirmed in the following months, with Austria and the Dark-O metal fest in Croatia being the highlights. As for 2018, we’re really hoping to play more festivals because those are always a blast and a great opportunity to make fans and friends. The European festival circuit is normally well organized and you can pretty much count on playing shows without a hitch, so that’s always an added bonus because you never know what you’re going to get with clubs. To sum it up, we want more gigs and more fests – our only measure of success is playing out and making people bang their heads. It may sound worn out and somewhat juvenile but we feel strongly that that kind of intensity is what metal is all about, the second you change that, the potential dilutes.

Dead Rhetoric: What are your thoughts on the metal scene today? Who would you consider some of your role models or benchmarks that you would like to mirror their outlook, output, or professionalism for comparison’s sake?

Klemen: I think the metal scene in general is very healthy these days. Young bands are putting out great albums, while the old guard still provides us with solid releases. I’m not really big on role models, but I try to learn as much as I can from great vocalists and front men. A performer every front man should look up to is Mark Osegueda from Death Angel. He’s a really good singer but his stage presence is just phenomenal and he seems to get better and better with age.

Andrej: As far as professionalism is concerned, the benchmark is the highest you can set it for a band of our level. We have a set rider, are always quick to load in and have no qualms about sharing our gear as long as the other bands can take care of it. Musically, I think heavy music is in a rather strange place right now. In the 80’s you had glam and thrash which both revolved around acrobatic guitars and crazy singers, so the differences between both genres were kind of blown out of proportion, if you ask me.

Right now, you’ve got metal bands who rely heavily on extended range guitars, extensive use of live backing tracks and tons of effects on one hand, and then you’ve got bands who stick to the classic metal band format. It’s almost as if you’ve got two separate genres both called metal these days, the fans and musicians of both styles rarely mingle. Personally, I’ve always been into bands who stick to what’s always worked for metal music and add their own twist to it. Visigoth are a cool new band who pull this off, for example. We try not to “mirror” what other bands do but seeing Evile playing live with two cranked EVH amps definitely made us get EVH amps and, well, crank them! Death Angel is always a trip because they’re so good on stage, like Klemen said.

Nika: I think metal today still reflects its initial ideas, and that’s good. It’s amazing how after all these years it’s still as strong as it was when pioneers began to shock the world. The only problem is that we are overflowing with concerts and festivals. People rarely take the time to go to a local club and listen to some local youngsters, and give them their support (except when there’s a good headliner, and even then people won’t listen to the opening acts). It’s all boiled down to seeing more big bands for less money, and in my opinion, this is not (what) a healthy scene should look like. Empty clubs are not cool man, and young bands deserve to be heard, otherwise it’s nearly impossible for them to ever establish their name. As far as role models go, I’m not a big fan of those either. Sure, I aspire to be as technically profound as Flea, Steve Di Giorgio or Les Claypool, but I don’t want to copy their style, much less be exactly the same.

Gregor: In my opinion, metal has become a symbol for the biggest devotion possible. No other genre requires so much time and devotion to the instrument/vocals from a person and the only reward is a good show. It is the most sincere genre, that is why it is still surprising everyone today that you can still find new bands that kick ass. I have been a metalhead for over 20 years now and yeah, I do dress differently, but when I am with the guys at a practice or at the concert I am still the same beast I was 20 years ago… I guess my conclusion would be: metal is doing just fine…

I love a lot of musicians but I never wanted to imitate one. I think the reason why you like someone is because they are unique and they cannot be imitated, but of course you can learn from them and develop your own style. The closest to role models for me were: Jon Schaffer, Yngwie Malmsteen, Dave Mustaine, Lee Altus, Gary Holt, James Hetfield (early days).

Ivan: I also believe the scene today is amazing. There are still plenty of young bands, our contemporaries so to speak, that deliver amazing albums in a vast sea of different extreme genres. Seeing so many bands still kicking ass and there are so many amazing drummers out there, they just inspire me to create more, but also remain myself, unique in my own ways. Throughout the years, I learned and got content with the fact that I don’t want to be a drumming showman – we have Klemen who is an awesome vocalist and frontman, and an amazing string bending unit in Grega, Andrej and Nika. They are the ones to be worshipped, (laughs). I’m just sittin’ in the back, showing the world that my role is being a strong foundation of the songs, not their centerpiece. When I read reviews I’m actually glad the journalists emphasize the roles of guitars, vocals and bass, not drums. I mean, I’m proud of what I did on the drums, but I don’t wanna be in the spotlight. Before I forget – I’m still inspired by the old masters (Lombardo, Witchhunter, Strickland, Benante etc.), but I’m also following the contemporaries like the amazing Pete Webber of Havok. 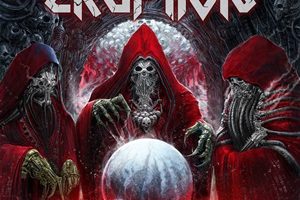