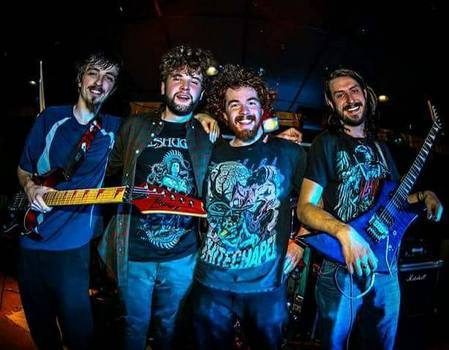 Dead Rhetoric: How do you handle the lead parts between Jared and Ryan?

Towne: It doesn’t need to be a competition – even if he has one, and I don’t- we try to make it as musically flowing as possible.

Burke: We both learned how to play guitar, while playing together. At first, we were both learning how to sweep pick at the same time. Our styles you can pick our penmanship apart a little bit more now than you could before. My leads and Jared’s – it depends on what’s applicable. On “Sheepdog” I don’t have any leads- Steve wrote that song and he wanted something more in the lines of what Jared would do so that made sense to me.

Foley: We get to know each other’s styles and we can say, like Jared for “Sheepdog” it was an old school thrash riff and I knew he would hammer out a great solo there. The way they solo- their skill levels are the same, but they play things differently. You know everyone’s style and how they would do it- then you can kind of pick what works where.

Towne: I don’t think there has ever been a time where we’ve had a decision that it wouldn’t work another way.

Burke: Even getting back to when we were playing birthday parties when we were 16, we would just be like ‘do you want to take this solo?’… one of us would pull through. We don’t have a problem with it.

Towne: Even if I just stayed as a rhythm guitarist and you took all the solos, I really didn’t care.

Burke: I knew though you were just as good at leads, so that would have been stupid.

Dead Rhetoric: Is it hard for you guys to imagine you’ve now been together as Epicenter for over ten years?

Foley: I feel like I just joined a few months ago (laughs).

Towne: I look back to some of the Facebook posts to when he first joined the band, and I think ‘woah’.

Foley: The CD release for the last album was my first time playing out with them. It’s funny, when you think about progression, you learn something new and it’s a big deal. When you get to a new skill level, each higher progression is more refined. It feels like not a lot of time has passed and we are playing the same stuff, but then you see things on Facebook – and you realize how far you’ve come.

Burke: We’ve been in this band a surprising amount of time given how old we are. I personally don’t look it as are we going to make it another year until we break up- we just don’t quit and we won’t quit. It feels crazy, it’s a bit of family.

King: Jared and I, he played trumpet when we were in a school band. We all grew up together.

Burke: Developmentally my brain was still developing while I was playing in this band. A part of me was kind of raised by the band.

Towne: We all just kind of fell into this genre, to be honest. (Zach) asked me to join the band when we were in high school, and I didn’t even ask what kind (of music) they were playing. It went where it went, and here we are.

Burke: The first time I ever played in a band with Jared on stage, we were in a Kiss tribute band for a local battle of the bands. I was Ace. Our buddies told us we had to be Kiss, so we said alright. That was my first time playing guitar on stage- I can count maybe only a handful of times where I haven’t played guitar on stage with Jared.

Foley: That was my first night too playing on stage at battle show- just in a different band.

Dead Rhetoric: Being a newer thrash band compared to the old school bands, where do you see the differences between the old school and the newer breed that has developed over the past decade or so?

Towne: The fact that we can look back on what those bands had written at the time, it was ahead of its time. We already have their platform and we can build upon that foundation.

Burke: We are just fortunate to have the ability to be a fan of Kreator and Animals as Leaders. Because Kreator couldn’t have done that- so there are just more ingredients to be able to use that weren’t available before. Individually as musicians, there is more to pull from.

Towne: We are trying to make a soup- but we have like twenty ingredients instead of five. We can make more up.

Burke: But then the question comes up, do you stick with the tried and true thrash formula and what people like, or do you think about where else this can bring us and hopefully you fall into a different category that we will be okay. If you make something new, what’s that going to be? Do you worry about the risk and find people that are not into it, because they are expecting something like Slayer? I think that’s a fun idea.

King: The internet has been huge. You don’t even have to go into a record shop to be introduced to tons of music. That whole revolution of almost anyone being able to record in their house and put out an album, the pool of what we can listen to has expanded exponentially.

Dead Rhetoric: What would you consider some of the career highlights with Epicenter?

Foley: We did our first tour a couple of years ago, and that was exciting.

Burke: We got to be in Philadelphia during the Democratic National Convention, which was rad. That was a busy thing. Personally, the fact that we are still doing it. We have album two now, which is cool because not everyone has one album. We are selling a good amount of records internationally- we have people in Denmark that want to buy our record and go through our cartel website to do it. We are growing, it doesn’t feel like a waste, and that’s my whole accomplishment thing. Individual shows, there are highs and lows.

Foley: We feel like we are gradually going up and expanding. Playing more, now we have more songs to choose from for shows. Before, you think about songs that are ten years old and we don’t have others to replace it.

Burke: I like the idea of always growing- as musicians and as performers. Steve was like ‘I can make a light show’. At first it was this wicked goofy thing, we would step on switches to activate a strobe light over here. Now the set up is a streamlined, organized idea which is very cool. The personal abilities, new trains of thoughts, and applying it to things. We are actively growing and expanding as people, and that is a cool career accomplishment.

Dead Rhetoric: Would you like to sign to a label, or do you enjoy the independence you gain from doing things on your own?

Towne: It all depends on if they tried to make us do something exponentially different than what we are already doing. If they were only hiring us as musicians as opposed to how we write and develop things now, probably not.

King: The biggest help would be promotion and getting us out of this nook of playing in New England. My dream has always been to travel around and play music as far as I can go. I feel like without a label it can be pretty daunting.

Burke: But look at a band like Lich King, they just go out and do it. But everyone isn’t Lich King too. If we take the PR/business stuff, we could focus more on just being better musicians and not lose sleep online about posting all of these things online, we won’t be able to play in Philadelphia. It would be less strain- but it would be spooky to see how labels feel regarding what else you would be able to do within the thrash realm. I could see a label saying, ‘hey that’s cool… but don’t do that!’ (laughs).