Epica – The Road Ahead 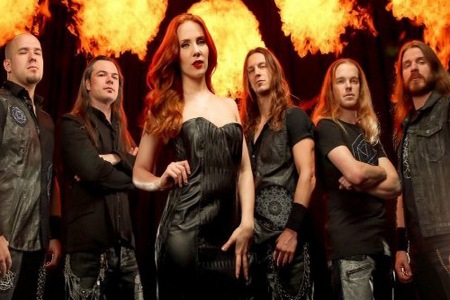 There’s much excitement to be generated from the Epica camp at the moment. A North American tour with Moonspell and Starkill to make up from missed dates last fall (Simone Simons’ father was seriously ill) and moving increasingly closer to a new album hit the top of the list. But they’ve also been busy organizing their own festival (Epic Metal Fest) and touring across Europe…with even more touring to come before said album reaches the stores.

Finally getting over to the US for a proper tour for 2014’s The Quantum Enigma, DR was able to sit down and have a chat with bassist Rob van der Loo before the band’s first date of their current tour at Irving Plaza in New York City. Talk of the upcoming album and its progress, the band’s choice of touring mates, album length, and even Hellboy follow below.

Dead Rhetoric: Epica has finally made it back over to the States after some difficulties along the way. How’s it feel to be back and finally being able to tour over here for The Quantum Enigma?

Rob van der Loo: Great! It’s been quite a while! First we had the bummer with the Machine Head tour and then last time we had the problems with Simone’s [Simons] dad being in the hospital. And he’s been doing great. But it’s great to finally be back, so let’s do it!

Dead Rhetoric: You’ve made some progress on a new album. Where are you at this point?

van der Loo: To be honest, I just finished the last recordings for bass last Saturday. Drums are already done, the bass is done, and the rhythm guitars are already done for sixteen tracks. We are working on the arrangements for the choir and orchestra, finishing the last lyrics, and when we get back we will be starting on the rest of the guitars. Then we’ll start in with the choirs, orchestra, and then somewhere around April we will do the last vocals and then we should be done. So we are making serious progress!

Dead Rhetoric: Any projected release date at this point?

van der Loo: It is going to be in September.

Dead Rhetoric: Epica always has lengthier albums. Is it ever a concern that there’s “too much” given the limited attention spans of the general public?

van der Loo: Yeah, I know what you mean and to be honest I do agree on that point. We are still discussing how we are going to do it for this album. We’ve got to see which songs fit really well together. I wouldn’t mind doing an album that is 9 tracks, and not do the whole 75-minutes. Maybe 50-minutes or so. I guess we’ll have to see how everything comes together for the album; we are going to do bonus tracks anyways, because that’s the way to do it these days. We’ll see. To be honest, I’m not a big fan of albums that are completely filled; I prefer an album that’s like 45-minutes and when I listen to it, I want to put it on again. I’m also a big vinyl fan, so I prefer the length of 40-minutes [laughs].

Dead Rhetoric: You had Epic Metal Fest for the first time last year. How did it go over?

van der Loo: The idea came to our attention when we played the Sabaton festival a few years ago. We thought it was a cool concept for a band to have its own festival and thought, “why not do the same thing?” So we invited bands that were friends of ours or we toured with. We didn’t focus on one specific genre. There are already a number of festivals that focus on one thing, like the female-fronted genre. So we said screw it, let’s do all these different bands from death metal to gothic. We did it at the same venue that we did the Retrospect show and we sold that out a few years ago. So we just took a chance and said let’s do it! It went pretty well; it was pretty packed. We are going to do it again next year!

Dead Rhetoric: So do you think it will become a yearly thing?

van der Loo: I don’t know if it will be a yearly thing, but we are definitely do it another time. We want to try it again. We also have plans of doing it internationally.

Dead Rhetoric: Given the tour package with Moonspell and Starkill, and what you would have had last time [Eluveitie and The Agonist], do you try to go out and find bands that sound a bit different than Epica?

van der Loo: Yeah, it’s a good thing. We’ve done that in the past. We’ve done bands with the same genre, and I think it’s a bit of an overkill to do 3-4 bands from the exact same genre. It’s not that I don’t like the music or anything, but you have to think about the audience. It’s good to have some diversity in it. I remember the last time we did a full US tour when went out with System Divide, Insomnium, and Alestorm. Four completely different bands, but it turned out really well. So we decided to do it in the future. Last time we did it with Eluveitie in Europe and it also worked out well.

Dead Rhetoric: Because even at your level, you can still gain new fans that way.

van der Loo: Sure, that’s the way we also see it. I still don’t understand why people see the whole female-fronted metal thing as a genre. It’s nonsense. Ok, we have a female singer, and that’s it. That’s one of the things that really changed with Epica over the years. In the beginning, people saw us more as a gothic metal band, and these days more as a symphonic metal band. The way it should be!

Dead Rhetoric: Given your sound, have you had to fight against that tide in regards to having a female vocalist?

van der Loo: Well, the thing is that we don’t really care about that. We just do what we have to do. It doesn’t really matter what genre you put it in yourself, it’s always the media or the audience that will put a certain tag to it. People will call it hard rock, or gothic, or female-fronted or whatever. The audience/media always sees things differently, and they will put you in a certain genre and that’s what people will call you. Just do what you have to do, that’s the most important thing.

Dead Rhetoric; You all arrived in NYC yesterday, did you get to do anything interesting?

van der Loo: Actually I arrived a day earlier just to get rid of the jetlag [laughs]. Yesterday I actually went downtown to check out some vinyl stores and some comic stores; I’m a big comic nerd myself. I had a good dinner and just relaxed. It’s good to be here, I always want to see this city. I can sit in the hotel all day, but that’s so boring.

Dead Rhetoric: So what are some of your favorite comics?

van der Loo: I’m a huge Hellboy fan. My favorite writer is definitely Mike Mignola. I like everything he’s ever made. I always go to comic stores and that’s the cool thing – he’s made a lot but Hellboy is not like Batman. If you want to start collecting Batman stuff, it’s impossible! It’s so huge. Hellboy is smaller, but it keeps it more special I guess. But I also collect the statues and all that! I really like it, and I’m a huge fan.

Dead Rhetoric: Going back to the new album, does it get harder each time to make sure your own or fan expectations are met?

van der Loo: The biggest lesson I’ve learned is not to expect anything – just do it! Of course, The Quantum Enigma turned out really well. Probably even better than we expected in the beginning, and it’s quite difficult to top that. How are you going to do it? Most bands have a plan for it. But all you have to do is write songs, and write as many songs as you can but don’t force it. That’s one of the biggest dangers. We just chose to write our usual amount of songs and picked out the best. We wrote 27 songs and picked out 16, so we just took the best of it and we’ll see how it works out.

Dead Rhetoric: So what can we expect to see from Epica after this tour, other than the new album?

van der Loo: After the American studio we are going to finish up the rest of the album, or at least a piece of it. We are then going to do some shows in Australia and New Zealand. We are also going to do some shows in Asia as well. We are going into China, we will probably go into Indonesia and some other countries as well. By the time we come back from that we will finish the rest of the orchestras and the mixing process. This summer we will do a few festivals but we’re going to take it easy. I guess we also deserve a little bit of rest as well. So by the time we release the new album, tours will be coming as well. It’s good to have a little bit of rest.