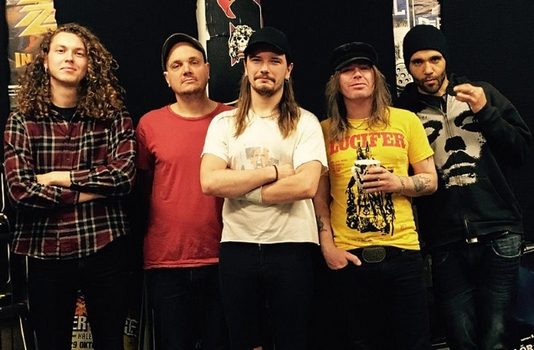 Dead Rhetoric: What do you see as some of the ups and downs that the band has had over the years?

Hellid: We were never really a band that had a long-term plan, so after touring started and you are lucky enough to have people who want to see the band, you can go forever on the road if you want to. I guess that started, since we didn’t sit down and decide what we were going to do so some people got tired [of touring] and you have a manager that is there to pick up the phone getting offers it is easy to get out there and keep working. Up to the third album, it felt like a pretty straight grind and things were going in a cycle – touring and recording. Then we had hit this place where we had to go away for what felt like an eternity where we were waiting.

We couldn’t record and we felt like we were losing momentum. Especially in America, Earache did this deal with Columbia at the time, so we had a really good team in the US, and when problems started happening and we decided to not record anymore with Earache, that whole momentum we had been working on wasn’t there when we came back with To Ride… in 1996-97. So that was definitely a low point going into rebuilding stuff again. We started touring again for To Ride… and that’s when Nicke decided that he had enough of the long tours. It started to go up and down. When Nicke left the band in 1998, we never really thought about stopping. We got another friend to come in so we just continued. That is probably the first time we did a few albums in a row with the same line-up [laughs]. Before that, there were always line-up changes. That’s also been a part of Entombed’s history.

These days, I’m more relaxed about that, and I accept that is what Entombed is. It’s not this band that’s like 4-5 people that stay together and do everything. It’s become more of a creature that we don’t really control but we want to keep it together, and I’m happy when we can do things together. I’ve always liked bands that would keep going, no matter what happened. I’m happy about that with Entombed. There’s always things that can be kept alive. I’ve always enjoyed that with bands I’ve grown up with – even if I don’t go to every Kiss or Iron Maiden show, I still get happy every time I see that they are active. If we can be that to someone else, that’s beautiful.

Dead Rhetoric: With that in mind, what does Entombed mean to you at this point in your life?

Hellid: Basically we have been doing it since we were 13, so it’s this crazy life thing that you can’t really get out of, so we deal with it [laughs]. It’s a great place to go and be creative. It’s weird – I’m the only one who has been doing only one band. Uffe and Nicke, they didn’t really have to deal with management as much, so they focused on doing other things when Entombed slowed down. Uffe did Haystack and Nicke did The Helicopters. Uffe actually recorded a Haystack album last year, so we are going to put that out on Threeman Recordings this year, as soon as I can finish some artwork for it.

I’m also putting out songs with a new project and not worry about who is in the band – its with a few different people. It will be interesting for me to do something outside of Entombed. But I’m really happy at the moment with just doing things together with the other guys again. Once we split with LG [Petrov] and the other guys in the band at that time, I never really thought about finding new guys. If we were to do anything, we needed to get the old guys back together. I really like doing things with our catalog, and make sure it’s available.

So there’s a lot of Entombed work to be done, even if we weren’t active, so there’s always things to do. But I’m happy that Nicke and Uffe are really excited about doing some more Entombed stuff. When we started rehearsing for these shows, I really enjoyed bringing everyone together in the same room and seeing that once we started to focus on the band, they both got Entombed ideas again. It’s really cool – Nicke and Uffe work fast. Once Nicke starts something, he just starts writing. He just can’t help himself from writing stuff, so it’s cool.

Dead Rhetoric: What are your thoughts on inspiring so many, even today, into death metal?

Hellid: We always felt that we were borrowing from a lot of other bands and maybe not doing the most original things. It’s just an honor to hear that people are influenced enough to see us as something they want to put into their music. It’s awesome. A lot of times we are shown things and told it sounds a lot like us, and it’s like “Ok, cool.” Sometimes we don’t even hear it, but it’s great that people take what they like and put it into new stuff. What more can you ask for to have happen? That’s a way to live a little longer than a human life – other people take parts of what we have done and keep it alive. As I said, we always felt like we were stealing left, right, and center from other bands [laughs]. So I guess that’s what is cool about it. Anybody can take anything and put it through a filter and new people play it, it can turn into something else.

I remember playing, maybe it was Monsters of Rock festival, and we were playing right after Slayer. They were playing the big main stage and had just finished playing, and we started playing on the side stage, and we felt almost embarrassed to play some of the riffs. We wondered if they would hear it – some of it was like straight from what we just heard, the Slayer notes we love. So it’s an honor for us – it’s nothing that we take for granted.

Dead Rhetoric: What other plans are there for Entombed at the moment, I know you already mentioned the potential for new material and taking the orchestral show outside of Sweden?

Hellid: We are working on that – to do more shows, and see where we can take the orchestration. Then hopefully before the summer we can start recording the songs we have already. We are also getting really good offers for shows. We hope to have something that we can put out and accept some show offers, if not this year then definitely some festivals next summer. We have the Haystack album from Ulf, and I’m going to start building my new thing as well. We also just put out an album for the guy that did the orchestrations for Clandestine [Wachenfeldt]. It’s a massive death metal album, but he also put some symphonic stuff in there too, it’s really cool.

We are also working on reissues and making sure the old stuff is out there. When we met up [with Nicke and Uffe], we recorded some songs from the first album with the idea of doing a 7” or something and telling the story of the band through the songs. So there’s a lot of ideas, and hopefully we have enough time management that we can finish some of these projects this year. We are definitely working on trying to get some structure, since it is something that we never really worked on before. Hopefully it will make the process quicker to release new stuff.

We did have some offers to do some things in America last year but it didn’t work out, so I’m hoping that we can get to the US in the next year or so. We have a good agent that we work with, so it feels like we are putting a good team together for when the time is right and we can do everything properly.