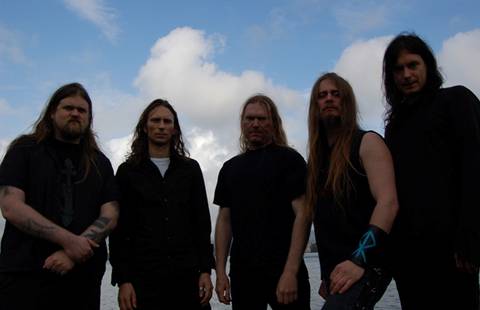 Last time Blistering caught up with Enslaved, the band were just start hitting their creative stride with Ruun and were in the throes of near-unanimous critical and consumer acclaim. The band was always polarizing from the start, as their status as the first true Viking metal band often separated them from the black metal pack, but when lead guitarist/songwriter Ivar Bjornson made the decision to go progressive, it is when Enslaved found itself in the enviable position of metal underground heavyweights.

We’ve been quite effusive with our praise for Vertebrae and frankly, there’s little reason why we shouldn’t. An album that has come on strong late in 2008,Vertebrae is at this moment in time, Enslaved’s career statement and apex. Knowing that Bjornson would have a lot on his phone, Blistering caught up with the soft-spoken guitarist for an interrogation.

Blistering.com: Did you follow the same writing process as you did for Ruun? Meaning, were you secluded for most of the time?

Ivar Bjornson: Definitely. That’s become a really big thing. It doesn’t normally have to include a lot of geographical distance, but it needs to put up some sort of symbolic distance or wall between ordinary, day-to-day activities. This time, we stayed not too far away and had some family went out of town for a few months, moved my home studio there, and didn’t tell a whole lot of people what I was doing. I shut the world out, turned off the phone and got into that writing mode.

Blistering.com: What type of comfort level does having the same lineup for three consecutive albums bring?

Bjornson: You know things are going to be stable and if you have an idea that’s going be controversial, so to speak, you know that the discussion is going to be at the level it needs to be. At the same, it’s very inspirational. After Ruun was released in May 2006, we did some extensive touring. We did two full European tours, a bunch of festivals, and some US tours, so we really got to know each other, too. That’s the inspiration – you know you can push the envelope. Their musical capabilities are limitless; they’re the perfect people for Enslaved. They want to apply that knowledge and experience to Enslaved.

Blistering.com: You’ve been going for this “less is more” approach for the last three albums as well. Is that at the forefront when you’re writing?

Bjornson: It happened naturally. The band avoided having musical discussions upfront. You need to just let the creativity flow and let it come from the lower part of your brain. Music comes from a strange place and if you try to verbalize and control it too much, it throws everything off. We’re five guys and have our approach to music and have reached our maximum energy level when we focus it and at the same time, we’re also quite aware of the value of when we divert our focus. There’s no point in everyone trying to be technical at the same time, there’s no point in everyone trying to be melodic all at the same time. You find guys that have a special musical expression and try to exploit that the best way possible.

Very often, that goes back to what you’re saying, “less is more.” It fits that space, so that the listener can carve their experiences. It’s not like it’s totally full and you have to pick up what you can.

Blistering.com: The best example of that is “Reflections.”

Bjornson: “Reflections” is looking like it’s going to be the opener for the next tour. It’s got the dynamics and production and mixing-wise, that’s the song that came out best. It’s a pulsating song structure with things contracting, expanding, flowing throughout the song and the vocals are amazing. “Clouds” and “Reflections” are my favorite two songs.

Blistering.com: Ice Dale’s (lead guitars) solo on that song is one his best, agree?

Blistering.com: With “Clouds,” there’s quite a bit of clean vocals from Herbrand (Larsen, keyboards). Was that song designed specifically with those in mind?

Bjornson: The guys work on their own after I send them demos and ask me what they should do with the songs. When they come back with the recorders and test vocals, so this time I thought with the more melodic and atmospheric guitar work, would provoke some more harsh vocals from Herbrand, but the opposite it happened. He’s doing 75% of the clean vocals and I have the same approach the vocals as I do my riffs and that’s just to find the best possible solution.

Blistering.com: As one of the first bands out of the gate that were openly a Viking metal band, how do you feel that it’s popular, just years after you went in a different direction?

Bjornson: It makes you think of you called up Gene Simmons and asked how to copyright it [laughs]. We could be rich now and swimming around in champagne. Seriously speaking, it was kind of surprising. I never thought about it, but when we used the term “Viking metal,” it had one or two basic functions and it was to define the concept. We came from the extreme metal scene in Norway in the early 90’s and the term “black metal” described a form of extreme metal with Satanic lyrics. We were extreme metal, but we didn’t fit into the whole Satanic fan club, so we needed something else to explain our concepts.

For us, Viking metal represented freedom and something philosophical. Going out and exploring, and collecting different things from different cultures. It represented the furious element, the lack of fear. It represented also, the total freedom in terms of musicality because the Viking era, had no music. This is the ironic part – they had the traditional of deliverance of stories. The ways of remembering stories of how things went down and sometimes they sent these poets from king to king to re-tell international lore. They’re making these poems with rhymes that were making their brains recall that information. So, you could be writing metal with any kind of music.

Then we started to get interpreted as Viking metal from a medieval sounding thing with costumes. We figured that’s not what we’re trying to do, so we backed off from the term and just went to extreme metal. For a few years, you had a few bands

, but now it has exploded. It’s becoming one of the biggest industries in Europe and for us, it’s pretty crazy. Their music reflects a medieval music tradition that comes from monasteries, so they’re actually playing medieval Christian music in Viking costumes, which, I guess, is not what we intended.

Blistering.com: Are there any bands that do this style well for you?

Bjornson: I think we’re about to enter a phase where management and booking agents see the commercial

value. I don’t think anyone is doing it to cash in; I think it just happened. I think the whole accordion, medieval music thing is common. It’s like that in other kinds of music, too. You have that where other people misinterpret music as Viking music. They think it’s from the 800’s, but they didn’t pay attention in class. It’s not like anyone is cashing in and there’s no bitterness or resentment.

I think you do have to pay attention to bands like Primordial and Amon Amarth. They have the same kind of concepts, but in different variations. Primordial is going very far into a civilization critique and Amon Amarth is going into a storytelling and history lesson. They’re both examples of bands that are this starting point, but their music is totally free of that.

Blistering.com: Plus, don’t you think you pushed it too the brink withBloodhelm and Beyond the Within?

Bjornson: It was a mix of two things. Enslaved, with our grip on the band and how much we put into it – the lyrics and concepts – we felt the same with the music. It needed to have direction and expand, so it was natural…we needed to see how the band functioned in different roles. That mixed with the lineup thing. The core of Enslaved being me and Grutle (Kjellson, bass/vocals), but we had some people that wanted to pull Enslaved in different directions. Like Dirge Rep, who used to play drums, came from a very puristic black metal realm and he’s still that way in his approach. He wanted to have his interests in the band and we’ve always had this open-mindedness as to how Enslaved should be. Where Dirge took it very far towards the black metal, Roy (Kronheim, ex Enslaved guitarist) took the very far the other way. Both those albums were necessary to go the outer limits of the universe, but both of those were in the parameters of where Enslaved needed to operate. We thought, if we went anything further in either direction, we’re going to lose our identity. It’s like you’re going somewhere in the dark with just flashlight and you get close to the edge and see it, but then you see the edge and decide it’s best to turn around.

Blistering.com: Along those lines, what is it like to have this freedom?

Bjornson: It’s fantastic. It’s one of those harvesting moments where back in the day where you had the extreme metal scene in the early 90’s. We were on the side of that and got some questions and all of these bands were really young. We were hanging out with Darkthrone, Mayhem, Emperor and of course, we might have gotten more credibility or ended up in the eye of the storm had we pushed the black metal thing a little bit or said something more extreme.

Then came the attention from the foreign media at the end of the 90’s and you would be at the end of line because nobody spent anytime in jail or said anything extremely political [laughs]. We were always waiting for that moment where it would be about the music, the message and the integrity of it all. Somebody asked us, “A friend

of mine recommended your album, but is it true black metal? I only buy true black metal.” We told them, “No.” Because we’ve never been true black metal because we’re not Satanists; go buy some Darkthrone. And it’s paying off because even the black metal crowd recognized we never tried to make a buck out of being “true,” and they recognized we share some common values musically and philosophically. It just represents total freedom. We’ve always done what we wanted and backed away when something didn’t feel right.