Enslaved – In Times of Change 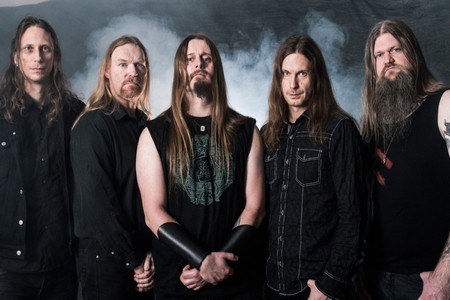 Having treaded the waters through the both the bumpy beginnings of black metal and holding the flag high for Viking metal, Enslaved has always been a pioneer. They are also a band that is not afraid to shake up the foundations and continue along their own path rather than follow the status quo. Founding member and guitarist Ivar Bjørnson says that change, “[is] the driving force behind the band. We try to challenge ourselves and push the next album further. It’s more something that we do for ourselves rather than a necessity. It’s not something we feel like we have to do or anything.”

Despite the progressive changes over the years, one thing that has remained constant is that of the band members themselves. Following a number of alterations to the band in the early 2000s, Enslaved has since been drama free, with no member changes. According to Bjørnson, the consistency in members has played a part in the band’s willingness to progress their sound. “The inner motivation is still the same. When we started the band we wanted to make music for ourselves. Having that internal drive is definitely a reason for moving forward.”

Never one to shy away from lengthier songs, In Times is comprised of only six tracks, yet tallies in at almost an hour in length. It’s a challenge for some bands to write lengthier tracks and make them stay interesting and meaningful. But with the approach the band takes to each album, it’s easy to see how they can manage to stay on top of things. “It’s written in a song-by-song mode,” states Bjørnson. “One song is almost always finished before we start the next song. It’s pretty linear, with modules so to speak. We start with the main part, not the intro, and then go back in and fill the details. Then we can start the next part of the song. Eventually, the last thing we work on are the transitions between the parts. It’s pretty straightforward in a sense. I’m not one of those guys who work on a section of one song and at the same time work on the intro to the next song. Each song has to be finished and completed. Maybe closure is the right word, and then I can move on.”

“We produced this album ourselves. It turns out that when we have that responsibility of the whole process ourselves and don’t have that external producer, it really helps to have an abstract concept on the top of the whole album. Otherwise it tends to divert into every direction. What we defined at that top level was that we wanted an organic album. It’s timeless, it’s placeless. In Times can mean anytime, anywhere. That’s what we wanted in the album as well. We tried to record things live and for all of these effects, which we used like synthesizers or keyboards on previous albums. This time we felt that we needed to go outside of that. We had some sounds that are less connected to a specific decade or specific music/tradition or whatever. So we out into the woods so we could start pounding on trees with branches and throwing rocks and stuff and recording that. It was pretty fun,” elaborates Bjørnson.

Black metal, recorded in the woods? At this point, it almost fits along with the old Fisher Price recorder joke that runs in metal circles in regards to the production and aesthetic the more underground black metal bands are known for. Did that cross the collective minds of Enslaved when they set out into the woods to record some parts of In Times? “Of course,” says Bjørnson. “In fact, we are eternally trapped in that sort of Spinal Tap universe. We can’t avoid that. It’s like every time someone asks for a lighter outside of a wooden building, we can’t avoid thinking about the church fires. We went out to this cabin in the middle of the night and we had this cart with all of the studio equipment and me being the big guy, I was out front pulling it like an ox balancing the thing. We were going across all these mires and swamp-like stretches and it’s the middle of the night so I can’t see the mountainside and we were going at steeper and steeper angles. The whole thing just fell over and there’s studio equipment all over the hillside. We had a small little flashlight and were trying to find the different things like the cables and the microphone and that’s when you think like, ‘nothing beats showbiz.’”

As mentioned, Enslaved were one of the first bands to really bring forth the Viking metal movement. So it seemed logical to get Bjørnson’s opinion on how he thought that the genre has changed over the years. “There was a Swedish band called Heavy Load, who were a Manowar-ish band that was around for a few years and then disappeared. Then there was Bathory, which had been disbanded for a while before we started. So we were pretty much left alone and we used Viking metal to separate ourselves from the black metal bands. It said something about the lyrical context. Before long, there was this new Viking metal scene emerged in the late ‘90s. To be honest, the first time we heard it we were totally shocked. We were at a festival in Germany and there was a band playing and they had an accordion and doing all this polka stuff and I felt very old. I was around 30 but I felt like I was 80. I felt like the old guy at the metal show on the balcony thinking, ‘what the fuck these young people doing?’ I didn’t get it. Then we completely felt like, if they want Viking metal term they can have it. We’ll stick with extreme metal or whatever.”

Now that the release of In Times is here, the band will set sail for North America. With Bjørnson being a purveyor of fine brews, “One of the highlights is going to be in Minneapolis and going to the Hammerheart Brewery. Last time we were here [in the US], we spent the night after a show at the brewery. They had very good stuff. Also in Minneapolis, Surly Brewing has made some collaborations in Norway. There is another one I want to check out some more called Three Floyds.” They’ll hit Mexico City after the tour ends, and then one of Bjørnson’s more anticipated events is that of curating this year’s Roadburn Festival. He recalls his thoughts on being chosen. “I remember last year when Mikael Akerfeldt from Opeth did it and feeling a little bit like a teenager and wishing and kind of thinking like, ‘damn, I wish I could do that sometime.’ But I didn’t think more about it, but we got into talks with Roadburn about bringing back Enslaved to do a show with the new album as well as talks about bringing the project that I have with Einar Kvitrafn Selvik of Wardruna to Roadburn. Then that sparked the idea with the Roadburn people. It’s a once in a lifetime chance, and very cool personally.”

Enslaved will be playing a special setlist for the Roadburn Festival. “I’m looking forward to doing the House of Northern Gods, which will be the first of three shows we do. [Its] in collaboration with the Romanian artist Costin Chioreanu, who is also doing the visuals for the festival. It’s going to be a mix of the mythological and a psychological journey for an imagined house, which could work as a metaphor for the human psyche,” adds Bjørnson. “It’s still going to be a concert, but the things that are going to happen between the songs and the presentation is going to take it to a different, and more psychedelic or abstract theatrical state.” Along with Roadburn Festival, the band will be making more summer festival appearances in Europe. So how will the remainder of 2015 look for Enslaved? “Sometime in early September we will be going to be in the UK, then Norway in October. Then we’ll hit the mainland in November. We are pretty sure we will be doing shows in South America and Australia after that, but we haven’t cleared that yet. But by the end of January 2016, we will have been a complete lap around the world and probably starting our second.”