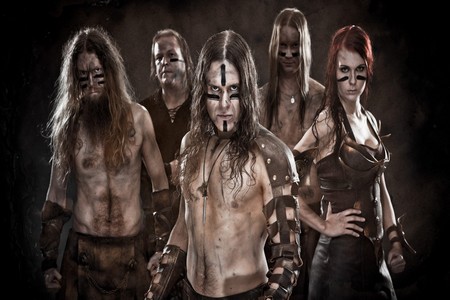 Dead Rhetoric: Are there any other territories you would like to get Ensiferum to play but haven’t as of yet?

Lindroos: So far we are only missing one continent – and that is the North Pole. That would be awesome to play over there- I have heard that Metallica has played a show over there, so it should be doable. Then we can say that all seven continents have been conquered by the band.

Dead Rhetoric: How much importance do you place in the visual imagery and presentation of Ensiferum, especially in relation to the style of melodic folk metal you display?

Lindroos: We do pay attention. It’s pretty much like getting into the character for the band, and for the visual appearance to make sure that we are not playing as the same kind of band with the Slayer t-shirts on. We like to have something special, every time you put on your show gear you are getting ready for the show. It is very important, yes.

Dead Rhetoric: Have there been any funny or dangerous situations that have happened when making Ensiferum videos?

Lindroos: Kind of. I’m not sure if this is so funny. When we did the video for “Ahti” for Victory Songs. It was scheduled to start very early in the morning because it was shot in the wintertime in Finland, and daylight is very short. I was at some kind of Christmas party the night before, so I overslept totally. Once I got to the location in Helsinki, the snow was really wet and half melting. They wanted the guys lying in a pool of water in the freezing cold. They were almost like snowmen when I got over there. Lucky for me I didn’t have to do that, so it was funny for me and not for them.

Dead Rhetoric: If you had the chance to transport yourself back in time, what era of history do you think you would most want to experience and live through?

Lindroos: Hmm… that’s an interesting one. I have no idea as to what time period. Probably the time way before the internet. Back to say 1985 or something like that.

Dead Rhetoric: Does it get very distracting or cumbersome to always have cameras around documenting your lives for promotional/social media activities – or is this an aspect that you feel comes with the territory in heavy metal circa 2015?

Lindroos: You just need to learn to live with it. It’s very hard to avoid that one. Sometimes it’s not so nice when you wake up from the tour bus and you get out to have your morning coffee and there are five dudes with their cell phones on, but otherwise what can you do?

Dead Rhetoric: Looking at your discography, which record would you consider the personal breakthrough maybe not necessarily from an audience popularity standpoint but more from a band satisfaction perspective?

Lindroos: I think I would go to the From Afar album. That was a great success for us and the studio time went very, very well. It was overall a very satisfying feeling after that one.

Dead Rhetoric: Have there ever been any dangerous situations that have happened on the road with the band- either on stage or travelling to shows?

Lindroos: This one US tour we did, we had a driver from Texas and we were crossing the Rocky Mountains at that point and it was winter conditions. It was early in the morning and for some reason I was awake. I was talking with the driver and he said that it was going pretty good, then he said the bus had no winter tires or snow chains, as well as telling us it was his first time ever driving in snow. I don’t know how many hundreds of feet the drop was on the right side of the road, but at that point I took my ass from the front of the bus into the fridge and got myself a six pack of beer. It was terrifying almost, I almost wanted to put one of our crew members from Finland in the driver’s seat to drive the bus. They know how to drive in the snow. Luckily nothing happened, so we are pretty lucky with that one.

Dead Rhetoric: How important is band chemistry in terms of establishing longevity for your career?

Lindroos: I think that is the key. The chemistry with everybody in the band needs to work. I wouldn’t like to be on a tour bus for 4-6 weeks in a row with someone I couldn’t even talk with. It would be terrible. Chemistry is very important, along with the band and the crew.

Dead Rhetoric: Do you enjoy the fact that the fans really get into the band as far as dressing up in some of the same gear you guys tend to wear?

Lindroos: Yes, it’s always cool. That is one of the things if you are going to see a hockey game you wear the local hockey jersey and gear to support them, I look at it in the same way. When people are dressing up and wearing helmets, swords, and shields, it’s very cool, we appreciate that one.

Dead Rhetoric: What does the rest of 2015 look like for Ensiferum in terms of promotion/touring for the new record? Any special treats down the line for the fans to look forward to?

Lindroos: Nothing super special is in the plan. We have shows in Finland starting next week, the European tour, and a USA tour after that, plus summer festivals in Europe. We are going to be very, very busy. The 70,000 Tons of Metal festival went well, we did 2 different shows that went over for an hour each. We would love to be booked again, we are ready to go. They increased the capacity of fans because of being on a bigger boat. I didn’t see anyone puke on the whole cruise, maybe the morning after though when you have enjoyed too much alcohol.