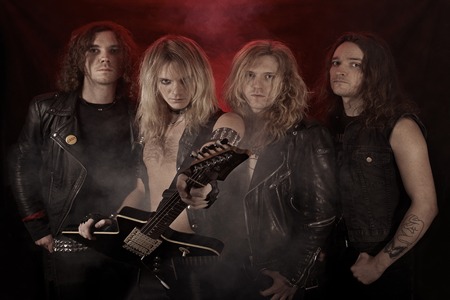 Dead Rhetoric: Exciter, Razor, Venom, and Iron Maiden are four obvious reference points many listeners and media people cite when taking in Enforcer. What do you believe you are trying to get across with your style of heavy/speed–oriented metal?

Wikstrand: Not that we are looking back, this is what we originally based our musical style on. We want to take things further, and always try to push the limits all the time. That’s the way I see things- of course we will never get rid of these people that have a huge lack of knowledge about metal music. The twin guitars cause those people to think- ‘oh, you are Iron Maiden copies’. And I think we will always have to deal with some of that.

Dead Rhetoric: How important is keeping the production values clear and at the same time true to form, given most studio work is now digitally driven compared to the analog studios of the 70’s and 80’s? What are your feelings on current tricks of the trade with artists sampling tones and sounds to overshadow ‘real’ playing ability?

Wikstrand: I have absolutely no problem with digital productions. That’s not the problem in regards to modern music. The problem is about trends and attitudes about mixing and recording. All the good in the world regarding digital recording in terms of making it so much easier for musicians- if you know how to use it, that is the problem. The people who use technology too much – that type of sound doesn’t interest me. When you overproduce things, or everything sounds too sterile, many modern bands take away all the dynamics and atmosphere within their music. In the end music is about feeling and emotion- when you take away the dynamics and reverberations, the atmosphere you are pretty screwed if you ask me.

Dead Rhetoric: How would you describe Enforcer in a live setting? What have been some of your favorite touring memories to date? What places are you looking forward to playing that you haven’t yet in support of this new album?

Wikstrand: The idea of the live shows is to push every possible limit. Taking things as far as possible in every aspect. We’ve been doing so many shows through the years. Both great shows and really, really bad shows. The bad shows come in a slower frequency now, which I must say is a good sign. Every time you go away it’s a big adventure.

Dead Rhetoric: Where do you view the state of metal across the globe in 2015? What improvements do you think need to be made to ensure the longevity of the movement?

Wikstrand: Actually to be quite honest with you, I see a couple of bands that I really like overall. It’s the same sort of climate to me as when I started with Enforcer. Trends have changed a little bit, but it’s nothing that I’m particularly fond of. You see more teenagers that are into metal as fans and that’s really cool to see, to see a new generation of metalheads growing up right now. Particularly in the past 2-3 years, it makes me happy to see this growth.

Dead Rhetoric: Is being a metal musician all that you expected it to be? How do you handle the rigors of the road and keep your voice in shape – any special warm up exercises or techniques so that you don’t blow out your pipes?

Wikstrand: That’s also two questions in one. I never expected anything and this band is powered by passion and nothing else but the music. Everything else is a bonus, and the bad things don’t really touch you. About my voice, the best thing I can do is use it as much as possible. Like I said before, when we first started I could only sing 3 or 4 songs before my voice was screwed, so we had to play the most important songs first. I managed to practice more, I don’t believe in warm-up exercises.

Dead Rhetoric: If you could back in time and witness any band from any particular tour/album period, which band(s) would you choose and please explain why?

Wikstrand: So much that I would have liked to see. It would be cool to see the Scorpions in 1978, Metallica in 1982. All of your favorites in their prime era, that is what you would like to see. Everyone talks about this prime era- it’s so much fantasy so it had to be incredible. When I was a kid growing up I was wishing I was born like 20 years earlier so I had the chance to see my favorite bands before all of my favorite bands were of course reformed. Right now I don’t think like that anymore- I’m pretty proud to be born in these times and being a part of some sort of movement, bringing the real metal back on the map I guess. It’s been so dead, I mean look at the late 1990’s. When I was a teenager, metal didn’t exist for real. Now it’s coming back, and it’s cool to be a part of.

Dead Rhetoric: I remember reading on your Facebook page that you have plans to come back over to North America in early 2016, what memories do you have of your first tour here in 2009 with Cauldron? A friend of mine on our staff told me about a great show he witnessed in a restaurant in Plymouth, NH on that tour…

Wikstrand: Yeah, that was a great show, and a fun show. After all these years, you sort of forget all these setbacks that we had on the tour. We would come to show… a funny thing, in Flagstaff, Arizona, when we got there, the promoter was there in the door with $20 asking us to take it and go. Obviously there was no one there, he got us what he could. We also had great shows, you forget the bad things and they become fun moments. It was the biggest adventure we could have possibly had at that time. We will do a package tour, that’s for sure. Most bands nowadays, it’s incredible hard and there’s a lot of competitions to get crowds. We will team up with some other bands to get the best package we can.

Dead Rhetoric: What does the rest of 2015 look like for Enforcer?

Wikstrand: The plan is…we had a tour that got planned that we just had to cancel in Europe that we were supposed to be on right now. That was a setback, but we moved that into the autumn so that is when the official touring starts. We will do some summer festivals in between and then we are going to try to squeeze in everything else between the European tour and North American tour, we have rough ideas about how things will turn out.