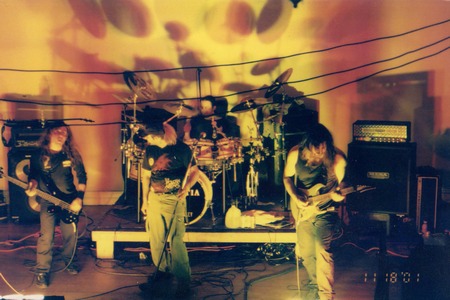 Dead Rhetoric: Roman really showcases a lot of his abilities on this record – not that he wasn’t already a solid guitarist, but just more of his melodic textures and shredding chops. How do you feel about his work on here in comparison to past discography?

Paciolla: He played fantastic. This is definitely his best work to date, and he’s only getting better from here. He had the luxury of time where normally he would go into the studio, when we recorded say Flashpoint or Force, we did those records in a week- and you didn’t have a second chance to go in and do leads. He had one day to do ten guitar solos and he had to live with them. With this, we actually demoed the songs and he had the opportunity to re-write the solos to his liking. If we had recorded the record in 2007 it wouldn’t have sounded half as good as it does now. He’s a tremendous player, he continues to grow and still plays guitar many hours a day. He’s very passionate about his craft of songwriting and playing and writing what he thinks is going to sound best to the listener.

Dead Rhetoric: When looking back stylistically at Enertia, did you ever feel like you were caught between a rock and a hard place because some of your influences were bands that had similar struggles in gaining long term acceptance like Wrathchild America, Metal Church, and Flotsam & Jetsam?

Paciolla: I think we always knew we were in a niche market so to speak. We didn’t want to write music for anybody else than us, though. That never really came into the equation. In 2000 we showcased for Century Media, and Marco (Barbieri) actually told me he had been watching us, we had paid our dues and we were ready. I figured it was going to happen, but it didn’t. We still persevered, and went on regardless of whether or not this label wanted to work with us we were going to do what we wanted to do. Our style… we plugged along with but it never really caught on with the masses, but at the same time we made a lot of friends that are truly diehard fans of our music. That to me means more than having some casual fan that likes us today but a year from now after buying our CD sells it in a garage sale.

Dead Rhetoric: Would you consider Matthew, owner of Divebomb Records, one of those passionate fans as he believed in you enough to re-release the old material and put out this new album?

Paciolla: Absolutely. Matt is a huge music fanatic and he lives for music. He’s a big believer in bands like us and all the other great artists he has on his label. He’s willing to put his money where his mouth is, and keep every single promise he ever makes to a band, help them get their material out to the masses. Even help them see a bit of a financial reward.

Dead Rhetoric: Through the band’s career can you tell us about some of your favorite concerts and festivals Enertia played – and where would you have liked to play if time and money were a non-issue?

Paciolla: I would say my favorites would be Chicago Powerfest in 2000 and then ProgPower Pre-Party USA in Atlanta, GA in 2004. Those are my two favorites that stand out- and a lot of the hometown shows too. I’ll also mention the shows we did in Syracuse, NY from 2005-2007, we played a lot of really memorable and powerful gigs out there. We built a whole new fan base out there of people who had never heard of us until 2005. The second part- I would say maybe playing in Europe. I think everybody has this big misconception that even though metal is huge over there, it’s not like it is mainstream there either. I’ve heard that some of the bands on Century Media are going over there and sometimes playing to less than 100 people a show in some of the cities. It’s not like you are going to be playing a soccer stadium every night that you are over there.

Dead Rhetoric: Is the final album for Enertia- or can we hold out hope for another record down the line? Would you ever consider getting together a final show or two and filming it for DVD purposes?

Paciolla: As much as I would love to put another record together, I don’t know if it will ever be in the cards. I’ve talked about that, and while I don’t think it’s as unlikely to happen as a Beatles reunion- it would take a lot of convincing for everybody to come to the table and do it. All parties are busy with other projects now and most of us view Enertia as something that has seen its better days. As much as I would like to think we could do it, I don’t know if we could make a record as good as this last one without it taking another 10 years.

As far as the live thing goes, that’s definitely more of a possibility. I’ve been pushing for us to do a final show or two for the last three years. Everybody has said that they would do it, but when I put the pressure on them to rehearse it hasn’t come to fruition. Maybe now that the record’s done, there’s more of a possibility. And if we did do that, it would include our old guitar player Dave. We’ve talked about that as well and he said he would play with us.

We spent so much time writing songs- we weren’t the kind of band that could write a song in a night and it would be ready to go. Some of our songs took three or four months to write. We were very passionate about our music, changing really fine details so we were 100% happy. To get everybody to commit to that would be really difficult. 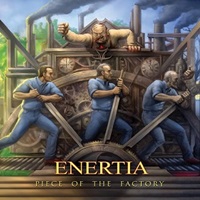