Edguy – Happy Is As Happy Does 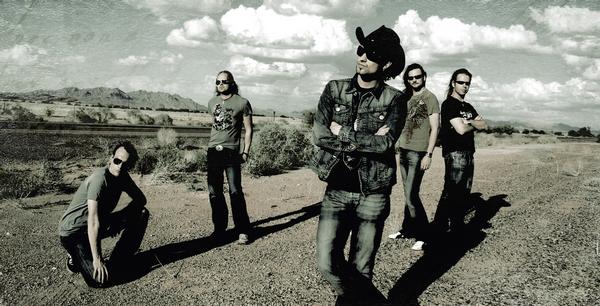 Now the pied-pipers of funny, off-beat power metal, Germany’s Edguy are doing what their forefathers Helloween did when they were in the same situation: they drifted away. No, Edguy isn’t about to produce an album on par with Pink Bubbles Go Ape or Chameleon, two of the most despised albums in German metal history, instead, they’re rocking out, stripping things down, and not being too concerned with how they’re perceived. And yes, that counts the ever-picky power metal contigent who rarely, if ever hesitate to cry foul when a band takes a change in direction.

Their latest is Tinnitus Sanctus and it picks up where 2006’s Rocket Ride left off. Gone are the fancy double-bass anthems that held down the fort for theMandrake and Hellfire Club albums. In their place are mid-paced, song-oriented numbers that emphasize the top-notch songwriting flair of mainman/singer Tobias Sammett. Songs like “Sex Fire Religion,” “Pride of Creation” and the super-syrupy ballad “Thorn Without A Rose” are dripping with hooks and carelessness of a band just looking to have a good time.

The back-half of 2009 poses to be an eventful time for the band, as a major North American tour looms on the horizon, as do preceding festival dates. Plus, Sammett is tied up with Avantasia, a project that threatens to eclipse Edguy, but as we found out from lead guitarist Jens Ludwig, he couldn’t care less about that, or anything else for that matter.

Blistering.com: Two Edguy albums out in the same period of time. Talk about flooding the market, eh?

Jens Ludwig: Our main focus is on the new album, but the Singles compilation was an idea from the record company, but I really like the idea. It’s cool to have this compilation of singles for people who don’t have the [singles] or through more stuff.

Blistering.com: Did anyone tell you what a great song “Spooks in the Attic” is?

Ludwig: [laughs] We’ve only played that one once, at our 15th anniversary in our hometown. We had a two-day concert with Doro as main support, but that was the only time we’ve played it. When we’re doing shows now, we really try to focus on entertaining the people, but unfortunately not very many people outside of Europe and Germany have our singles, so it might be unfamiliar.

Blistering.com: Tinnitus Sanctus is even more stripped-down than Rocket Ride. Was everyone okay with this plan once Tobi laid it out or did it happen naturally?

Ludwig: No, it came naturally. We already started bringing in more 80’s-rock elements on Rocket Ride, but I think looking back, I think that album was too confusing with all of the different directions it went in. We were trying to introduce all of these new elements and it got away from us, but on the new one, I think we kept everything together pretty well.

Blistering.com: Are you trying to distance yourself from power metal?

Ludwig: I think so, too. The thing about power metal, is that we think we’ve done almost everything you can do with it. You can really tell if you’re doing a melodic, fast double-bass song, everything sounds the same. We felt we’ve done a lot of these songs before…these typical, fast power metal songs. We tried to make something new, something interesting for ourselves. We want to enjoy what we’re doing and be satisfied with what we’re putting out. That’s how we came up with Tinnitus Sanctus. I really like the direction of this one because it has the heavy guitar riffs and good melodies.

Blistering.com: Plus, I would imagine they’re fun to play live.

Ludwig: Yes, exactly. At rehearsal for the European tour, a lot of the new songs [sounded like] live, they’ll work pretty well. It’s also a matter of how we do the songwriting. We rehearse a lot as a band, so it’s not like we send the files through the Internet, we sit in our rehearsal room and work on the songs. If the songs good in rehearsal room, you can be pretty sure they’ll work live.