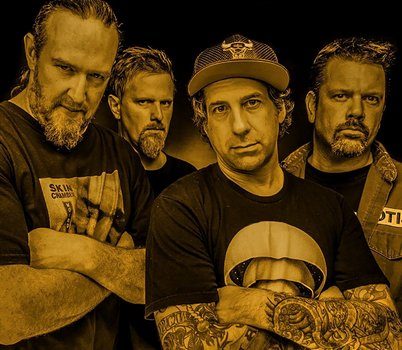 Outlasting the trends and staying true to their craft, Drug Honkey have released 5 albums since their inception back in 1999. Playing a style of music that’s both heavy in terms of the actual death/doom material as well as a noise/industrial edge, they’ve designed a sound that’s distinctively them. It’s also a sound that is a bit eccentric, but one worth diving into for those seeking more originality in their material.

The band’s latest effort, Cloak of Skies, continues the band’s pathway forward. Sludgy doom, industrial effects, psychedelic and horror-esque vibes all come into play. The result is an album that will feel a little uncomfortable at times, and occasionally downright grim. We fired off some questions to get some further information about the band from vocalist/synth and sample master Paul Gillis, who indulged us on all things Drug Honkey.

Dead Rhetoric: There’s so many different pieces involved with your music. How do you like to describe yourselves?

Paul Gillis: The way I see us is Experimental/Atmospheric – Death/Doom.

Dead Rhetoric: Do you find equal footing in influences that are both metallic and electronic/industrial?

Gillis: Good question. Personally, electronic & metal are equally influential. I love both & much of what I create within this band is a direct reflection of that. I’ve been asked which genre I like better, & I don’t have an answer for that.

Dead Rhetoric: Cloak of Skies is your fifth release. Did you set any particular goals for yourselves when you were writing/recording?

Gillis: We never set goals to be honest. Each album is its own beast, & definitely a result of where we’re all at in our lives during the time or writing & recording. If anything there may have been a bit more emphasis this time around on structuring within some of the songs, but really I don’t ever think of it like that. It’s just another step in a natural progression I suppose.

Dead Rhetoric: How much of a role does the atmosphere play in Drug Honkey’s music?

Gillis: An enormous role. Without it, this band would not exist. It is what develops the songs, & keeps things moving. Keeps things interesting & makes you notice.

Dead Rhetoric: Do you find it to be tougher to gain more of an audience with a more unique sound that blends genres?

Gillis: It definitely can be. Our music, as well as our name tend to be love it/hate it in a lot of people’s eyes. & that is totally ok with us. We really aren’t making this style of music to gain access to some commercially viable situation. Everything we have gained over the years has been hard & slow-rolling. When people dig what we do, it’s pretty rewarding, because it’s not your average type of music, & average people aren’t going to get it.

Dead Rhetoric: Has it gotten harder to be noticed over the years with the onset of the Internet and easier access to recording equipment?

Gillis: I don’t think so in our case. We’ve always recorded & produced our own material, so that part is the same. As for the internet, it’s a two way street for sure. Yes, it’s a crazy, flooded place, but it also gains us the luxury to spread ourselves across the globe quite easily which we have done. We have way more fans abroad than we do in our home town.

Dead Rhetoric: There’s a lot going on with the cover art. Any deeper meanings or secrets to discover there?

Gillis: It is quite in-depth. Paolo Girardi did a fantastic job with it. It was a little out of his normal comfort zone, & I actually think that worked to both of our benefits. There are really no secrets other than something that relates to Denmark. I’ll leave that up to a couple of readers to decipher.

We gave Paolo the music to the album, along with the album title, & let him know the jist of what the title means – which is:

“An illusion of clear skies; where everything is wonderful, but underneath the sky is black & the end is near…”

With that info, & the music to listen to as he painted, he came up with the cover. We were very pleased.

Dead Rhetoric: What went into creating the “Pool of Failure” video?

Gillis: Mainly a bunch of time & energy, haha. I do a majority of our videos, & usually I spend a considerable amount of time compiling found footage, or footage I capture/create myself for said videos. I then blend it together with the song to try & capture the feel/vibe of what is going down.

Dead Rhetoric: You don’t see nearly as many remixes as there used to be. What made you decide to give “Pool of Failure” the remix treatment?

Gillis: Personally, it is one of my favorite tracks on the album, & when we decided we wanted to ask [Justin] Broadrick to remix something for us, it just made sense. Also, considering it is the opening track, we thought it would work well with the original & remix starting & finishing the album.

Dead Rhetoric: Drug Honkey has never been a band to follow the “album every two-years” cycle. Does this allow the music to come about more naturally, as well as keep it interesting?

Gillis: Yeah, most of us have families, & full-time jobs, so we’re not at this every day. Once a week we usually get together to work on ideas, talk about things, do some partying, etc… It just takes what it takes. We never worry about stuff like that. This album probably would’ve been done about a year earlier, but there were some rough spells there for a while that slowed things down even more than usual.

Dead Rhetoric: Does the band get to tour much? What can one expect from a live performance?

Gillis: We do not tour often. We play some local gigs here & there, & some one-off shows, or mini-tours out of state here & there, but no extensive touring. We played Roskilde Festival in Denmark in 2014 which was fantastic. I think later this year, or in 2018 we may get a chance to play across seas again. We shall see, as a lot of that stuff is just now developing with the release of the album & the positive feedback.

Dead Rhetoric: You are also involved with Morgue Supplier, among other projects. Do you feel that being involved with other bands helps to satisfy the creative outlets?

Gillis: For sure. I enjoy various styles, & I enjoy being able to explore that. While Morgue Supplier and Drug Honkey are very different in many aspects, there are also some similarities. It’s hard to completely separate between projects, but I think it happens relatively naturally for me.

Dead Rhetoric: What’s Drug Honkey have in store for the next few months?

Gillis: Promoting Cloak of Skies, playing a couple gigs, & enjoying what comes of it… 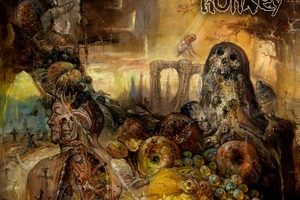