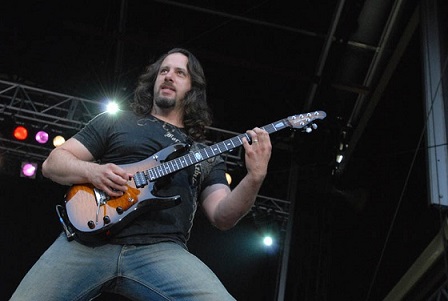 Blistering.com: I just watched the “Life on the Road” video clip you put out, and not like you weren’t before, but the band seems like it’s having a lot more fun and you guys are more loose than ever. Is that how you feel?

Petrucci: We’re a family and when you’re a family that goes through something – and not to be melodramatic – but when you lose a member like when Mike left, it was a big change for us. We had to make some major adjustments. In any situation, if you’re in a family and someone dies or a catastrophe happens, it brings people together. You start to talk more and start to learn about each other a little bit more and you pay attention more. You start to become conscious of certain things and I think because of that process, that it just brought us together. We’re closer because of that. Even the album experience, writing more with James, it was made us more on the same page and more conscious of what’s going on. Sometimes you walk around in the dark a little bit…and I think that’s what you’re seeing.

Blistering.com: How is new Mike putting a spin on the older songs? Is it a different feel or is he keeping it close to how Portnoy played it?

Petrucci: He learned the songs

the way Mike wrote them. He’s starting out with the album versions, to the note. He’s set on doing things that way. We’re playing the album versions with the album tempos. When you’re in a band for a long time, you don’t go back and listen to your songs – you play them live a certain way and make adjustments. The songs are more settled. Having said all of that, at the same time, all it takes is for me to give him a quick glance – he’s always watching what everyone is playing. He’ll throw out some improvised drum thing or a fill. He feeds off the energy, lots of eye contact.

Blistering.com: Were these some of the things you picked up on Mike when you had him in for tryouts? That he can be spontaneous, yet at the same time, he’s totally solid?

Petrucci: One-hundred percent. For him to step into this band and take on the entire catalog, with a band that has been together for this long…not only in the studio environment, but in the live environment, you’re in the warzone [laughs]. You have to be professional. He’s a total rock. He’s never fumbled the ball, ever. He’s also an experienced and gifted drummer and he’s willing to mix things up. I’ve noticed as shows go by he’s more comfortable in the band. I can only assume it must be nerve-wracking for him, the pressure of playing all of this stuff.

Blistering.com: Because Portnoy handled so much of the fan aspect of the band, has that caused the rest of the band to step up in those aspects?

Petrucci: From day one, Mike was great about staying in contact with the fans and getting his face out there, promoting the band. Without him there, you can’t be in the background, you have to step up. Almost immediately, everyone got their Twitter and Facebook accounts, so they’re able to do all of that. We re-designed our entire website, so it’s beautiful and interactive, very cutting-edge. We have more involvement with the record label, trying to do some promotional things like the releasing of the drummer documentary and the snippets of the songs as the album was coming closer. Everyone has stepped up. You come together in the face of something that is challenging, yet it’s not a time to be complacent.

Blistering.com: At least in your case, you’ve always been able to stay in the back and be more behind-the-scenes, so this has to be a huge adjustment, right?

Petrucci: My whole thing, I’m a guitar geek, I love to play guitar and write music. That’s been my strong point since the beginning and I love it. I’ve taken the steps to be more involved and it’s definitely different. It’s cool. It’s really not hard to do, and you get more in-the-know, and you get closer to what people feel and want to hear. It really helps your mental perspective of the whole thing. Our band is a creative outlet and it’s also our career. We’re very invested in it, so we need to all be on the same page to make this successful. It’s all part of that picture. So yeah, it’s been different for me, but also eye-opening, and I’m happy to do it.

Blistering.com: Because you have one of the more devoted and cultish fanbases in metal, I’m curious to see how you were feeling around the time Portnoy left about a year ago. What was it like for you?

Petrucci: First of all, I understood that. If I was a fan of a band and one of the main people left, I’d be upset. You don’t want them to change and you don’t know what the future will hold. I understand. Our fans are very passionate and we’re not a passive listening experience [laughs]. I totally get it. Beyond that, my perspective is “Okay, time to roll up my sleeves. We have a lot of work to do.” Ultimately, with all the drama aside and all the different opinions and posts, the bottom line is that you have to have great music that you believe in. That is what brings people together. That is what made this thing in the first place. That is my focus and that is the band’s focus. It’s how we kept our feet on the ground, even though it’s very easy

to get pulled in. We’re all about the music, first and foremost. I think that kind of focus showed we made the right decision.

Blistering.com: You just mentioned how it’s easy to get pulled in. One of the things I noticed during this process is how you guys kept your mouths shut. Portnoy has been asked about what happened with the band and has said some things, but you’ve kept quiet.

Petrucci: You always gotta stay high-class. Again, it’s about the music and you can’t let other things take away from that. Any sort of business things that happen, it’s not everyone’s business. You don’t know about the personal dealings of certain companies, so why should it be different here? If you have a problem with somebody, you call them up. You don’t need to do that in the online environment. Everyone understands that perfectly well, and it’s just a matter of retaining dignity and class. You don’t want to say anything that you will regret or will be misconstrued. The best thing is to focus on what is important.