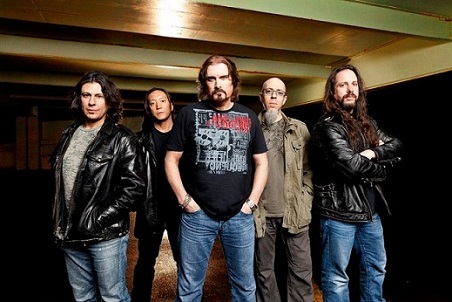 No one bore the brunt of criticism upon Mike Portnoy’s departure from Dream Theater more than John Petrucci. As one-third of the founding core of DT (along with bassist John Myung), Petrucci and Portnoy guided DT to progressive metal/rock stardom, becoming the scene’s most popular band. The division of work was quite simple and obvious: Portnoy was the spokesman, leader, and public “face,” while Petrucci did the grunt-work behind the scenes, responsible for a large portion the band’s music and lyrics. For 25 years, it was how DT ran the ship, so suffice it to say, the loss of Portnoy was one of titanic proportions, with many wondering how the band would soldier on.

This year’s A Dramatic Turn of Events answers a lot of those questions. Retaining many of the metal-on-prog facets they’re renowned for, DT spat another hulking beast of an album, full of adventurous solo trade-offs, Petrucci’s muscular riffs, and James LaBrie’s self-assured vocals. And with new drummer Mike Mangini just getting his feet wet (dude is a technical giant), there hasn’t been that many hiccups as many thought. In fact, Dream Theater may be functioning at its most cohesive level to date.

Calling from his bus in Detroit during the band’s fall North American tour, Petrucci was astute and polite as can be. And rightfully so – he’s now the guy out front, without the net of Portnoy, but is flanked by his band that for the first time, has everyone on an equal level. It’s not a bad place for Petrucci to be in. Amazing how things change in a year…

Blistering.com: This is your first album without Mike Portnoy and first with Mike Mangini, so upon its release, how big of a sigh of relief did you let out?

John Petrucci: With any album, there’s a lot of planning involved, you put a lot of time into [it] and a lot of hard work. It takes for so long for it to come out, so on tour, we had already played some of these songs

live and the fan reaction was right here in front of us, and it has been really great. Sigh of a relief, yeah, and it’s something we’re very proud of and we’re happy to get it out.

Blistering.com: All things considered, this has to be your most important album.

Petrucci:Yeah, absolutely. Definitely important for us. With the lineup change, you have a lot of people looking at the band, looking at what we’ll do next and how we’re going to proceed and whether things are going to be different or better or worse. We’re conscious of that. We approached it that way and made all the right decisions as we went along.

Blistering.com: You already handled a lot of the music and lyrics, but did you feel more pressure than before when writing A Dramatic Turn of Events?

Petrucci: People ask me that and I’m going to say no, only because I put a ton of pressure on myself for every album. A lot of musicians are that way. In my mind, every album is a new beginning, a fresh slate and a new opportunity to put our best foot forward. That itself is pressure. Do you want to take things further? You want to cultivate all of your skills and get better and better. The pressure is always there.

Blistering.com: I think some of James’ work on “Build Me Up, Break Me Down” and “Far From Heaven” is some of his best stuff to date. For someone who has worked with him for so long, where do you see his growth?

Petrucci: I couldn’t agree with you more. I think he really shines on this album. Every decision we made for this album was really thought-out, and we had several conversations about the vocals as in how we were going to approach them. One of things we wanted was to make this a very melodic album. James is a very unique singer and has a beautiful voice and has the ability to sing melodically, so we wanted to take advantage of it. The range that he’s singing in, we were very conscious of that, as to where his voice sits with the songs. At certain points, his voice opens up. That was brought into the occasion.

Rich Chycki in Canada. He would record the vocals, just the two of them, and I think it was a good setting. I kept telling him, “Just be yourself. You’re an amazing singer, don’t worry about what else is out there with those growling guys that think it’s not cool to sing melodically.” I think he really shines. He did an awesome job.

Blistering.com: Would you say James’ contributions are going to be a little more noticeable this time out? Previously, he didn’t contribute as much, so was it important to make sure he was more onboard with everything?

Petrucci: James is not an instrumentalist, so he’s not very actively involved in the writing. It’s mostly me and Jordan [Rudess, keyboards], and John as well. James is there the whole time, singing, coming up with melodies and making suggestions. It was like that on the last few albums, but I think with this one, it was maybe that kind of environment that didn’t require having a drummer there. Maybe it was having the ability to record his vocals in a separate environment where we were. I think the comfort level is there, so I think he felt closer and involved in the process.

Blistering.com: “On the Backs of Angels,” was that the obvious choice from the get-go to be the album’s lead-off track?

Petrucci: It was written that way. I wrote the opening guitar line on an acoustic in my house, thinking how I could open the album. I wanted to do this moody, Pink Floyd-ish, “Welcome to the Machine” vibe. It was initially written that way and it worked.

Blistering.com: You’ve always been more of a metal guy, so are you more prone to let that side out more now? This feels like a metal-oriented album.

Petrucci: I think it’s important to point that out. I think that’s what separates us from early on, from the rest of the prog bands. Even on our first album [When Day and Dream Unite], the core sound that we have as a band, the instrumentation, and the approach we take, is a metal approach. I always said we were like a Metallica-meets-Yes. Our arranging and the way we write music is in a progressive-vein, but the orchestration for the most part, is a metal sound. My guitar sound, in general, 90% of the time, is a high-gain distortion. Coupled that with the drum style, double-bass, everything else, is a metal setting. That’s important and is what separated us out.

Blistering.com: Switching gears, take me back to the first show with Mike Mangini. What was running through your head when you took the stage this past July in Italy with him behind the kit?

Petrucci: It was a big show in Rome, outdoor concert and was a nice night. We knew that being in Rome was good, because the fans in Italy are very passionate and accepting and have been with us for a very long time. We had rehearsed before and had felt we could have used more rehearsal, but nevertheless, and there were some things we were doing differently, like adjusting things we used to do in the past with Mike [Portnoy]. I was a little nervous…looking back while we’re playing and not seeing Mike and seeing new Mike [laughs]. You adjust to it. I remember it being a little strange, but as we anticipated, the Italian crowd was super-supportive and enthusiastic. It was a great night.