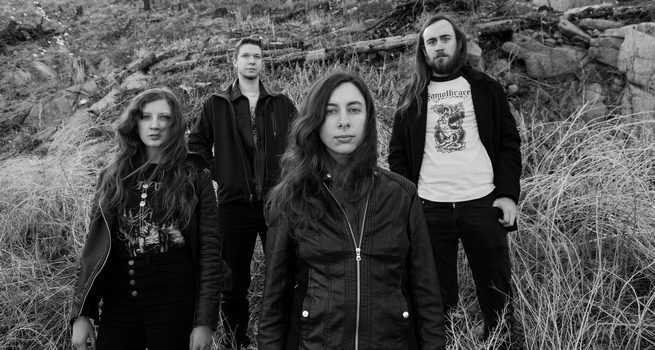 Back in 2013, Dreadnought released their first album, Lifewoven, as an independent entity. It was a striking piece, and one that really bucked an easy classification with their use of non-metal instrumentation and varied influences that span the genre (not to mention their sometimes gargantuan songs themselves). The band has released three more albums since then, culminating in the recent release of their fourth album, Emergence. Their first released for eclectic label Profound Lore Records, but a more than suitable home for a band that defies the norm. We at DR thought it high time for us to chat with the engrossing act, and called up vocalist/guitarist/flute player Kelly Schilling to talk about the band’s growth over four albums, writing longer songs, and much more.

Dead Rhetoric: There’s always boundaries to be broken with your music. What makes you want to continue advancing forward in this way?

Kelly Schilling: We are really just trying to stay true to ourselves and write music that we want to write. We like to challenge ourselves and expand on our technique as musicians as well as songwriters. So I think with each album, we are trying to become better and better composers. We want to make everything flow and be sure it makes sense, but we also want to do something different from our last release; we don’t want to release the same record over and over again, but we also want it to be within our own sound.

Dead Rhetoric: Has there ever been a time where you thought you might be pushing it too far?

Schilling: I think in a way. In the writing process we do throw away a lot of material that we come up with if we feel like it doesn’t mesh well or if it’s too chaotic – anything that we feel doesn’t make sense we don’t use. But I wouldn’t say that on the whole we have crossed that line yet. I think we’ll continue making music for a long time and we’ll see where it goes.

Dead Rhetoric: What are some things that you try to do with longer songs to keep them interesting?

Schilling: We don’t focus too much on the time aspect of it. A lot of times the songs end up being long just because it feels right to us. We usually write pretty linearly where we start out with a basic skeleton, or a few riffs, and we move forward. As everyone puts their parts together, we’ll see where the song is moving and eventually we will come to the point where we feel the song has hit its climax and is moving towards its end. We don’t really time it. I guess I’m happy that we keep it interesting [laughs]; we just kind of write what we feel.

Dead Rhetoric: What added notes do you feel that the flute, mandolin, and saxophone hit in the music? What do they allow you to do that you wouldn’t be able to otherwise?

Schilling: I think it brings in a different mood and timber. Instead of it being just another metal record with guitar, drums, and bass, which is great – there’s nothing wrong with that. But it allows us to add more to the palette. It allows us to make textures that might have a different feeling.

Dead Rhetoric: How did you make the jump over to Profound Lore for this release?

Schilling: We’ve always followed Profound Lore. I remember being a kid when Agalloch was on there and I was really excited. But we have a lot of friends that work with Profound Lore, and I think they always put out really unique material that is all over the spectrum. That’s why we thought we might fit with them really well. We didn’t really get introduced until a few friends sent our last demo to [Chris Bruni]. He ended up liking it. We are really glad to be a part of it since it is such a unique label and Chris is amazing to work with. It’s exactly the level we want to work with right now.

Dead Rhetoric: How you feel that the band has changed along the way with each album?

Dead Rhetoric: What makes Emergence stand out to you?

Schilling: We’ve put a lot more attention towards vocals, as opposed to them being an afterthought on some previous records, so I think it ties it together really well. Emergence is really dramatic. We wanted to capture fire in that sense that it’s devastating and chaotic, but also desolate and necessary for life and growth. I think we were able to use a lot of musical techniques that we have and really put them together into one thing. We have really fast, technical bits but also really soft, somber bits. We tried our best to make them flow.

Dead Rhetoric: Do you ever find any challenges in making those transitions between heavy and melodic?

Schilling: Sometimes, it depends. Usually we can hear how to cadence something so that it really works together well. When we throw away material, sometimes we put two things next to each other and it doesn’t really work, so we come up with a new idea. So there are always challenges in that route, but we are always able to find something that that works.

Dead Rhetoric: Could you discuss a little about the cover art of Emergence?

Schilling: The cover is by Mark Facey; he is amazing. He reached out to us after Lifewoven was out and offered to do art for us. I looked at his portfolio and I was amazed. I’m really glad we got to work with him. When it comes to artwork, we give him all of the lyrics and concepts and let him create a few different ideas off of that. We don’t really guide him with what we want the image to look like. We have a lot of trust in his eye and interpretation of our music.

He described the cover as like a digging to get towards something. In the album, it’s kind of about experiencing a catastrophic event and coming out of it with a multitude of emotions. The cover shows the ‘character’ almost getting towards a greater realm of some sort. The inner art shows the same character with floral patterns off of him, like he is growing or expanding, which formulates transformation.

Dead Rhetoric: The band has been out on the road and touring, what does a live show look like? What sort of bands do you feel are best suited for touring with?

Schilling: We will kind of tour with everyone [laughs]. It’s hard to find a specific crowd because we have a lot of different elements. But we just toured with Monolord and that went really well. We had fans that came out, and we made some as well. We do well in the doom scene. We also do well with any sort of metal scene. When it comes to play with certain bands, of course we want to play with bands and music that we really like, but we can fit onto a lot of different bills.

It’s a good thing, but it also makes it hard to pinpoint us to one thing. It’s a blessing and a curse in way. We can play with anybody and the crowd will be receptive. Just give us a crowd and we are good to go. But it’s hard for promoters to determine who we will fit with. Honestly, if you put us on a bill, we’ll do a good job.

Dead Rhetoric: I saw an old interview where someone in the band said that sometimes they made drawings to write songs. Is this something you still do?

Schilling: That might have been Lauren [Vieira]. I know she has synesthesia and sees a lot in color. She likes to kind of draw based on the colors she sees. But we don’t necessarily draw something and then base a song off of that. That’s more of her personal thing. We don’t normally start with an image, she just sees the music in that way. We also imagine songs in certain colors and you can see that in some of our album art too.

Dead Rhetoric: What can you say about being on the Metal Swim 2 compilation? How did that come about?

Schilling: That came from a contact of Lauren’s. I think it was the artist, Becky Cloonan, who told the curator Laura [Sterritt] about us. Laura reached out to us and liked our music, so she asked us to write a song for it. We wrote that song in two or three weeks and recorded it a week after, so it was a really quick thing.

Dead Rhetoric: In regards to Dreadnought having this kind of unique sound, what do you see as the future of metal?

Schilling: Metal is continuing to evolve and there are a lot of progressive artists involved and people bringing different elements to the music. I think it’s just going to get more and more experimental, but people will still hold onto the traditional elements as well. So there will be more and more art created. I don’t know if I could say an exact direction or genre that it would go, but perhaps more electronic will be brought in – we already see it in stuff like Arcturus and Ulver. Ulver isn’t really a metal band anymore, but I think metal is going to continue bringing those elements in. Modular synthesis is getting really popular, there’s a lot of noise out there, and that’s growing as well.

Dead Rhetoric: What plans do you have once the album releases?

Schilling: We have a tour with Big Brave at the end of June and July. We are playing Austin Terrorfest in early June. After that, we really want to get out to Europe next year, so we are trying to plan to figure that out. Then we are going to write another record. I know we want to make it out to the west coast this year too, so we’ll probably do a short run there too but nothing’s planned yet. 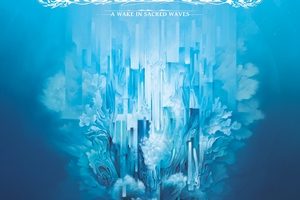 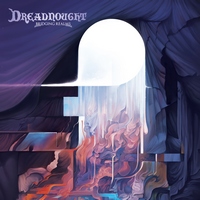