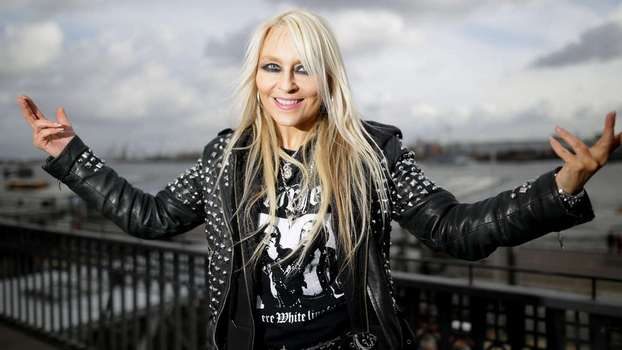 Someone who really needs no introduction, Doro Pesch has had a long and storied career as metal’s queen through decades at this point. While many bands celebrate 10-year milestones, she’s busy celebrating 30-year ones. At the moment, she’s touring the United States in support of Warlock’s Triumph and Agony (yes, a 30-year anniversary). A classic in every sense of the word, it marked a high point for Warlock (before the chaos over the name that then ensued), while metal was still riding high in the mainstream. Making the tour just a little more enticing is that Tommy Bolan, who played guitar on Triumph and Agony, is also going to be along for the ride once more. So there was lots to discuss with the ever-passionate Pesch, whose enthusiasm is infectious. We take a look back at the record in question, the current tour, as well as some recent collaborations she’s been involved with.

Dead Rhetoric: When you look back to Triumph and Agony, what’s the first thing you think of?

Doro Pesch: Great memories – it was the peak time of heavy metal back in ’87 and we were working on the album…it was so exciting. Metal was huge, and I could feel there was a certain magic in the record. Doing the songs – they had more great energy and magic than the last three Warlock records. It was my first time in America and we recorded it in a fantastic studio – Power Station Studio in New York City. We mixed it at Power Station and Kajem Studios…it was mind-blowing. Everyone involved was just so into it. There was a lot of good energy. There were great people that played on the album, Cozy Powell played [drums] on a few songs. Just great people involved. It was such a fantastic time.

When it was done, there were so many people that came to the office of our manager that said they wanted to do a video for this great song [“All We Are”], so we had tons of people writing scripts and stories; Mark Rezyka ended up doing the “All We Are” video, and we did it in Los Angeles. It was my first time going to L.A. and we filmed it in the L.A. river basin and it was a big production. It looked like a movie set! It actually looked like Terminator itself! There were 150 people running around on the set, and it was such a great time. You could tell there was something [special] going on. When it came out [Triumph and Agony], we were so lucky – the right time and the right place. MTV played the “All We Are” video on heavy rotation worldwide. There was so much enthusiasm – big metal magazines did cool stories or reviews or photo sessions. I still love to have something in my hand – we had a big fold-out vinyl record and there was a cut out too – it was actually in the Guinness Book of World Records for the biggest album cover in the world. I think visually, musically, the songs…it was one piece of really great stuff, and you could tell it was more meaningful and more exciting than the records before.

Dead Rhetoric: How much of a setback was it following this high period with Triumph and Agony when you were no longer allowed to use the Warlock moniker?

Pesch: Big time, big time. I didn’t want to let it go. I had to go to court. It was my first time in a courtroom and I was yelling and screaming and got removed from the courtroom. It got so crazy! People who we saw as close friends had suddenly turned into monsters. Someone who was helping us took the name, because it was the merchandising as well. It was awful, and I couldn’t believe that with a little tiny bit of success that people would totally change! I thought everybody was in it for the music and supporting the band…there were many shocks. I would say that Triumph and Agony is one of the highlights of my life, and then the next record, everything started to get really difficult. I couldn’t believe it!

At times I thought about taking the Warlock name anyway, but that didn’t work. We couldn’t. So I thought that maybe do one record and call it Doro, because the record company wasn’t interested in having another band, or another band’s name. We had been really busy building up the Warlock name, and someone had suggested Doro because there was a chance that it would connect with fans and they would know who it was. So I said “okay, we can do it, but later we will change back to Warlock.” But it took like 20 years! It was tough then, and it broke my heart. I know many die-hard fans couldn’t believe it…it was very difficult. But I always wanted to continue making music for the rest of my life. I had made up my mind and wanted to do it no matter what it took. I wanted to hang in and do whatever I could.

I think I was trying to do it in the best way that I could, and it was tough. But then it was even tougher when suddenly metal wasn’t so big anymore, when grunge really took over! It was even harder to deal with, in building the name. All of the foundations – all of the magazines and radio stations, the promoters…the metal scene got smaller and smaller. Grunge grew and grew – that was really tough to survive!

Dead Rhetoric: Tommy Bolan is joining you for these dates – does that make it a little more special to revisit these songs?

Pesch: Yes! Tommy played all of the solos on the Triumph and Agony record, and guitar on the whole album, and we always stayed great friends. We have a good thing going – we had remained friends all through these years and last year I called him up and said, “Tommy, next year is the 30th anniversary of the Triumph and Agony album. Would you like to play some special shows when we only play the album and a few highlights?” He said absolutely – he was immediately involved, I didn’t even have to try to convince him. So now we’ve done two festivals already in Europe – the Sweden Rock Festival, and it was great. We did the Norway Rock Festival and it was awesome too. He is so good – we have three guitar players in the line-up! My guys, Luca and Bas, Tommy Bolan, and Johnny Dee on drums, who has been in the band for 24 years. And Nick Douglas – 27 years in our band. It works like a well-oiled machine I would say.

Dead Rhetoric: You’ve got songs that have been live staples and some that you haven’t played live before with this album. Do you have any personal favorites from the album?

Pesch: From the songs we’ve played before, I’ve always loved “I Rule the Ruins,” “East Meets West,” and “All We Are” – they were some of my favorite songs. I don’t know why we haven’t played some of these songs. There’s a beautiful ballad called “Make Time for Love” – we started rehearsing it now and it’s so nice! It was always in the shadow of “Für immer,” which we played worldwide. We didn’t think that two ballads would fit into the set. But it’s beautiful. “Three Minute Warning” and “Cold, Cold World” we just played in 1988 with the tour in Megadeth in the States and we didn’t play them anymore. “A Kiss of Death” we have never played live…”A Kiss of Death and “Make Time for Love” we have never played live. Many fans have requested them but we didn’t play or rehearse them. But now, since we have three guitars, Luca plays keyboards as well. It’s awesome. “Make Time for Love” needs a nice keyboard; a nice string sound. That’s really working great!

All the songs are dear to me. When Tommy played all the songs exactly like they are on the record, I loved it because it was like when we wrote the songs and thinking about the full melodies and now it’s got the power that it was meant to have. It’s a joy playing with Tommy – he has so much energy. He’s a wild guitar player – sweating and bleeding, running and jumping around, it definitely feels like the ‘80s again!

Dead Rhetoric: You mentioned that you are coming over from the European festivals…what’s it like switching over from these huge festivals to the smaller North American clubs? Is it jarring at all?

Pesch: Every show is a great rock and roll show! I don’t care if there are 10 people or a 10,000. It’s always just a big honor to play in front of people. Certain festivals are really, really special – I love Wacken. It’s one of the best heavy metal festivals in the world…but there are other great heavy metal festivals too. And now playing club shows, you can see the fans right in your face, you can feel their sweat. Sometimes I’ve gotten their sweat in my eyes, but I love it…it’s so heavy metal! That’s why I wanted to be a metalhead and I love it! If a club show is really hot and sweaty and the fans are totally into it and giving it their all – stagediving and stuff, even if it’s not allowed now usually, but people are pretty determined. I love all that wild stuff!

I love every club show and try to give it my best like it could be the last show – heavy metal could get huge or get smaller. Sometimes the smaller clubs and stages make you work even harder and try even harder. Everyone is having the time of their life and you have to compensate for if the light or the PA is not so great. There’s no pyrotechnics or anything – you have to pull out more heart and soul and energy. Now with Tommy, I always hop on his shoulders. We used to do it back in the day and now we are doing it again – we come up with different ideas when you don’t have a lot of stuff [on stage]…and it reminds me more of the beginning, which is so cool as well. I sometimes feel like a new, upcoming star in a band. It keeps your feet on the ground! If you played Wacken every day, it wouldn’t be good for your mind. I don’t expect anything, and what I feel on stage – if people are loving it or singing along, I’m so happy. I get a big kick out of it, and it really doesn’t matter the amount of people, not at all.