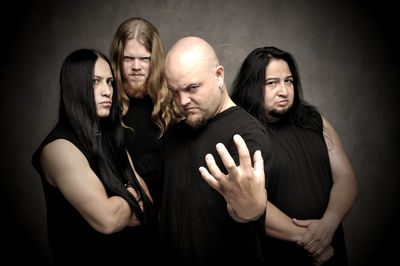 For a man at 41 years of age, Dino Cazares sure has a lot of spunk. Energy. Passion. Confidence. You almost would have to possess those traits if you were trying to promote your new band’s second album and resurrect the band that made your career what it is. And this is what Cazares is up to, circa 2009. Divine Heresy’s new effort, Bringer of Plagues is slated for a late-July release and the now very-public battle over the Fear Factory name is just getting started. Just thinking about enduring one, let alone two makes this scribe dizzy with exhaustion.

One has to think Cazares could only say so much in regards to the Fear Factory tug-of-war, one that pits he and singer Burton C. Bell on one side and drummer Raymond Herrera and bassist Christian Olde Wolbers on the other. You could thank the lawyers for that, but a recent full-on cancellation of a Fear Factory European tour spoke volumes as to how the situation is unfolding. At press time, Bell and Cazares were still teaming up with legendary drummer Gene Hoglan (Death Angel, Death, Strapping Young Lad) and current Fear Factory/former Strapping Young Lad bassist Byron Stroud for a new album.

Then there’s the aforementioned Bringer of Plagues, Divine Heresy’s first outing with new singer Travis Neal, who replaced the unceremoniously dumped Tommy Cummings. It’s mondo extreme and over-the-top, with drum lord Tim Yeung and Cazares locking up for some of the year’s most crazed moments. It makes albums like Digimortal and Transgression seem like child’s play, but we’ll let Cazares explain that rather than us…

Blistering.com: Does the issue with Fear Factory’s name affect what you’re trying to do with Divine Heresy? How much of a distraction is it?

Dino Cazares: It’s not much of a distraction at all, actually. Not much is going on with Fear Factory right now anyway and Divine Heresy is getting ready to shoot a video for “Facebreaker” and we’re going to be going on tour soon.

Blistering.com: Initially, what was your game plan in terms of splitting up time between the two bands?

Cazares: I’ll shuffle it as much as I possibly can. Sometimes, I’ll try to combine the two, so that means at some point, both bands could be on the road together.

Blistering.com: Are you up for that?

Cazares: Oh yeah.  I’ve done it with my other band, Asesino. We toured throughout South America and Mexico and did some US dates. The most I’ve done is two live sets with 37 songs. It was over two hours worth of music.

Blistering.com: Do you have any idea how long the legal proceedings is going to get drawn out with Fear Factory? Are you worried?

Cazares: I’m not worried about it at all. I’m just working as hard as I possibly can to make sure things are doing good. Burton and I are very focused that we’re doing the best we can. We’re not going to let other things or the stuff you read in the press get in the way of what we’re doing or our creative thinking. That’s just a part of being professional – you don’t let those things bother you. When I go into a room and I rehearse or write with whatever band I’m in, that’s it – I turn my phone off [laughs].

Blistering.com: As for Divine Heresy, it appears to have “upped the ante” with Bringer of Plagues. Was that the goal going into the new album?

Cazares: I think it was a natural progression, a natural goal. We wanted to stay in one little area with Bleed the Fifth and I didn’t know how far…a lot of the stuff was already written before Tim [Yeung] or [bassist] Joe Payne joined the band. It was pre-written, but it wasn’t until jamming with Tim and learning more and more his drum style and influences, that’s naturally what pushed the songs. Joe, the guy came from Nile, so he automatically shreds. Having his influence and having our new singer Travis, all of us collectively writing together, it turned out to be fucking the natural evolution of where the band is.

Blistering.com: What did it take to get Travis’s vocal style to work with what you’re doing?

Cazares: I’m not saying the last record is bad, I think the last record was great, but I thought maybe, musically, it didn’t have the Tim Yeung influence with the shit-blasting. And maybe choosing the last singer we had [Tommy Cummings] was a mistake. I thought the vocals came out great and the record was great, but we knew that we needed to go somewhere else. We wanted to be sure we chose the right guy for the next evolution of Divine Heresy and Travis was that guy. He has a more brutal voice, he fits the style more and he can sing melodic as hell. Travis fit really into what Divine Heresy is doing now.

Some of the vocals on the last record were good, but they were more along the lines of a metalcore thing and it was not what our intentions were. We are happy to progress where we are now and have Travis writing. We knew he was going to fit in. Tim and I had some music written and as soon as Travis came in, we were like, “this is how it’s supposed to sound!”

Blistering.com: This is some of the most melodic material you’ve written. Do you think some will be surprised as to how melodic this album can get?

Cazares: No, because if anyone who has followed my career through the years will know I’ve done some pretty melodic stuff. When I did the Roadrunner All-Stars project, there was the melodic track on there, “The End” and that was with Matt Heafy (Trivium) and that was probably the most commercial thing I’ve written. Doing a song like “Letter to Mother,” it’s not anywhere as near as melodic as “The End.” I’ve always had the element of everything I’ve done, even going back to the Soul Of a New Machine record. It was brutal death metal with melodic vocals.

Blistering.com: To that end, some of your guitar work might be your most intense to date.

Cazares: Definitely. Like I said, it was natural to go to the next level and coming up with ideas like that just came out. I had some songs that were different than what I’ve written before. In the back of my mind, I might hear those comments like, “Oh, Dino is just a one-trick pony.” So it’s like, “Ok, I’m glad I wrote this record” because it will show that it’s the most technical I’ve ever written. The more Tim and I progress and the more the band progresses, we could get even more technical. But, no matter how technical, brutal, or how fast it gets, it’s always going to be catchy.

Blistering.com: Obviously, working with a guy like Tim, there’s no limit to what he can do. Can you compare and contrast his style to say, Raymond’s?

Cazares: [laughs] There’s no comparison at all, whatsoever. It’s like night and day. Tim is like King Kong – you release those fucking chains and he kills it! He’s all over the place, but everything is tight. He puts everything in a strategic place and does it intelligently. When I was with Raymond, I definitely felt I was limited as to where we can go. If you heard a lot of Raymond’s stuff that he’s doing now, it’s the same. Whereas, I feel that jamming with not just Tim Yeung, but jamming with Gene Hoglan, Joey Jordison [Slipknot], Roy Mayorga [Soulfly, Stone Sour], with different drummers that have different styles has definitely helped me as a guitar player. I was able to see there was other killer elements of music I could learn.

When I was jamming with Raymond, I felt very limited and I think a lot of people could see that. Raymond is very good with his snare and his feet, but when it comes to rolls…Kerry King said it best: the guy is not good with his hands. With Tim Yeung, it’s limitless. There’s no comparison and now jamming with the living legend Gene Hoglan, a guy who has inspired every drummer, it’s like, “oh my God! Where else can I go?” My mind is about to explode. These guys are like “try this” [makes machine-gun blasting noise]…I’ve been lucky I’ve been able to jam with some of the best drummers in the business. For me, I’ve always had the connection with drummers. That’s the most important thing for me. Tim and I could probably just go on tour – him and me and I know people would be happy [laughs]. The vocals on top are just icing on the cake. Jamming with guys like Gene…the ideas are limitless; they don’t have one particular style because they’re every style. 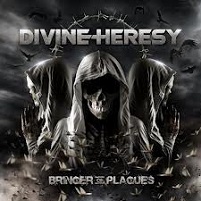