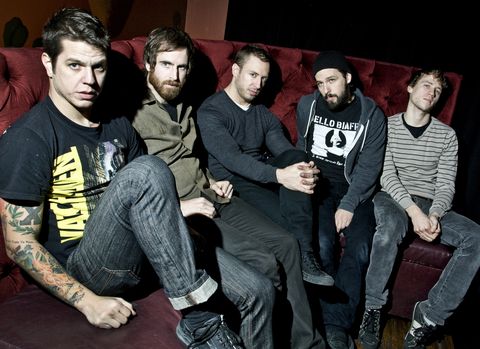 How many times have we read sob stories of bands being screwed over by record companies? Yeah, we can’t keep count either. It’s a cut-throat business, especially now considering how irrelevant record sales are. The music arms race of the 80’s and 90’s is long gone; giant record companies have virtually no sway and pull in today’s music world. And if more bands followed Dillinger Escape Plan’s business model, labels will almost certainly go the way of the dinosaur and better yet, have to totally rethink how they conduct business.

After nearly a decade on Relapse Records, the band set up their own imprint (Party Smasher Inc.) and hooked up with emerging Season of Mist Records for the release of this year’s Option Paralysis. It’s a bold move, one that gave DEP total control over every aspect of their operation, this, after years of having to operate under a traditional record deal. For the band, it’s a worthwhile endeavor. They’re self-managed and have the fanbase to make such a move. Every minute detail regarding Option Paralysis from marketing plans to merch to packaging had to be approved by the band. While it may detract from the creative aspect out of being a musician, it could very well help sustain the band’s always-flighty career path. Younger bands probably couldn’t do this; older ones are either too lazy or stupid to follow.

Now entering a full decade with DEP, singer Greg Puciato phoned Blistering while prepping to head out to the Coachella Festival in California. The man’s bulked-up physique and crazed stage antics are forever a topic of debate, but that wasn’t going to be the focus of our discussion. Rather, we wanted to get to the bottom of this whole “business thing.” It’s fascinating to no end…

Blistering.com: Next time Dillinger gets around to do another album, will it be a traditional release?

Greg Puciato: I don’t think so. You never really know. Right now we’re starting to scratch the tip of the iceberg on what we’re going to do next. Everything has been focused around this record for the last year. We just put it out a few weeks ago, so we’re a little fried about talking the business end of things. We need a break to go on tour and play some songs and not think about formats.

I am completely aware that CD is heading toward irrelevance. I’m not one of those people that think you should hang on and try to sell

CD’s. It’s like trying to bail water off the Titanic. At its absolute essence, all a CD is boarding a digital file and there’s no need to do that anymore since you can get the file right off your computer. I still think a CD is cool for packaging and art, but I don’t understand why anyone would buy those things, unless they’re limited. I think that’s what we’re leaning toward. Not eliminating CD’s, but let’s do everything: let’s have there be a free MP3 online, a high-quality download, maybe a CD where there’s only 5,000 of them and make them $30 bucks as opposed to $15. So we’re they’re sold-out, people will know they’re not sitting on the shelf forever and will always be there. Something that has value will be around forever.

Blistering.com: When you didn’t renew your deal with Relapse, was it a breath of fresh air? Like, we can really stretch out our wings now since we’re not under a conventional deal?

Puciato: It’s the best thing ever. It’s not because Relapse were so bad; I think conventional record labels are great for baby bands – you have to have training wheels before you can ride alone. We were on that label for a really long time. We took forever to write the records that would fulfil our contract and in those ten years, we were self-managed, made a ton of big decisions and a ton of mistakes, and we felt the constraints of having to answer to other people. We all view the business by the band – we say this is much as a part of it as the creative part, the actual music. To always have a constraint, it was frustrating, so by not being in that position, we freed ourselves up creatively as well. It does feel like the sky is the limit as to what we can do.

Blistering.com: Was there anything in particular that drew you to Season of Mist for this album?

Puciato: It came down to the fact that we got offers from a lot of labels ranging from very weird, forward-thinking, strange deals that didn’t even make sense to us and some things that were very traditional. We had a specific thing in mind – we wanted to sign a one-album deal

. We wanted to have complete control of not just the record, but we wanted complete control over every marketing dollar…everything. So basically, we didn’t want them to have any say at all. We wanted them to agree to be financial backer and distributor. It’s extremely lop-sided and the label would have to trust in our vision. There was always some string attached with everybody except for them. Everything we threw at them, no matter how absurd, whether we wanted to do a crazy box set or have every single territory broken up where we have a different publicist for that territory, they were just like, “Yeah, that’s fine.” And to realize that at end of it, that since we signed a one-album deal and we’d be free of our contract is just really absurd. For someone that’s used to dealing with traditional contracts, it sounds like a horrible idea, but we’ve been around for a really long time. If someone doesn’t trust us at this point considering where we’ve gotten, only making decisions on our own anyway, what’s the point of working with them? At this point, they’ve already recouped everything. It’s been extremely positive question.

Blistering.com: Last business-related question: when you joined band, did you have any clue how deep into this side of things you would get?

Puciato: Not at all and it’s funny because none of us went to business school or anything. I have friends

that have gone to school for some type of business and some type of marketing and honestly, there’s things I could tell about it that you can’t get unless you have some type of hands-on experience with it. We’ve been running our own company for almost a decade and you learn on the fly. We made a lot of mistakes and had a hard time financially for the first four or five years in the band, but it has paid off. We know where every single penny goes from the start of that penny to the end of that penny in our band. There’s no single thing that could get by us and we’ve streamlined the whole thing to just a few people. Bands make the mistake of getting bloated early and have hanger-ons that take 10 or 15% from everything and they’re left with nothing. Bands will be first people to complain that, “We sold these records, we did these tours and still don’t have money.” Well, that’s because you have 15 people working for you that take your money.