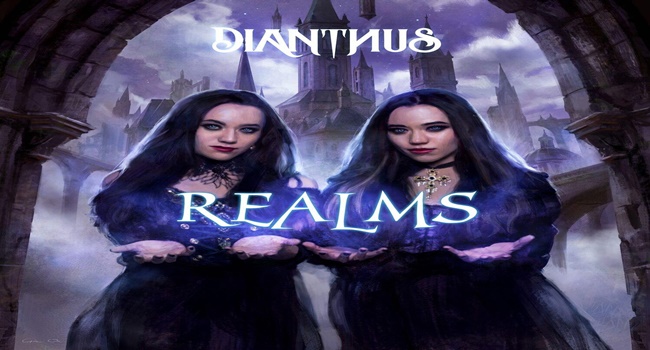 Combining a love of progressive rock and metal influences, Dianthus consists of an adept duo of female musicians who also happen to be twin sisters. Jackie Perry handles guitars, main vocals, piano and bass duties while Jessica plays the drums, adds additional piano and vocal support. Their second album Realms contains an entertaining mix of influences, very much balancing a progressive side with alternative rock/metal aspects, and yet maintaining proper melodies and hooks throughout. We reached out to both sisters on Zoom recently to give us insight into the latest record, working with producer Steve Evetts, thoughts on tackling social media, challenges being taken seriously as twin female musicians in the rock/metal scene, plus important bands that shape their outlook on their songwriting and style.

Dead Rhetoric: Realms is the second album for Dianthus. Where do you see the major differences in terms of songwriting, recording, production, and approach to this set of material versus your 2020 debut album Worth Living For?

Jessica Perry: It’s definitely sonically different. Realms was recorded with a click track; we had the songs more organized. There was more time that went into the album. It’s definitely more mature in terms of our songwriting, and experimental with the material too.

Dead Rhetoric: What was it like working with seasoned producer Steve Evetts – who has experience producing and recording everyone from Sepultura and Warbringer, DevilDriver to Symphony X among others? Were there specific areas that he keyed in on that you were able to notice big differences in the end?

Jackie Perry: I think Steve really helped us to stay organized with our music. Coming into the studio we had a lot of ideas, he helped us reorganize everything to make the songs sound the best that they can, while holding our vision and holding the sound down. He helped us a lot because of that experience previously with those bands too.

Dead Rhetoric: When it comes to the two of you as instrumentalists, Jackie you cover a lot playing guitar, bass, keyboards – what instruments came easy to you both at first? Do you feel like you are stronger at one instrument versus another?

Dead Rhetoric: Is it a challenge to keep up with the vocals and harmony aspects along with playing your instruments, especially in a live setting?

Jackie: Definitely. The vocals are very demanding too, we are aware of how important the vocals are and how you have to bring that energy, making sure that we warm up.

Dead Rhetoric: Were there any songs on Realms that took on the greatest transformation from the initial idea to the final output?

Jessica: There are a few tracks that started out very ornamental, lots of orchestration – and having that extra set of ears with Steve, certain songs changed. In particular “A Space in the Silence” – the chorus actually had a lot more going on with the drums, and thanks to Steve we were actually able to capture the simplicity of that.

Dead Rhetoric: You mention in the press release that are plans to explore the Realms storyline in a comic book and other mediums. How did these collaborations take place, and do you believe it aids the outside appeal to touch in other ‘realms’ so to speak beyond the music?

Jackie: As far as the other promotional mediums including the comic book, that idea was brought up by our record label Deko. If we are able to put music and that vision together, we feel like we can reach out to more of the masses. It’s a concept album, so we figured it would be great to bring these extra visuals out, in that extra platform.

Dead Rhetoric: How do you as musicians handle the ever-evolving landscape of today’s music industry – where social media, instant technology, streaming services, etc. play just as important of a role in building the brand of the band as the songs, records, and live performances?

Jessica: It’s definitely important to be a jack of all trades so to speak. There’s a lot going on with being an artist these days. You have to know how to do everything, making your own content. It’s very important for us to be able to adapt to these changing times. It helps us too, because as a duo we can end up doing a lot more. You have that edge on top of the other bands. We share the workload.

Dead Rhetoric: How do you feel about Deko Entertainment as a record label so far – do they understand what you are trying to achieve with your music?

Jackie: We absolutely love Deko. It’s been a joy to work with them. We’ve been working with them for a couple of years now and it’s been wonderful. They don’t push us into any direction that we don’t feel comfortable going in. We are always doing our own things. They share our vision and our freedom with our music.

Dead Rhetoric: Sharing twin synergy with your sister – can you think of a specific moment or two in your musical journey where that aspect came to fruition? And how have you handled setbacks and failures that come up in this band?

Jessica: That’s a great question. There have definitely been moments where we share that twin synergy. Especially when it comes to the songwriting, that’s definitely something that I think about. It’s a collaboration. We are twins, we often finish each other’s sentences. It’s no different with the music. When I come up with drum parts, it’s a certain way and she knows how to add the right melodies and her guitar on top of it.

Jackie: As far as setbacks and failures, we handle it pretty well, whether it be shows being postponed or cancelled, we try to find a different way of keeping the momentum going. Instead of just feeling like we were stuck at home, we started posting more videos and clips to keep up engagement. It’s great that the world is opening up again. It will be so great to perform live and see people face to face again.

Dead Rhetoric: How do you define progressive music? And how do you maintain a balance in your songwriting between the intricacy and technicality while also constructing hooks, groove, and emotion through the compositions?

Jessica: That is a challenge to find that balance in the progressive genre. Being a drummer in progressive rock and progressive metal, I think of the genre in different tempo changes and odd time signatures. I would define this genre as a challenging way to write music. A good way to tell stories with different tempos. We like to surprise the listener, throw different elements at them. Like we said earlier, we do work together with everything – Jackie will be in charge of most of the melodies. If we are ever stuck on an idea, I can play piano too to come up with melodies too.

Jackie: Even though I don’t play drums, I still help her out sometimes with ideas that I am hearing.

Dead Rhetoric: What do you consider some of the greatest challenges Dianthus faces in establishing yourselves in the scene now two albums into your career?

Jessica: Yes, there are a number of challenges that we face, especially navigating the metal community. We want to present ourselves with a positive impact as musicians, and there aren’t as many females in metal so there will always be challenges there. Some people for instance have a hard time believing that we actually can play our instruments. It’s something that we come across, and we have to prove to them that we can.

Jackie: A lot of people think that because we are twins, we are using that (aspect) as a gimmick. There’s passion behind this, and the music comes first.

Dead Rhetoric: What were some of your first memories discovering heavy metal music or progressive music? At what point did you decide you wanted to pick up instruments and start performing?

Jackie: At age twelve or maybe fourteen, we were able to join the Rock School and play with kids our own age. It was mind-blowing to us to see kids up there on the stage. Seeing kids our age doing that, it was inspiring.

Dead Rhetoric: How important has the support of your family and friends been on your path to establishing yourselves in your music career?

Jessica: Our family has always been there. They come to our shows, it’s always great to see them. And they also support us on social media as well. Our mom and dad, so far, they have not missed a show. Our dad is always helping us with the gear. It’s great to have their support.

Jackie: We are still trying to get them used to the metal thing though! (laughs). It’s definitely a mixture of friends too there as well.

Dead Rhetoric: What do you consider three of the most important bands that shape your views and outlook on music, and what’s the best concert memory you have purely attending the show as an audience member – and what made that so special to you?

Jessica: When we were trying to figure out this band thing, around high school we saw a show at the Troubadour, it was a band by the name of Cherry Bomb. They were an all-girl rock band, we were watching the musicians being so animated, just rocking out. I was very reserved at the time, and it helped bring me out of my shell.

Jackie: I would say Rush would be the band that introduced us to the progressive elements of music. And then Metallica was the first heaviness in a band that we would be exposed to.

Jessica: And then Tool.

Dead Rhetoric: What’s on the agenda for Dianthus over the next twelve months? Will you be making any special guest appearances on other records or live appearances that are on the horizon?

Jessica: Yes, we want to do some collaborating with other musicians on our label Deko Entertainment. They pitched the idea to us; they have a lot of great artists on the label.

Jackie: We do have a couple of shows coming up in the month of June, with the band Angel. They are on the same label as us. On June 10th we will be playing with Angel at the Whiskey a Go Go, and the day before supporting Angel in Las Vegas.