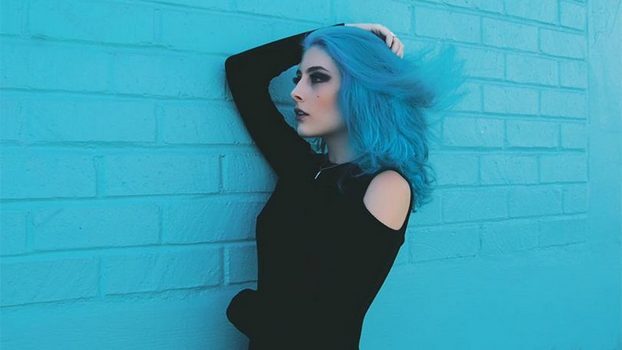 An artist that seems destined to be crossing over into the larger realms outside rock/metal in the very near future, Diamante has an intriguing blend of sounds on her debut album, Coming in Hot. There’s some clear ‘80s influences (an era that she has a particular reverence for) in the metallic side of things, but it’s also expansive and hits marks that go well into rock, pop, and even electronic zones. A collision of things that are both old and new, presented in a way that should appeal to fans of all ages and genres. She has also gained some attention for a recent duet with Bad Wolves on the song “Hear Me Now,” something that no doubt propel more fans in her direction. We caught up with Diamante on an off-tour night in Poughkeepsie, NY to talk about her musical background, aspirations, blue hair, and much more.

Dead Rhetoric: What is your musical background, because from what I’ve read, it sounds like it goes back a ways.

Diamante: I’ve been obsessed with music and singing since I was a kid. All I would do in my room is lock myself up and sing for hours and hours. When I was 10, I did a musical theater production with my school. I was Sandy in Grease, and it was the first time I that I was on a stage, singing in front of a crowd of people. That’s where I initially fell in love with being on stage. I kept doing musical theater for a little bit, but when I was 13, my family and I moved to LA. From there I started actually writing with producers and putting out original music. When I was 14-15, I started plays shows at The Whiskey and The Roxy on the Sunset Strip. So it’s been a long time, but music has always been a huge part of my life.

Dead Rhetoric: With exposure to those two venues you just mentioned, does that have a part in some of your ‘80s-inspired sound?

Diamante: Yeah, I’m so fascinated by the ‘80s and that era of music. I feel a deep connection to it, which is so weird since I wasn’t even alive during that era. There’s something about it to me that’s just so magical. I think definitely the fact that I was playing on the Sunset Strip at 15 at these iconic venues had something to do with it.

Dead Rhetoric: For this album, you worked with a number of different writers. Do you feel that you found your own sound through working with so many different people?

Diamante: Totally. That’s why this writing process, even though it was so super grueling and difficult, it was worth it because I got to write with all these different people over a period of time. I picked up on a lot of their tricks. I listened to some of the demos I wrote at the very beginning, as opposed to the songs that made the album, or the very end, and it’s like, “Wow!” I grew immensely as a songwriter. It was cool to work with all these people and learn their tricks.

Dead Rhetoric: What were some of those tricks? What did you learn as you went through the process?

Diamante: I learned that it helps to actually talk – talk about what’s going on at the beginning of a session and really dive into how you are feeling and what you are going through. I realized that I like to write lyric and melody first, to an acoustic guitar, and then build the instrumentation and the track around that. Sometimes I would walk into a session and there would be a fully made track and they’d want to write to that. It would be really difficult for me. I like doing it really stripped down and then building on it.

Dead Rhetoric: In having the process take a few years, do you feel you’ve kind of grown up while recording?

Diamante: Yeah, I’ve definitely grown up! I was 19 when I started writing the album and I’m 21 now. So this album is kind of a coming of age album. It tells my life, transitioning from teenager to adult. I went through so much in the writing process – you can really tell the time difference.

Dead Rhetoric: In terms of your own sound, there’s some of it that’s pulling from the ‘80s but it’s definitely not like you are a retro act. What do you feel that you pull from there, that you add? There’s also pop and metal elements in there as well.

Diamante: When I spoke with Howard Benson, who produced the album, he knows how much I love the ‘80s and that retro feel. He also made it very important that while it had those elements, it also sounded like an album that was made in 2017-18. There’s a lot of guitar licks and leads that are super ‘80s and retro, and a lot of the melodies are very retro. But we added in these modern sound effects to bring it to the future. More of the alternative elements give it a contemporary feel – you have synths and stuff like that, with the metal guitars so it’s a cool counterbalance.

Dead Rhetoric: You have the “Hear Me Now” track with Bad Wolves, and you are going to be going out with them this summer just to sing in that one song. Does it put some added pressure on you to make sure you are at 110% each night?

Diamante: Totally! I did the same thing back in May when they were out with Five Finger Death Punch and Shinedown, and I remember telling them that it was so much more nerve-racking. In this tour, I have a 30-minute set and I get to go out there and headbang. But “Hear Me Now” is more of a love song, and it’s slower. I get 3-minutes and that’s it. You have to leave an impression. There’s more pressure, but all I have to do is worry about one song. The rest is just touring.

Dead Rhetoric: You weren’t involved with writing “Hear Me Now” but you have some more ballad-y songs on the album. What’s the difference when you write something more tough and aggressive versus something more vulnerable?

Diamante: It’s so much easier for me to write the tough and aggressive stuff! That comes naturally to me; I can do it no problem. Writing from a vulnerable place is a lot more difficult for me. It’s also something that Howard really pushed me to do, because before the album came out I had put out singles that were very aggressive and in your face. While that is a side of me, it wasn’t a multi-dimensional view of who I am. I wanted to incorporate those into the album, so I had to stop being afraid and put my insecurities and vulnerabilities out on the table and write about them. I’m glad I did, because I think Coming in Hot has this cool duality about it.

Dead Rhetoric: Being that you did do the one big collaboration with Bad Wolves, do you find that people are coming to you because of “Hear Me Now?”

Diamante: Yeah, especially because of this tour, as I’m out with Bad Wolves. A lot of people tell me that they discovered me because of “Hear Me Now” and then they listened to my music and loved it. It was cool introduction for a lot of people.

Dead Rhetoric: Knowing that you’ve got plenty of time in your future, who would you like to do a future collaboration with, if you were given the option?

Diamante: My all-time dream collaboration would be with Joan Jett, because she’s my idol and I’ve always looked up to her. It would be insane to do. Another one that would be cool for me would be Rob Zombie or Marilyn Manson. They would provide a good duet.

Dead Rhetoric: So what are your goals – where would you like to project yourself, since this is your first album?

Diamante: My goals are just to tour the world. That’s all I want to do. I want to be on the road forever! The goal would be to play bigger and bigger shows. In five years from now, if I’m in arenas, that means that I have done everything that I want to do, because that’s where I see myself.

Dead Rhetoric: There was an EP that came out a few years ago. It kind of vanished?

Diamante: [Laughs] Yeah, it did kind of vanish. It was called Dirty Blonde and I put it out when I was 17. I put it out when I was independent, and when I signed to Eleven Seven, they wanted a fresh start. If you really dig for it, you can find it online. There’s live videos and stuff, as well as the video for “Bite Your Kiss.” But for the most part, we wanted to start from scratch.

Dead Rhetoric: So tell us about your blue hair…

Diamante: If I’m being honest, I have really cool deep reasons now, but I was so tired of being blonde. I was bored. I was a platinum blonde for a while and I started noticing that everyone was kind of platinum blonde right now [laughs]. The upkeep was annoying, so I decided to do something different. I went back to my girl in LA that does hair and I walked in and asked what colors she had. There was purple and turquoise blue. So I went with blue. It was very on the spot – I didn’t ask anyone’s permission. I just kind of did it. Then I thought about it, and blue has always been one of my favorite colors. My name, Diamante, means diamond. Diamonds are blue, to me anyway. My middle name, Azzura, means blue in Italian. So it just works, and it’s very on-brand. I’ve had it since 2016, so it’s stuck around for a while!

Dead Rhetoric: It’s a sad thing in today’s society that something superficial like hair color, can be viewed a certain way. But if you can make it work in your favor, it helps to build that brand association.

Diamante: Exactly. I love colors and stuff like that. My mom was an interior designer, and after that she did marketing for artists and I learned a lot from her with that.

Dead Rhetoric: I just hope you are okay with having blue hair for a while!

Diamante: [Laughs] It was so funny, my label was like, “Are you tired of the blue hair yet?” I said no, and they were like, “Good, because it has to stay this way until the end of the album cycle!”

Dead Rhetoric: So if you had to shift from blue, what’s next?

Diamante: People have had that idea too – maybe with each album it’s a different color. I never know beforehand. I just feel it and start gravitating towards a color. I love red too. I did red when I was 15, it was cool. I don’t know, I guess we’ll find out [laughs]!

Dead Rhetoric: You are going on tour with Bad Wolves this summer, what’s next after that?

Diamante: The goal is just to tour as much as possible. Nothing is in the books yet, but it would be really cool to go to Europe. At least for me, personally. 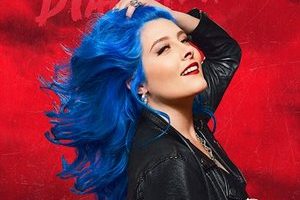