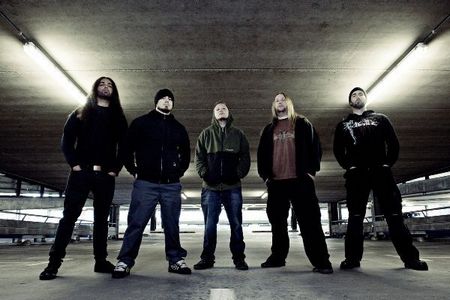 Dead Rhetoric: We all know who the big 4 of thrash are worldwide – and the big 3 of your own domestic Teutonic thrash scene. Who would you consider slotting in next across the globe as 4 of the best/more underrated thrash bands that fans need to dig deeper into and seek out their albums?

Jensen: Oh wow, that is a good one. I would say…it’s not a brand new generation but a younger generation that wasn’t around in the 80’s. Somehow the non-80’s thrash bands will never break as big as the old ones. There are three generations out there on the market, in a way almost competing for the same amount of listeners. But if you listen to some of the newer thrash like Vektor, Warbringer from California is a great band. Bands like those would be the next generation- look out for newer acts that you should go check out.

An underrated type of big four, I would say Sacrifice would be number one on my list, Dead Brain Cells would be in there, Voivod for the early stuff, and then Demolition Hammer. They were so tight. Exhorder I probably should name as well- this was all 20 years ago and some of these bands have split up for good or for an important reason. It would be cool if people started appreciating the newer bands some more and give them a break as well. This music style is very much still alive and kicking. Not only because of the big names.

Dead Rhetoric: I read in a previous interview that you are also a Tori Amos fan – seems like a lot of people in the metal field appreciate her work…what are some of your favorite memories surrounding her concerts or discography?

Jensen: I don’t know why she was so special. Around Little Earthquakes getting released, a friend of mine turned me on to her music. I thought her albums were revolutionary for how the state of rock and pop was around that time. The records haven’t lost any of their appeal, just last month they had an anniversary release and I picked up the vinyl again. The music hasn’t lost any of the magic, I think she’s great. Outstanding voice, a little bit of that Kate Bush thing with a more contemporary vibe. I sort of lost her along the way, some of the later records were a bit too artsy for me. I understand they were very personal so maybe I just didn’t connect as well to them, but casually I am still into her and the last chance I got to see her in concert was a couple of years ago and she was fantastic. Still a great performer. There is a song on her latest record that she does together with her daughter, a duet that is fantastic and probably the best song on her last record. Eventually she’ll be able to do another great album, I think she is a limitless artist.

Dead Rhetoric: What more do you hope to accomplish with Dew-Scented down the line?

Jensen: Yeah – we want to get on that list of top five thrash bands! (laughs) No, I don’t know. There will still be a couple of really cool bands that I can imagine ourselves to be touring with to reach new audiences. I went to see Metallica on Friday at the local festival around here – I saw Meshuggah, Gojira, Exodus, Metallica on the same day and it was great. A lot of these bands I’ve been listening to for 20 years or more, they are still here kicking ass. I don’t know what their goals or ambitions are but maybe they are just trying to move forward. That’s what we are trying to do to stay relevant. We consider ourselves fans of the music and fans of the style, we aren’t unhappy about still being around, and that is enough. I can’t have more expectations than that to be honest.

Dead Rhetoric: Speaking fluent English, German, and Spanish, how does your language proficiency aid the band when it comes to travel and interviews?

Jensen: A lot. Languages connect people. It’s great to be able to have some conversations this way. I wish I could speak more languages because there are so many more, I just got stuck with those. I have some French happening as well, it’s not as fluent so I don’t think I could go through a full interview without saying something retarded. Personally I like the fact that it helps you open doors and communicate. Especially when you are traveling on holidays and you go to more remote places or maybe there is no good way to connect other than through language. I was raised with Spanish, but I moved to Germany, and it’s good to have other options. For interviews, English is the international language, I’ve never tried to write a lyric in German or Spanish…and I probably won’t do that. It’s fun and keeps things interesting.

Dead Rhetoric: What does the rest of 2015 look like for Dew Scented, are you guys going to be doing a lot of festivals and touring?

Jensen: We are releasing the album in June, we are doing a string of 10 days for concerts in June to support the album’s release. We are supporting Exodus and Cavalera Conspiracy on a couple of shows in Germany which will be really good to set up the record release. In October we have a tour package together with Angelus Apatrida from Spain and No Return from France, which are very like-minded bands and great live acts, so that’s why we choose that package. It’s going to be a three week run in October, apart from that we are looking into as many options as possible to play out. Hopefully internationally, we will hopefully come back to North America as well, it’s been a couple of years already and we would love to come back, reconnect and keep the record visible. I just want people to know that we have a record out and check it out, whether they like it or not that’s not a concern for me.