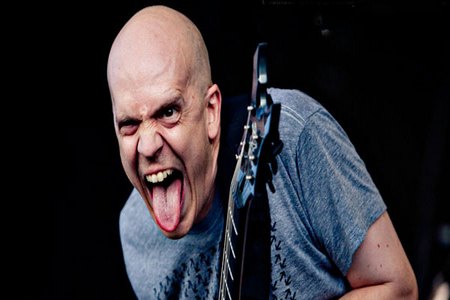 Dead Rhetoric: You mentioned the crowdfunding. It seems you’ve always been your own worst enemy in terms of critiquing your own music. With the crowdfunding being such a massive success, did it change any of your own thoughts, on where you are musically?

Townsend: Yeah, it made me realize that I need to change. Or maybe that’s just where I’m at now. I think a lot of what the crowdfunding thing did, is that I spent a great deal of time, and admittedly effort, assuming that no one pays attention and no one listens. It made it easier for me. In a sense, it removes the accountability of it; I’m just doing it for myself. After the crowdfunding, [I realized] there were a lot of people, and a lot of people have an emotional investment in me apparently. You are struck with this newfound awareness that there are people participating. It’s a new element to the process that has previously, not consciously at least in the front of my mind, been present. There’s people with Ziltoid tattoos, people saying, “Hey here’s my two year old kid listening to Ziltoid,” there’s this and there’s that and I was like “Oh my God,” for a while there, “No one talk to me because it’s going to screw me up.” I’m going to stop writing the way that I do, and write in the way that people expect. So that was definitely a challenge.

Ultimately, there’s an element of me being pensive on the new Ziltoid record in that there’s a bunch of things on Z2 that if you’ve listened to my music, you’ve heard it before. It’s the same sort of patterns and procedures with slightly different techniques. But it’s the same kind of idea. So I think that in a sense, I played it safe, but in another sense, I didn’t play it safe because I still did what I wanted to do in that musical sphere. So I did it, and perhaps part of me is saying, you kind of have to fight through it. It’s hard for me to accept compliments from people, it’s hard for me to really accept the fact that people really like the music; it’s not easy to do that for some reason. In some ways, it’s just as hard as [dealing with] someone who thinks that everything you do is shit. I’m like, well it isn’t. Some of it is better than others, but it’s not shit. It’s good, I really like it; I think I did a good job. But at the same time, when people say, “This is the best thing ever,” I think to myself, well it isn’t. It’s an accurate representation of a certain part of one person’s experience and it’s just that. I feel like I kinda lost my footing in the making of Z2 and I like to think I found it again, but not without substantial effort.

Dead Rhetoric: Going along with what you said, in terms of accepting compliments, with everything you’ve done since Ziltoid, does it seem strange that some people do look to you as a role model now?

Townsend: I’m okay with being a role model, because I’ve been doing this for a while. I don’t mean that in an arrogant sense. But realistically, I’ve been doing this for a lot of years and I have a lot of experience so I think I can offer some advice and some perspective, at least on how I’ve experienced it, that I’m happy to share. That comes down to my experience with anything: like extracurricular parts of music, how drugs/booze affected me. Again, it’s all my trip; it’s not like “this is what you should do;” I’m wired in a way that is admittedly a little peculiar. But within that, if people think that I can offer some perspective on something, I think I can as well. It’s certainly not definitive, it’s just a perspective and I’m okay with that.

Dead Rhetoric: You’ve always kept a bit of toilet humor at your side. Do you think that aspect keeps you humble in a way?

Townsend: I think so. It’s probably run its course more than I’d like to admit. But I think a lot of the concepts I’ve explored over the past twenty years with music have been rights of passage type concepts. Thinking about God, infinity, violence, whatever it is. It’s not original thoughts; these are rights of passage for the majority of human beings on the planet, at least from what I can tell. The first time I experience or write about them, it’s probably going to be epic or intense or emotive. I think that to not take some of that [humor], puts you in a position of preaching about it. I don’t know what I’m talking about, I’ve never known. I’m not making statements, I’m making elaborate questions maybe. The childish humor is more based on going “here’s this epic thing that I’ve just experienced and oh my god, it’s blown my mind…and it’s not that important really.” I think that is a pretty good way to approach it for me, because a lot of the things that get thrown at people that do this for a living can go to your head pretty quick.

Dead Rhetoric: It’s like you say, it kind of eases it down and makes it more approachable in a way.

Townsend: Hopefully, and hopefully it’s a bit below the surface. It’s not a parody, because I’m not trying to make everything I do a joke. I’m just trying take these lofty things that life presents to me and most people that I know, and just present it in a way that doesn’t sound like more than you think, “guys I’m really thinking about this right now and it’s a big deal to me but in the long run of it, [it’s not a big deal]. Here’s me being super emotive about something and pulling the rug out underneath it.” For a while I thought it was sort of a self-destructive thing, but I think there is an inherent absurdity to the whole thing that has illustrated well with childish humor. At least it has up to this point; we’ll see where it goes with the future.

Dead Rhetoric: Everything is so over the top, that just kind of blends right into it. It adds a different aspect.

Townsend: Someone dies or someone is born, and a lot of the times you feel like you are the only one that it’s ever happened to. Holy shit that’s intense; I can’t believe how intense that is! But then you look around and it’s going on everywhere; it’s not just me. How do I find a middle ground? Doing what I do, I try to find a way. I don’t know if it’s the most appropriate way or it’s even particularly successful but it’s what’s come out so far.