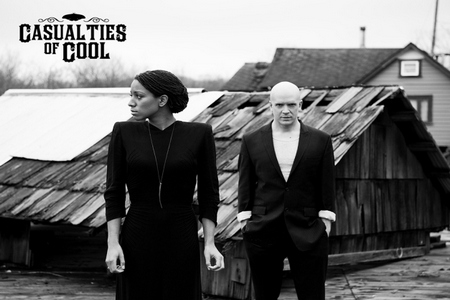 There was a lot of hoopla when Devin Townsend’s Casualties of Cool was announced back in 2014. Despite being a big leap musically (even from the eccentric Townsend), the crowdfunding goals were smashed almost instantly and the album was highly praised by many (including DR) upon release. There’s just no denying the uniqueness or amount of passion that was poured into it. But for those who didn’t get a chance to indulge, Inside Out has you covered, with a re-release of the album coming out in a matter of weeks.

This set the stage for a conversation between DR and Townsend in early December to discuss the new, label-backed version of Casualties of Cool. With something new always on the horizon, there’s plenty to discuss (not to mention Townsend’s always insightful views on life itself). In addition to CoC, we were able to chat about some other upcoming releases (his book, a symphony project, more DTP) as well as his fanbase, taking risks, and how he isn’t quite as perpetually busy as you might be led to believe.

Dead Rhetoric: What made you decide to give Casualties of Cool a label release?

Devin Townsend: I think the fact that I really liked it makes it really important for me that people have the option of hearing it. The things that have come out through Inside Out from me are things that people typically know me for. Because Casualties took many years to make, and because it’s something that I really like – whether or not other people respond to it, like it, or have any interest in it, at least it’s been given a chance. That was important to me.

Dead Rhetoric: With Casualties of Cool, you mentioned how much extra time you had to ‘cook’ on it. Is that something that you are going to try to do more of as you move forward?

Townsend: I’d like to say yes, I’m going to try. But the best laid plans are often derailed by the realities of the industry and career. The one thing that I can put into motion is trying to plan [things out], and trying to limit the amount of things that I’m doing at one time. My neglecting to do either of those things has resulted up to this point in shit loads of work. All the time. Before you know it I am stressed again, by my own hand, and I didn’t really need to if I had just chilled out just six months earlier. I’m trying to implement that now. For example, even though I have a ton of different music and a ton of different projects that I’m excited about, I’m trying to just do DTP right now. Get it done properly. Hopefully during this time, these peripheral ideas that just sort of come to me, I can just catalog. Then I’ll have the same enthusiasm to work on them in due time, as opposed to it all just clogging up the pipes. That’s my hope.

Dead Rhetoric: I know with Z2, you had said there was a lot on your plate at once and it was stressful. But when you are told that you can relax a bit, it seems that you become more creative. Does that sound right?

Townsend: I think so. There’s really a contrary part of my nature that really hates being told to do anything. It’s the same reason why I dislike putting together IKEA furniture – I don’t what to be told what to do. It’s this whole childish thing, but I think its subconscious for me at this point. When no one wants anything from me, it’s when I start going. I hope that the people that are around me have slyly been able to recognize that and thought, “Okay, if he says he doesn’t want to do it, tell him it’s okay and we’ll get what we want.” It’s unfortunate, because it’s such a childish reaction but you play the cards you are dealt right?

Dead Rhetoric: I saw somewhere you had finished the outline for your symphony project. What is your vision for this project?

Townsend: I’ve been told I shouldn’t start thinking about it until December [2016], but between you and me and whoever is reading this, I’ve got so much of it written already. I haven’t taken the step of allowing it to become an actual form, but there’s certainly a trajectory and an aesthetic and a theme. There is an objective in terms of what it is that I want people to feel once the music on the album is finished. So you put all those things together and currently in my mind, I call it “The Moth.” It’s this big, desperate jumble of information so far. If someone told me tomorrow to start thinking about it, I’d have a much clearer answer about it, but currently it’s just a bag of stuff.

Dead Rhetoric: I know you are constantly busy with things – you have a book coming on the way too, how much progress has been made at this point?

Townsend: Oh, it’s done. Here’s another way to look at it. Typically when I do interviews with people, one of the things I hear a lot is that I’m constantly busy and going, going, and going, but really I just think I’m efficient. I have a lot of time when I don’t do anything! I go for a walk, or go get ice cream, or go do yoga. I take weekends off. I’m not balls to the wall – when it’s time for me to work, then I’m balls to the wall. But deadlines are good for me, and I think my process after 25 years is pretty efficient. I can get a lot of stuff done in very little time if I put my mind to it. If you look at my work as being a 9-5 job, where I start working at 9 and quit at 5, I get stuff done every day and it just sort of builds up [over time]. Doing the book for example, maybe I spend three hours a day on it and then over the course of six months, it’s done! It’s not like I’m beating my head against the wall 15 hours a day trying to get this thing done. I just do little bits at a time and eventually it’s done. I do the same thing with all these projects.

We were just talking about the symphony – by the time it comes for me to really get started in December, that’s like a year from now! I’ve already got most of it written in my mind – so when that time comes…I’ve already started the artwork now, for example. I know where I’m going to record it, I know who is going to produce it, I know which symphony I am going to use, I know I’m going to mix it – all these things are kind of done and I’m working on other projects now. So when I finally do get to the symphony, the amount of effort that will go into actualizing it is basically going to be delegating tasks to people and overseeing it in a lot of ways. So the appearance may be that I’m cooking things up 15 hours a day in some science lab, but the reality is that I’m going to the mall to go Christmas shopping tonight [laughs].

Dead Rhetoric: That’s a pretty interesting way of putting it…is there a way that you keep yourself being efficient then?

Townsend: Yeah, I don’t go to parties and I don’t drink or do drugs. It’s the easiest thing in the world. Just have a fun-free lifestyle and then you get tons of shit done [laughs]!

Townsend: I’ve been 9 years sober. I don’t go to shows, I don’t like going to parties, and I rarely hang out with people other than work stuff, and I think about my work all the time. I really enjoy it. I enjoy gear, I enjoy the creative process, I enjoy the technical process, and I sort of absent-mindedly think about it all the time. So by the time I get to it, it’s already sorted out in my head so it’s a matter of just doing it. Really, I don’t do much other than just normal life stuff and absent-mindedly picking away at my process – it works great.

Dead Rhetoric: Another thing that recently came to pass was the ToonTrack stream where you wrote and recorded a song [in two hours]. Was this a different approach for you? Do you think that you got something new out of writing in that way?

Townsend: An ulcer [laughs]? What I did there, other than the situation not being optimal, is just what I do. It may have been a little more frantic than normal, and I wasn’t able to be as relaxed with the process because I was under the microscope, and there’s a timeline, etc. In that scenario, there was a lot of people watching it, but it’s what I do. In two hours, I was able to get a lot of things done and in normal circumstances, something like that might take 3-4 hours maybe, and then it’s done. That song, “Stars,” I think it was called or I think it will be called – I have no idea what I will do with that song. There are a couple parts that I don’t like that much, but overall it was kind of cool. That, as well, is relegated to the on-going stockpile of music. For example, if I’m doing something with DTP or some other thing, and I think, “Well, you know what would go really well right here is something more melodic or more dreamy sounding,” then the “Stars” song is one of several ideas that I might have filed away in that sort of category, and I might pull it out or might not.

Dead Rhetoric: I think that showing that side of you goes back to that same idea that we’ve been talking about – a testament to your efficiency.

Townsend: Efficiency is a huge part of it. I’m constantly reminded of the fact that I’m good at what I’m good at but I’m dumb in so many other ways. If people view efficiency as anything other than that – a sign of me being fundamentally different or more capable than anyone else to do these sorts of things, than perhaps they aren’t giving themselves enough credit.

I heard a quote the other day that I felt was great: “People who are organized are too lazy to look for anything.” I love that thought. I keep my world: my car, my gear, everything – I just keep it organized because I know that I’m absent-minded enough that if I need something, I don’t want to look through tons of shit. So if I know something is there or know how I do something, then I can spend tons of time doing whatever I want and still get a lot of things done! It’s really an important thing for people. Specifically these days…if I wrote the same way that I did when I was 15 years old, I wouldn’t write anything ever! Nothing would come out. I got high and sat on the stairs and fucked around with riffs all day. Nothing would get done! I had to find a more efficient way of doing things, and it works great for me. What I do works now. I’m full on! It’s not like I’m answering emails and doing everything – I’m like full on. But when I’m not working, I’m not working.

Dead Rhetoric: Which is always the best…

Townsend: I agree. I know if I’m not working, I can sit on the couch and watch Antique Roadshow and eat a bag of chips and not worry about it [laughs]!