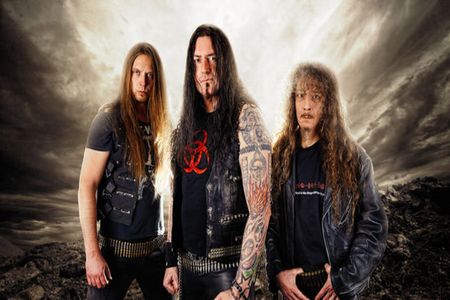 Dead Rhetoric: Out of the big four from the German thrash scene (yourselves, Sodom, Kreator, and Tankard), who do you feel more of a special kinship/relationship with? And were there other bands from that first wave that you seemed surprised didn’t break out bigger?

Schmier: Actually Kreator are doing pretty well at the moment. They aren’t comparable to Slayer or Metallica in terms of popularity, but for European standards Kreator are pretty big in Europe- also worldwide. From the friendship side I get along with all of those guys- especially Gerre, Tankard’s singer, also Tom from Sodom. He just wrote me lately that he wants to hear the new album, as did Mille from Kreator to hear the new songs. We don’t see each other that often because of touring, but when we see each other we are all excited. Of course there is a certain amount of rivalry between us, everybody is fighting for their band, but we are still good friends.

I think Assassin is the band that surprised me, Interstellar Experience is a fantastic album, and we all thought they were going to breakthrough. They split up one album later, which was surprising for all of us. Exumer also, the first album was very strong and then split up after the second album. At the time the problems for a lot of those bands were the expectations were too high, because of Kreator, Sodom, and Destruction breaking through at the time- the second wave didn’t make it somehow. That’s how it goes sometimes. Deathrow also broke up, Darkness broke up – those bands didn’t have a long breath. At the beginning of the 1990’s it was very difficult for a lot of bands because the Seattle music scene killed heavy metal at the time.

Dead Rhetoric: Where do you see the major differences in terms of Destruction’s output and popularity today compared to the first go around in the 1980’s?

Schmier: Nowadays we are much more famous than back in the day. The 1980’s… people glorify the 80’s, it’s great but it was the start. It was the beginning of something new, but for a while it was difficult to tour the world. We were supporting a lot of tours in Europe for Slayer and Motörhead, but we didn’t headline as much and there were not as many festivals back in those days. The touring thing is much better now for us. What was still going good back in the day was sales of an album. People were buying the vinyl. Nowadays bands just sell about 10-20% of what they were used to, because of all the internet possibilities. I love the 1980’s, but I’m totally happy with what’s going on nowadays. We are able to tour the world more than ever before, which is great.

Dead Rhetoric: Making a set list at this point, even in a headlining situation, could be a nightmare for Destruction. What discussions take place to pull together a balance between the old, the new, and possibly a couple of personal favorites amongst the band members?

Schmier: Yeah, it’s difficult. We try new stuff, or sometimes we dig out old songs and then play them again. Right away if you feel comfortable and if the crowd picks up on the songs, then you talk about it after the show. That’s what we usually do, we see how we feel. Sometimes there are songs that just don’t work live, they make the band stiff because they don’t feel natural. It happens with an old song or two, you won’t feel the song in the right way. We are now in the position that we can have a huge set list that we can switch around when we headline. I ask people in the audience if there are songs that they want to hear, and people scream for some tracks. Most of the time it works pretty well, sometimes they ask for crazy songs that we can’t play- but we bring back stuff from time to time, like “Thrash Attack”, this old instrumental song that we did a bonus track on the new album. It’s not so easy, and we have a new strong album that we want to present some songs from also. In the end, when we headline we play 100 minutes so that’s something you have to do.

Dead Rhetoric: You also did a cover of “Black Metal” from Venom with Alex of Krisiun for a bonus track, correct?

Schmier: We were at the Rock in Rio festival two years ago, it was a magically moment to play this song that means a lot to us- it all started with Venom back in the day. And then playing in Brazil with our Brazilian brothers, those goose bump moments on stage. If we were going to cover something on this record it was going to be “Black Metal”, and (we) asked Alex to join us. I think it turned out pretty cool.

Dead Rhetoric: Although in major Destruction mode as far as promotion and touring will go, can you foresee a second Panzer album down the line?

Schmier: It’s very difficult but I want to do one. It was great fun to do this and I know a lot of people that really liked the record. I would say there’s a chance next year, but now I’m in total Destruction mode so it’s hard to tell what’s going on. I would definitely say if I have time next year I will write some songs for this. The fact that I was doing Panzer actually was very good for Destruction because when I came out of the Panzer shows I was very confident in writing Destruction material again. It was a nice experience- it’s always good for a musician to work with different people. When you go back to your normal band, you come back with experience, it’s a big help. I think the Destruction album benefits from the Panzer record.

Dead Rhetoric: Have you been following the insanity of the upcoming American election for president – I’m curious to know your thoughts on where the state of the world is today and what needs to be really looked at for the future?

Schmier: Oh yes. There are so many problems in the world, when you see what’s going on even in Europe at the moment. In Poland the conservatives took over again, also in Hungary. They start to control the media again, the government. Even in Germany we have all the refugee problems now, it’s more of a right wing party getting strong again. And then we look to America, and we see a conservative idiot (in Donald Trump) that is hypnotizing the masses, it’s scary to see. I believe he’s going to make it, and I don’t believe it’s going to be good for America. I understand people are not satisfied with the government at the moment but I don’t think this guy will make it any better, it’s going to be a bigger disaster. The problem is, the only cool guy (Bernie) Sanders has no chance, at least for me that’s the guy that is the smartest of them all. Hilary ‘Blowjob’ Clinton as a president, isn’t that disgraceful for America? I stopped voting in Germany a year or two ago because all I saw was filth. The government was changing, different parties came in but nothing was really changing. I don’t believe in politics, the problem is we are getting ruled by the industries. It’s all about making more money, we all know that.

Dead Rhetoric: How does it feel to have second and third generation Destruction followers coming out to support the band at shows – proving that heavy metal is really a lifelong movement?

Schmier: Yeah, that’s something that actually surprises a lot of people. My friends ask me about the crowds when we play, and people expect it to be old farts like us coming to the shows. The opposite has happened- Destruction fans in most countries are 70-80% between 15-25, and of course the older people like us are still coming to the shows, but they have families and more young people are at shows. That’s a great thing, it shows that this kind of metal will not die out. The young kids are picking it up, non-commercial music and it doesn’t play on radio or television. When we started nobody believed this kind of music would go any further than out of our surroundings. Many people were laughing at us at the time. Even in Germany when we were successful in the 80’s people didn’t take us serious. Now 30 years later we are still here and there are a whole new generation of thrashers.

Dead Rhetoric: How does the rest of 2016 look for Destruction in terms of touring – any hopes to hit new territories you’ve yet to play?

Schmier: When we go to Latin America, we are going to play some new cities. We go back there every two years or so, and there’s a huge market down there. We will play some cities we’ve never been to before, some smaller cities in Peru and Chile. We played for the very first time in San Salvador, and Honduras also. It’s pretty exciting, because when you come somewhere for the first time, the people are crying. They are so happy to see you, they get so emotional it’s unreal and the best. We still are trying to explore new stuff. We want to go to some of the Eastern countries that we’ve never played before, Belarus, Georgia (near Russia), it can be very difficult to get there because of the economy, they have very little money to charge for shows because everyone is poor. It’s hard then to fly in the band and make a show happen. We are trying our best, we are not in this for the money, we are making this happen because we love it. It makes us more independent than bigger bands, we go in sometimes for smaller fees because we want to take the adventure and take the risk. Most of the time it’s worth it.

We will do September and October touring in Europe, and then November parts of Eastern Europe. From December to March 2017 I would expect us to hopefully come to the United States.